Okay, so I've been stuck on that Christmas song for three days. (I wish the Robert Earl Keene didn't look so much like, well, a creepy serial murderer in this video. Sorry about that.)

I know. Y'all, I KNOW. But you know what?  It could be the best collection of those random moments that happen whenever families get together ever set to music. It's kind of loving in its snarkiness. 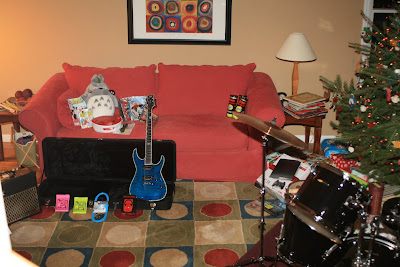 Christmas was lovely even though we were sadly lacking in extended family (and the associated drama) this year.  It was just the four of us and four pets, although two of them could easily have been the Bumpuses' dogs in A Christmas Story.  Santa proved to be a rocker when he brought the girls an electric guitar and amp and a full drum set as well as a blu-ray player disguised as a Playstation 3.  The girls (aided and abetted by Coop) gave me a new lens for my camera (which is totally the best lens I've ever had and makes me feel like a real photographer) and a certificate to a yarn store. I gave Coop a book and the tickets to the National Football Championship that he *** scored online.  (Coop did his graduate degree at UT and he's going with his father, who is an Alabama alumnus. It's a good thing they get along!) (***Yes, my streak of incredible lameness in the Presents for Coop arena continues unbroken.)

Then on Boxing Day (I just love saying that for some reason.  Boxing Day.  Boxing Day.  BOXING DAY!) we went over to our friends' house for dinner, ping-pong and knitting.  It was wonderful. 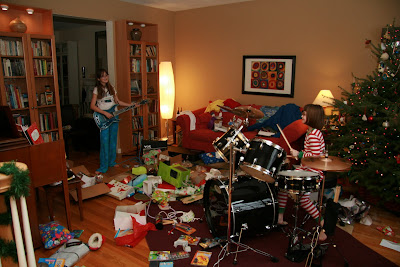 The day after Boxing Day, and the Day AFTER the Day After Boxing Day (BOXING DAY!), we just hung out.  Tried to not get buried under the mound of used wrappings paper.  Filled a sock with catnip and watched the cats try to act like it was perfectly normal for them to be doing 360's  flying down the stairs and landing on the puppy's head. Coop taught Ana (11) how to play both the beginnings of Tom Sawyer AND Highway to Hell on the new electric guitar, thus achieving the high-point of his parenting career.  Had some sleepovers, got excited about the prospect of more snow and bought stuff to make chili.  The chili prospects dimmed when the snow prospects dimmed.

I don't know.  It's been a pretty relaxed holiday so far.  But then again, as I told a woman at the grocery store last night, "Santa brought my daughter a drum set for Christmas.  I'm in no hurry."

Happy Holidays from the Fam-uh-lee-ee.
Email Post
Labels: Christmas Tree Light Battle Doesn't everyone? gratitude humor? I don't do linear--EVER Life in the Modren World parenting pets WHAT? Doesn't everyone?

sldill said…
As a South Texas native, I can say that REK completely hit the nail on the head with that song. I do believe that it is written and sung with love for this odd, different kind of Christmas. As I always say about my extended family, we put the fun in dysfunctional.
Your holiday time sounds delightful and relaxed and just as it should be. Here's to a fantabulous 2010!
December 29, 2009 at 10:56 AM

Anonymous said…
I love that song. Thanks for sharing the video.

The girls looked like they were having a great time.

Unknown said…
OH SERIOUSLY! A drum set? you are brave.