(I tried to post this all day yesterday, during what seemed to be a MONSOON.  Our Internet and cable and phones were all completely out.  Today it is beautiful and sunny and cold and I'm tempted to just say, "Never Mind!" Except, you know, I had to go run errands in that mess yesterday and I may be traumatized for life.)

So, last year was really our first winter here in New York and the season went out of its way to be ENCHANTING. I couldn't understand what all these people were talking about when they groused about the horrible weather and the ugly snow and the long, long, gray, soul-sucking winters. I found the snow CHARMING --light and fluffy and falling usually on the weekends so that my kids could have fun and exercise by sledding down our mammoth driveway.

Today, however, I get what these New Yorkers were talking about. Today when I woke up, the ground was covered in snow! YIPPEE! Except, dudes, what were those gusts of little rocks flinging themselves at my windows? Oh, that would be sleet. And really big gusts of windy rain. 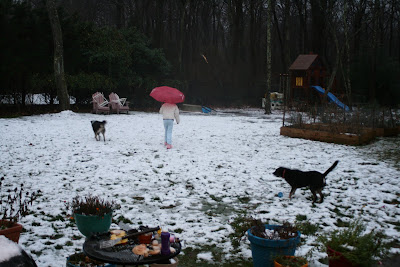 Jane (9), naturally, feels the same way I do about the snow, though, and she gamely got bundled up and went outside in it. Until the puppy knocked her down in his exuberance. (The PUPPY, also true to form, thought the snow was for EATING.) (In the picture above, the puppy is the large one. He'll be ten months on the 14th.) (Not that I'm concerned or anything.)

Ana (not a teenager, although she plays one in real life) refused to show any enthusiasm for anything.  Anything at all in this world, which is terrible and this weather, which is terrible, and school, which is terrible.  Of course, as SHE was getting out of the car to walk into school, her umbrella blew inside out (it's one of the umbrellas we bought at the Tour de France which cost a small fortune and is utterly, utterly worthless.  Except for the cute French writing on it.) thus completely reinforcing her mood.  (Poor little one.)

But anyway, this brings up something that I've thought before but never really mentioned.  Why is it that there are so few covered walkways here on Long Island?  I mean, we had them all over the place in Austin (probably to protect us from the broiling heat.)  I don't get it.  We don't even have some sort of covering over our front door so if it happens to be raining when our guests come over, they have to stand in the rain until we can beat the dogs back and open the door.

Also, why do none of the bathrooms in our house have heat lamps?  We had them in Austin and we used them at least three times a year.  Here, we could pretty much use them every day from November through April and there's nary a one to be found. In fact, we had to install an extra outlet in our master bathroom so we could plug in a space heater.

We don't have a gas starter in our fireplace, either--you know, a gas line that starts your firewood burning?  No one I've talked to has ever even heard of one of those up here but in Texas, they're kind of standard equipment in houses with fireplaces.  It just seems odd to me that the weather is such a force up here and so few concessions are made toward making living with it a bit easier.

Maybe we Southerners are just wimps when it comes to the cold and these New Yorkers are a hardier lot?  But then again, maybe these New Yorkers could learn a thing or two from the South. That's probably just my cold feet talking...

Actually, you know what?  Maybe we ALL could learn a thing or two from our cats.  This is what I found when I went upstairs a bit ago: 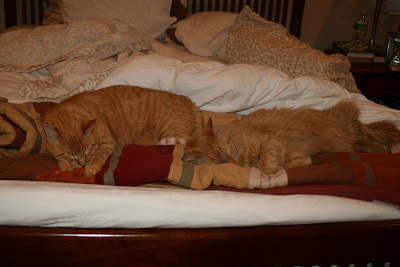 Kathy Ireland said…
Dude! See? Now that you live in the north, I bet that your main topic of blogging and conversation will be the weather, just like it is here. It's the first thing we do every morning - look out the window and turn on the weather network! At least it didn't start til December this year.
December 10, 2009 at 11:12 AM

LaDonna said…
I may or may not have commented last year, but I was giggling every time you posted about how beautiful and enchanting the snow was. I wondered how long it would take before your enchantment turned to disgust. In Fargo, we've only had 3 inches of the stuff and are only on our 3rd day in a row of sub zero temperatures, but I'm already wondering when spring is going to arrive.

I suppose, thought, if you haven't lived with it your entire life, it is kind of fun at first. When we moved to Seattle we thought the rain was beautiful and laughed at how we were real city people wheneven we had to sit in grid-lock. That all wore off after awhile. Just takes some adjustment and realizing that this is the reality of your world now, not just some place you're visiting temporarily.

And yes, I agree with Kathy above me...even my kids do it. Before they even get dressed in the morning, they come out to the living room and turn it over to the local morning news show so that they can see how cold it is. When they see negative numbers they mumble under their breath (gee, where'd they get that from?) before grabbing a few extra layers and warmer socks.

I do, however, think that the difficulty of our winters makes us appreciate the spring and summer that much more. After the horrible winter last year and the spring flooding, I never even once heard my hubby complain about the heat last summer.

Heidi Malott said…
Hah! You have some great points Barb. Maybe New Yorkers would be a happier bunch if they had such things. The weather is pretty much the same here in Indiana as New York and I haven't heard of or thought of said amenities either. hmmm...
December 10, 2009 at 11:40 AM

LaDonna said…
Oh, and by the way, I agree about the covered walkways...we finally got them at work. Installed this past summer as part of our building renovations. Only problem is that while they're completely covered and enclosed, they're not heated...wet or dry, windy or still, negative 6 degrees is still negative 6 degrees.
December 10, 2009 at 11:47 AM

ToyLady said…
You know what's a fun game with the puppy? Take a loosely packed snowball and throw it up in the air. When he jumps to catch it in his teeth, it kind of . . . explodes in his face! I can amuse myself (and our puppy) for HOURS doing that!
December 10, 2009 at 11:47 AM

hollygee said…
I always wondered why Seattle didn't have more covered walkways. Hello? It's Seattle -- it rains a little bit.
December 10, 2009 at 12:33 PM

Unknown said…
cats definitely have the right approach to any and all weather: sleep.

Suburban Correspondent said…
I'd never even heard of covered walkways. Heat lamps in bathrooms? Wow - you Southerners know how to live!

I also think that your house is probably newer (i.e., cheaper cookie-cutter construction) - the older homes have entryways, etc, that are more suited to the climate. The past 40 years or so, people haven't thought about that as much. Also, older homes have radiator heat (aaaahhhhh!) which works better than forced air for heating. We used to hang our bath towels on the radiator so that they would be toasty warm after our showers.

But, like one your commenters said, Northerners appreciate the spring that much more! Strength through suffering and all that...
December 10, 2009 at 5:09 PM

Ann in NJ said…
Mineapolis is full of skyways (connections between downtown buildings so you can walk around without going outside), but New York is kind of in-between - not so warm that you don't miss that sort of thing, but not so cold that you need it all the time. Bundle up - hello, isn't that WHY you knit? Hats, mittens, scarves, you'll never appreciate your knitting more!
December 10, 2009 at 10:18 PM

I wish we had more covered walkways in Michigan too; and I absolutely agree about front doors with covers/awnings for visitors.

Some of our downtown areas have heated sidewalks to melt the snow, which is really nice.

We have a heat lamp in one bthrm, I love it--my husband says it's an energy-sucker (of course). I'd rather have towel warmers though.

Now the gas starter in the fireplace is intriguing. I think it would make me a little nervous to have a roaring wood fire next to a gas line. I'm still loving the invention of the hand-held gas starters, I didn't know about this! MIME
December 11, 2009 at 7:48 AM

Anonymous said…
Barb! yes!!! how I miss those nice amenities when I lived in Texas!!! Here in the NorthEast, covered walkways would most likely end up as covered skating rink. :)..

As for Ms Correspondent's comment of "your house is probably newer (i.e., cheaper cookie-cutter construction)"
Tsk Tsk Ma'am - stay in your own backyard. Just because something may be of a younger age, doesn't make it lower in quality...
December 11, 2009 at 8:23 AM

Kathy Ireland said…
My BIL and SIL have a beautiful "old" house, you know, not a cheap cookie cutter house like yours (0_<) (that's me winking) and when they reno'd the bathroom, they put in a heated floor. Now THAT'S my idea of luxury!
December 11, 2009 at 1:15 PM

Barb Matijevich said…
I just want to be really clear on this: it may be newer construction. It may be cookie-cutter. It may even be shoddy and ramshackle.

But it is NOT cheap.

And, y'all, I wasn't complaining about the winter (except the weather on that particular day.) I like having seasons a LOT. I just think it's very interesting that so little is done to make them more livable. I mean, I HATE dropping my kids off in the rain--it wouldn't cost that much to cover a small section of the front walkway so that they aren't damp all day.