And Now for Something Completely Different from THAT

So, it was with fear and trepidation that I posted my last post about how I had lost my faith in Lance Armstrong. I was honestly worried that I would get hate mail from Lance supporters. I posted it once and then took it down, let myself sleep on it, and then posted it again.

As it turned out, you didn't much care about Lance. "Lance who?" you seemed to ask. "Lance is so LAST DECADE."

It turns out, though, that what y'all really wanted to talk about was my giraffe shirt and the wisdom of wearing such.

The truly best part about this shirt is that it has stitching that adds texture to it.
(My husband said, "That's either the best shirt or the worst shirt ever.")

The thing is, that's not even the worst shirt I own.

*****************
This week my girls have been in sailing camp, through the Huntington YMCA. It's been a really good experience and a good camp and they are actually SAILORS now.
The thing about this camp is... everything about it was pretty fun, except the counselors.  A couple of them were really nice and seemed to remember that camp is supposed to be, you know, FUN, but then there was the usual contingent of Surly and Superior. I did my thing where I take the head counselor aside and explain that we're from the South and we really don't respond very well to people yelling at us and then things seemed to get a bit better, but really, should I HAVE to do that?

Oh well, the girls had a pretty fun time and learned a new skill and Ana made a new friend in the form of her sailing partner.  But we seriously thought about doing another week of this camp --which is pretty expensive --and now I don't think we're going to because it just wasn't as fun as it could have been.

I know you all were wondering, "WHERE are the pictures of the tomato sandwiches???"


It is taking FOREVER for my tomatoes to ripen.  Last year, I'd been eating tomato sandwiches for two weeks by now. I did get an inkling that the harvest is coming along today ( 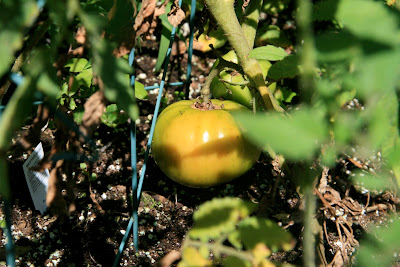 I will confess that I panicked a few weeks ago thinking I had forgotten to plant jalapeño peppers this year.  So, I planted a couple of extra plants just to be sure we'd have jalapeños...

Email Post
Labels: Am I Out of My Freaking Mind? Farmer Barb gratitude Homegrown Tomatoes humor? Maybe I Should Just Shut Up Not enough therapy in the WORLD perspective summer The Jane Cooper Experience

Kathy Ireland said…
Isn't summer the best? I am absolutely in-love with summer this year. I don't know why but all I want to do is be outside - eating, reading, walking, drinking (well, not drinking actually) but I'm feeling so happy about this fabulous weather.
July 15, 2011 at 2:12 PM

Suburban Correspondent said…
hmmm...maybe you could make jalapeno pepper sandwiches while you are waiting for your tomatoes to ripen?
July 15, 2011 at 3:49 PM

Ann in NJ said…
Could make jalepeno pepper jelly to pour over cream cheese and scoop up with crackers....mmmmm. A lovely combination of sweet and hot and creamy.

And if you need a salsa recipe when the tomatoes finally come in (ours are being lazy, too), The Pioneer Woman's Restaurant-style salsa is excellent. Customizable for Texas-style heat, even.
July 15, 2011 at 5:35 PM

absolutelytrue said…
I totally love the giraffe shirt. I want one. Badly.

Anonymous said…
The giraffe shirt is way cool, and your lily shirt just shows that some folks wear their art on their sleeve.

Susan said…
My tomatoes are in the same state - but we have been having strangely cool weather so I think they don't know it is time for tomato sandwiches.

Only in NY would they have cranky summer camp leaders!