I have really big news that is just burning a hole in my pocket, but I can't share it yet because I am weirdly superstitious and everything could still fall through and then I will look even more like an idiot than I usually do.

Instead, I give you the other big news of this summer, which is that our garden is kind of a bust this year.

It's just a very, very different year for us in terms of the garden.

LAST year, I deemed the summer the Summer of the Garden. If you click on that link (I know you won't but if you DO), you will see a mountain of tomatoes and masses and masses of cucumbers.  We called it Mount Cucumber. This year we got ONE full-sized cucumber.

We had more corn this year and the tomatoes are FINALLY coming in. 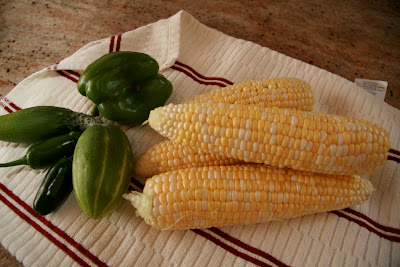 But the really, really big crop this year is peppers.  Peppers of all kinds.
Including these little bitty adorable red peppers that look like tiny bell peppers (my favorite) but (and don't ask me how I know this) if you bite into one, the FIRES OF HELL appear in your mouth.
I don't even know what they are--I THOUGHT I was planting red bell peppers, as I do every year.

After I salvaged whatever remaining skin I had on the roof of my mouth, I drank milk and ate a piece of bread and hopped around my kitchen saying almost-curses ("Oh, MARTHA!"), much to the hilarity of my children.

And then I rubbed my eye.

Which was just incredibly stupid. I don't want to discuss it.

There was only one way to assuage my pain. 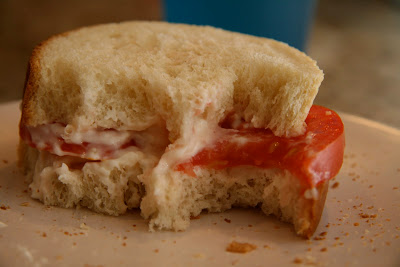 ToyLady said…
Eye-rubbing is bad. I blew my nose after cleaning a mess of jalapenos - ended up just smearing sour cream all over my face.

Sandra said…
I canned salsa last year and managed to sear every orfice on my face, and elsewhere, with jalapeno juice. Even sitting here now, I can still feel the burn.
August 12, 2011 at 11:15 AM

momwhoknits said…
I once did a salsa-athon with several friends. As the salsa cooked and more wine got opened, we did what Sandra did and got jalapeno (and scotch bonnet ) juices on our hands and face. One of the women had a very BAD reaction - so bad that she called Poison Control. The very nice woman on the other end told her to try alcohol. She responded that we had already had 3 bottles of wine - and now we were supposed to drink more? I still giggle every time I think of what the woman's reaction must have been after she hung up the phone.
August 12, 2011 at 11:27 AM

Kimos said…
I'm pretty sure the evil red pepper is a scotch bonnet. They have many disguises.

Susan said…
I have one loney tomato plant on our upper deck to keep it away from the critters - it has delivered 3 lonely tomatos! Meanwhile a volunteer cherry tomato plant is growing unmolested in my garden!

Susan said…
I have heard that the smaller the pepper, the hotter it is. Your tomato sandwich on home baked bread is making my mouth water. My tomato plants are dripping with tomatoes this year but they are still green. We had the dreaded tomato blight last year that killed the tomatoes overnight so I keep watching mine this year and rejoicing that they are still healthy. Last year's blight made me want to cry.
August 12, 2011 at 3:01 PM

Judy said…
The sour cream all over the face comment still has me snickering - lol. I don't think I would plant peppers of the hot variety - just too sensitive to it all. At Chili's once they mixed the pico de something scorching with the regular salsa - they brought out the bowl of sour cream at a full-tilt run.

Carole D. said…
OMG - that one had me laughing like crazy at you jumping around and the pain you were in and then rubbing your eye on top of that! I'm sorry, I just roll that way. Make some salsa, but make sure you remove the white stuff (I know there is a name for that, but at the moment I can't remember what it is - middle age you know) and the seeds first so you don't kill anyone!
August 13, 2011 at 1:55 PM

LaDonna said…
OMG, Barb! Ship some of those jalepenos and those little red HELL FIRE peppers my way :) My hubby makes a very yummy salsa...last year we canned about 2 dozen pints and they were gone by April. This year, we want to do 3 dozen and for him, the hotter the better. :) We'll be starting our pepper hunt as soon as the tomatoes around here are ready.
August 14, 2011 at 4:36 PM