So, I Live in Austin Now

I understand now why people live in one house for all of their lives, or at least the same town, or maybe why people become agoraphobic, or refuse to make connections with their neighbors, or become hermits and move to tiny caves in the middle of nowhere.

Because goodbyes?  Are just unbelievably painful.  Even when you know you'll see each other again, even when there is Facebook and email and free long distance and Skype, there is just no way to make saying goodbye easy.  I walked around for two months on the brink of tears and then, during that last week, as I took my last yoga class in Northport and saw my acupuncturist for the last time and our vet and Elmer and said goodbye to the things I love and hold dear in New York, I was just wrecked.  Just WRECKED.  I stopped sleeping. I cried a lot. I held my girls as they said their goodbyes and cried. Change is hard.

And then we packed all of our stuff and moved.

Which, um, wasn't as easy as it sounds, either.

For one thing we had to figure out how to get all of our cars and stuff and all of our people (furry and otherwise) to Texas. In July. As I write this, Coop and Jane are finishing the final leg of their car trip here from New York with the dogs. This was not as easy as it sounds, because Scout is INCREDIBLY car sick.  But we got tranquilizers for the poor dog and he's done just fine.  Look:

(I laughed so hard I was ashamed of myself.)

Later, the update said, "Scout is handing out flowers to the National Guardsmen and staring at bright lights."

Kath and I flew down on Thursday with the cats.  Unfortunately, and unbeknownst to me, Thomas is ALSO very car sick. I was covered in cat vomit before we even got to the airport. But nothing further happened that was traumatic unless you count the fact that when we went through security, where they made us get the cats out of their carriers, Edward pooped while I was holding him. Poor little guy was so freaked out. It didn't help that the TSA attendant had clearly never seen poop before because she kept shouting, "WATCH WHERE YOU STEP" while I, still holding Edward, cleaned it up.  Then I had an encounter with a drunk and incontinent woman in the restroom and by the time we got on the airplane, I was smelling pretty good, as you might imagine. This worked in my favor though, because the guy who bought the seat in between Kath and me changed seats before we'd even left the gate.

The rest of the trip was uneventful, except for Thomas's yowling, but by that point, nothing could have embarrassed me. We landed in Austin, took a Taxi (which took a wrong turn but since we're from here, I could totally help the driver get back on track) to the new house to find that my beloved husband had set the place up for us during an earlier visit at the beginning of the month.  He'd had the new washer and dryer installed, filled the fridge with vegan treats for me and Amy's ice cream for Kath. He even set up cat boxes!

I unrolled my yoga mat in what will be the yoga studio and just like that, we were home.

A few pictures from our first 24 hours here: 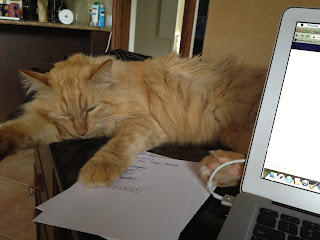 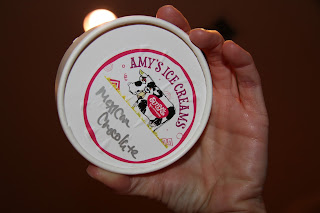 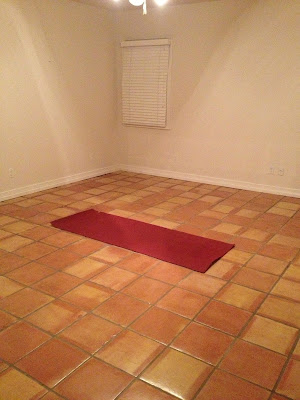 smalltownme said…
Hello from your friendly agoraphobic hermit! We've sunk a 25-year taproot into this house. I can't imagine ever dealing with a move. You are awesome!
July 31, 2013 at 12:32 PM

Ann in NJ said…
You are lucky to have some awesome support people! Soon enough the trauma of the move will seem like a distant dream (except for missing people, that takes a while). And the cat stuff will make a funny story. Eventually. Who said, "tragedy plus time equals comedy"?
July 31, 2013 at 2:14 PM

Suburban Correspondent said…
Moving is always traumatic, if only because you realize how much STUFF you have. One of my friends swore that she would never move again, unless it was to some sort of ashram/convent/whatever that required her to get rid of all her worldly possessions.
July 31, 2013 at 4:37 PM

LaDonna said…
Welcome to the club of cross country moves - twice! I remember the trauma of moving to Seattle and the trauma of moving home again. And we did it without pets! So sweet to see that Coop had you covered and provided you with at least a few creature comforts while you waited for your "stuff" to get there. Good luck settling in, and congrats on your move back home! Enjoy!
August 1, 2013 at 12:53 PM

Susan said…
I don't plan to have another pet until we are settleing into the forever house! Glad you had so much help and support and that you settle in quicly and much more painlessly!
August 20, 2013 at 10:47 PM

Farrah | Free Animated Clipart said…
Looks like you have a lovely place and I must say that the picture of your dog caught my attention. He's such a darling!
October 23, 2013 at 12:02 AM