Hello? Hello? This Thing On?

It's true: I am resurrecting the blog because I am embarking on a new adventure called, "My Baby Graduated From High School and We're Both Going to College."

Well, okay, it's not really called that.  I guess it's called Life.  I'm on a new adventure called Life. With an emphasis on higher education.

So, FIRST, I must thank you.  Thank you for donating to LASA in order to update the ancient computers. We had the most successful fund raiser in the school's history! It was so successful, in fact, that I got drafted to help with the campaign again this year. (Which...I...am flattered? And stupid?)  I just couldn't say no--the school needs help and the kids are so, so worth it. So I am helping raise money even though I NO LONGER HAVE A CHILD AT THAT SCHOOL. 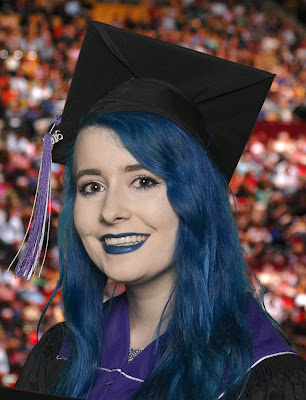 And honestly, I wasn't sure it was going to happen. Vega got really sick in her final semester. REALLY sick. She missed three-and-a-half months of school, spent six weeks in a wheelchair, and in general had her life torpedoed. Starting in February, she fell ill with a myriad of symptoms, including severe abdominal cramping and random fainting--which was a lot less exciting and more terrifying than I can describe here.  After an ongoing series of appointments with specialists and increasingly invasive medical procedures including a pelvic ultrasound and the wearing of a heart monitor for several weeks, we received a final diagnosis of vasovagal syncope (possibly triggered by the rupturing of an ovarian cyst.)

There are things I want to say about this, but really, suffice it to say that watching my kid be that sick with absolutely nothing I could do about it and with no reassurance that this wasn't something extremely sinister was pretty much the most terrifying and terrible time in my life. I have a different compassion for people going through catastrophic health concerns with their children. It is horrific and relentless and unbelievably stressful.

We were enormously relieved that her symptoms began to lessen and that she was able to return to school in April. I am deeply indebted to the staff at LASA for supporting Vega while she was ill, particularly Shannon Bergeron, her academic counselor, who I’m convinced is hiding angel wings under her jacket. (Ms. Bergeron just started a college counseling business.  I've already signed Jane up. I cannot say enough about her --just the wisest, calmest, most supportive and competent person you could ever hope to have in your kid's life. Go here and show her some love.)

So, Vega's not well, exactly, but she's learning to manage her symptoms and the symptoms seem to be getting better. Which is good because in about six weeks, she's off to the University of Southern California as an astronomy major.

Yeah, I didn't actually see that one coming, either.

Except, maybe I did. 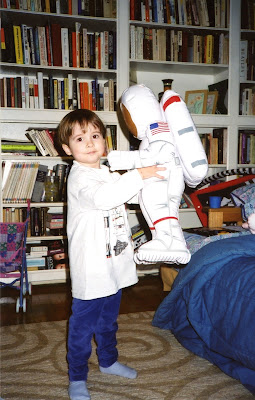 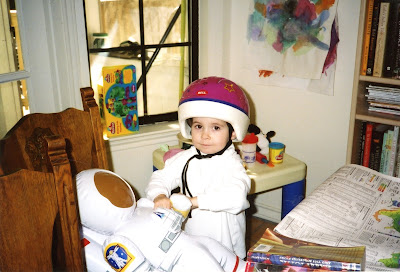 So, yeah. She's off to college and thrilled about it. Really thrilled and so ready.

I know what you're thinking and I'm really NOT. I'm not worried or sad or grief-stricken. She's ready and I'm so excited for her.  Plus, you know, I'll let you in on a little secret: They leave before they leave. This entire last year has been a series of small goodbyes.  It's the way things are supposed to work. I'm very close to Vega, and I'm really secure that that won't change. I love her so much. I can't wait to see what she does.

Plus, I'm sure Jane (15) would appreciate it if I didn't take to my bed for the next six months since she's learning to drive and can't wait around for me to have a breakdown.

And ALSO, I'm going to graduate school to get my Masters in Counseling. I KNOW, what? I'll write more about this in an upcoming post, but I've felt this calling for a long time so I'm doing it.

Rhonda from Baddeck said…
I'm so happy you're blogging again! Can't wait for stories of college life - yours and hers - and Jane's adventures with high school and driving, And, of course, the critter antics, and whatever you want to write about what Coop's been up to. (And I see you have a little game we can play to verify our human-ness -fun!)
June 29, 2016 at 12:09 PM

Anonymous said…
So first...blogging again! YAY YOU! Vega graduating...YAY VEGA!! I love her determination in not letting her illness stop her. So happy to hear that she's feeling better and will be soon spreading her wings. Your comment about them leaving you before they leave you....oh so true. Paige left long before she moved out, and even though Marissa is only going to be a junior this coming year, I see it coming with her already, too. You know that they're ready, but that doesn't mean you have to be ready. Jane driving...YAY JANE!!! But holy heck, when did THAT happen?! I don't know, I was hoping that SOMEBODY's kids could stay frozen in time since mine seem to be on fast forward. Just wait until you have only one at home. It's a whole different experience. Anyway, glad you're back!!!
June 29, 2016 at 2:07 PM

Shaatzie said…
Life wouldn't be the same without the teen-age years. Exciting for everyone. And exciting doesn't express all the angst that goes along with it.
Good for you going back for your masters.
Look forward to more updates in the future.
A faithful follower, Shaatzie
June 29, 2016 at 2:14 PM

Unknown said…
So true....they leave before they leave. We spent a year doing little things together. Got my soccer boots back out and spent a season playing on womens football team together....mother-daughter combo �� did various little road trips, watching her fav tv shows on record, watching all my fav old school movies. These and more done together in our year of goodbyes. She's 5 hours drive away at Victoria University majoring in cell & molecular bioscience. I miss her everyday and so proud of the young adult she become. So fiercely independent and focused. I think I may have done something right :) xx
June 29, 2016 at 3:17 PM

Becca said…
I'm so happy that Vega is doing better! My daughter had a catastrophic health scare back when she was twelve. She said Jesus told her He would be with her through it! Spent two weeks with her in the hospital while the CDC tried to figure out what she had, yet never did. Thought we were going to lose her, so I know exactly how you felt. I felt totally helpless. This was the moment that solidified the concept of doctors "practicing" medicine. Fortunately, she only had a couple of minor relapses while she was 13; nothing now. She is now 22. Where does the time fly?

So glad you're going for your master's in Counseling. You're going to be an awesome counselor! I have only two semesters to go to finish my Master's in Fine Art. It's amazing how focused I am as an older student v.s. my younger days. so don't worry; you've got this!!!
June 29, 2016 at 4:00 PM

psam ordener said…
Gosh it can't be time for little Ana (as she was then) to go off to college!

I am grateful that she has a diagnosis and is getting well. I assume that means she has been told how to manage her symptoms and what to do when if . . . It was hard to me to let mine go even though he had demonstrated often that he could manage his severe dairy allergy quite well. As he did.

Tenna Draper said…
Glad to finally hear from YOU! Wonderful about Vega. She is going to LOVE being in college! It is SO MUCH FUN, with so much work, but so worth it! And Jane is DRIVING??? OMG! How swiftly time passes, yes? Every time I look at my 38 year old son, I see the little boy I raised, and I wonder how I survived it. I REALLY wonder. I guess raising a boy is different from raising a girl. I often wish I'd had one, but there you go. I think I was smart to stop at just one, since I had a difficult time handling that one!