So, yesterday the awesome house cleaners came back. My husband has invited a colleague from out of town to stay with us for a few nights starting Sunday and I used that as my excuse to have the whole house cleaned. In all honesty, I was just so far behind that it was sort of important to my mental health and, well, niceness that my house be clean. All of it. All at the same time.
Because some days it feels like all I do is clean house and still, it never gets all the way clean. All at the same time. 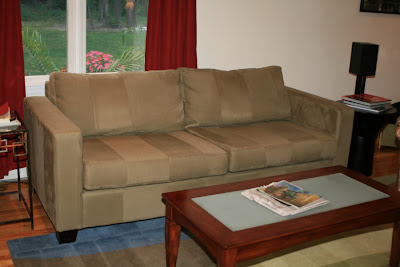 I only took the one picture because the only time the cleaning crew could come yesterday was at 5:00 and we were having a few of our neighbors over for dinner at 6:30. So the cleaners were still here when our guests arrived, which was a little awkward but they (especially the women) understood and everyone was very gracious about it.

We had invited a few of our neighbors for a casual cookout because it seems to me that the more we host these little get-togethers, the more at home I feel up here in this strange land. In a few days, we will celebrate our six month anniversary since we moved here and I still have days when I really miss our life in Austin.

I don't quite have the hang of things up here. Like, sometimes I think I'm TOO casual in the way I invite people over to our house. Because one of my neighbors showed up with wine, ice cream, a salad, macaroni and cheese (homemade and the best I've ever eaten) and get this, an entire London Broil. I don't usually invite people to dinner and then ask them to BRING IT so I was a little embarrassed. And then she practically cleaned my whole kitchen at night's end. My other neighbor brought some sausage to grill (from a place called, I am so serious, "Mr. Sausage.") and an entire New York cheesecake (the best I've ever eaten) and some little cannoli and assorted other sweets. And at night's end, SHE asked if she should give me some money toward the dinner.

(Actually, I think she was just joking about that since I had been going on and on about how I now do all of my cooking (practically) at Delightful Dinners. Because I know we're from Texas and not quite wise to the New York way of doing things but I'm pretty sure people up here don't invite guests for dinner and then pass the hat!)

I sent everyone home with jars of tomato sauce from the garden --sort of a New York twist on the cans of black-eyed peas I usually give out at New Years.

Anyway, this morning I went to return my neighbor's mac and cheese dish (and beg for a recipe) and I was sort of thanking her and apologizing to her at the same time for all she'd done, including all that work in the kitchen. And do you know what she said?

She smiled at me and gave me a hug and she said, "That's just what we do in my family when we all get together."

Dudes. I almost cried. Is that about the nicest thing you've ever heard? Maybe we DO have family in New York.
Email Post
Labels: good friends gratitude Happily Ever After I heart New York The Great Cooper Move

Miri said…
First: Oooh, the stripey couch again. You have inspired my envy from across the country.

Second: I think just possibly you have very, very nice neighbors who love you already and wanted to not put you out too much when you are clearly such a hospitable person.
September 6, 2008 at 2:26 PM

Suburban Correspondent said…
Yes, we're very potluck-ey people. Fancy Southern hospitality scares us sometimes - you know, where the hostess does everything and everything looks so nice? Because we're used to pitching in and bringing stuff and all...
September 6, 2008 at 2:38 PM

Barb Matijevich said…
Oh, I thought Southerners INVENTED pot luck dinners. I thought it was kind of a Bible Belt sort of thing. But either way, I doubt very much that anyone would ever be intimidated by MY fancy (um, NOT) hospitality, southern or not.
September 6, 2008 at 2:49 PM

Sherry Sea from Austin said…
Ok, I'm a dinner party snob. Not long ago, the mother of my daughter's friend, who I'd bonded with because she, too, had lived in Europe for many years, invited us for dinner. She didn't ask us to bring anything. She took the dishes to the kitchen and stopped working so no one felt compelled to join her. I nearly cried. It was beautiful to have someone take care of me, and to take care over every detail. I'd forgotten what it was like, this dinner party ethos I'd once known so well: "I invite you over to give you a night off. You can do the same for me, one day." With joy, I invited her family to share a slap-up meal with us a few months later. Yes, it's exhausting when it's your turn to perform/shine, but still quite rewarding in its way. Of course, not every occasion with friends can or should be a formal dinner party, but when you can find time for them, indulge!
September 7, 2008 at 12:05 AM