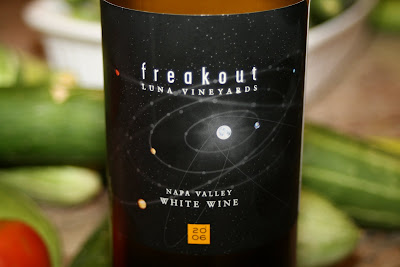 In which I complain mightily and it becomes apparent once again that my mental health is not really getting its apple a day, if ya know what I mean.

I should preface this blog post by saying that almost everything that happened yesterday was my own dang fault, but I am not going to do that.

Because I don't want to.

I should tell you all how grateful I am to have been mobile enough to get through yesterday mostly without pain, but I'm not going to do that either.

Because I don't want to.

(Just so you know where I am as we embark upon this adventure together. I am crabby. Almost unapologetically so.)

Okay, so yesterday morning was orientation for Ana (11) at the Middle School. We were to be there by nine o'clock and due to a bit of double-scheduling on my part, we had Ana's best friend Nina over to spend the night. She had to go to the orientation, too, so this was not problematic unless you were hoping that your child would have a good night's sleep before being ushered around her new school. I think the girls finally fell asleep around midnight.

(Mistake Number One, if I were given to admitting to them. Which I'm not.)

Nina's mom, Two-N-Anna, picked us up at 8:30. We left Jane sleeping but I had warned her the night before that we'd be gone when she got up and to make herself some toast, feed the dogs and practice her piano before she got on the computer. I hate to leave her alone, though, even though she's given me no cause to worry... it's just pre-programmed that, as a mother, you will fear the worst.

We got to the school before 9:00, but it turned out that the kids were just having breakfast for the first half hour and parents were excused to go stand in the main foyer and have snacks. I needed to put something in my stomach, but all I could find was a very rich, iced brownie (Mistake Number 2) and this, combined with the noise in the small entryway, immediately triggered the onset of a migraine.

At least, I THINK it was the super sweet snack combined with the noise. It MIGHT have been some sort of latent Post Traumatic Stress Disorder at finding myself inside a Middle School--scene of the worst years of my life. All public Middle Schools smell the same, you know.

Anyway, finally, we were allowed into the auditorium with our kids. The Principal, with whom I am seriously impressed, gave a very professional presentation about the school which touched on rules but was basically geared toward allaying the fears of the kids that they would never be able to find their way around the school and would be late to class because they'd gotten lost and that they'd be the only ones who ever got lost and that everyone would look and laugh at them.

By this time, my anxiety level on behalf of my perfect, sensitive, smart and in every way lovely Ana was high enough that I pulled out my sock and knit a few rows to calm myself down. Unfortunately, I finished the sock before the kids got their schedules (Mistake Number 3) and had to sit there for the rest of the time, playing endless loops of the horrors of my own Junior High days in my head while I watched my tall, willowy daughter --you know, the one I brought home from the hospital YESTERDAY?-- compare schedules with her friends.

Then we toured the school for what felt like about three months while the girls found their classrooms and the gym and the cafeteria. We left and picked up Jane and I took the girls out to eat lunch. We went to a place called Friendly's, which is not my favorite place but the girls will eat there and it's--hahahahaha--fast. We wanted to meet back up with Two-N-Anna for shopping later.

I should have suspected something was up when it took us about twenty minutes to be seated, even though there were open tables. We stood behind this woman who was holding forth on her very decided opinion that life sucks and then you die, and then you are dead, dead, DEAD, I tell you, DEAD. (So, she's just bellowing all this stuff out a way that makes it clear she thinks she is a witty and cynical worldly sort of person and then she notices that I, with three children in tow, am standing right behind her and she says, "Oh, I have an AUDIENCE" in this incredibly snarky way. Lucky for her that I had already lost the will to live at that point because I could have told her exactly what I thought of her profanity-laced lecture on the futility of life. I mean, Good GOSH, Woman, get a puppy or end it all!)

I will spare you all the gory details of our disastrous trip to Friendly's except to tell you that it took more than TWO HOURS and we left before we got our free dessert. At one point, Jane held up this sign. 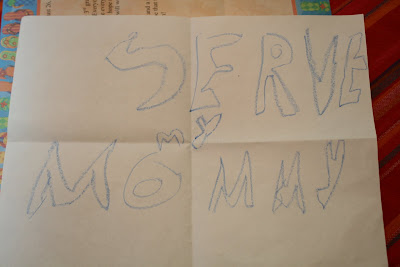 I was on a very slippery, slippery slope, not helped at all by the fact that we sat next to a mother and her maybe seven-year-old son and she brow-beat him full-voice the entire time. All about how unhelpful he was with the back to school shopping and why wasn't he eating more of his dessert, he always ordered these huge desserts and then only ate half of them and it was driving her CRAZY... He finally got up and LEFT the building. Also not helping my general, trying-to-ward-off-a-migraine-and-a-major-blood-sugar-crash was the fact that I had a strong suspicion that the bun to my grilled chicken sandwich, once it finally, finally, endlessly, I-could-have-raised-a-chicken-in-the-time-it-took arrived --might have fallen on the floor back in the kitchen.

We made it home and made s'mores, because when deprived of free dessert, it is necessary to improvise. (Since I was lacking in a bonfire at the moment (unless you count the one raging in my head), the way I made them was to skewer five large marshmallows on a wooden skewer and then place it on tinfoil inside the toaster oven, setting it to broil. Turn once and you have lovely, melty marshmallows to go along with your chocolate bar and graham cracker.) The girls left for shopping and I got a chance to lie down on the couch for a solid hour of napping. I woke up feeling much better and then we had piano lessons at our house.

My friend Sherry brings her daughter to our house for lessons to make the commute a bit easier on our fabulous piano teacher --plus this gives us a chance to drink wine and talk about stuff. (And knit. Sherry is a wonderful knitter.) So we sat and talked and I told her about my day and how disconcerting it was --both the Middle School stuff and also the Non-Friendly's fun. We decided to all go to eat at my favorite restaurant. It was sort of a do-over for me.

So naturally, we got put at a table in the back and the wait staff seemed overwhelmed. We had a good meal, but then things degenerated into doing various Tricks With Body Parts while we waited for the waitress to bring our bill. Like, you know, rolling our tongues and seeing who was double jointed.

I lost the will to live again.

Finally, I stood up to go into the back and find our waitress when she happened to pass out table and I shrieked out, "EXCUSE ME, CAN WE PLEASE GET OUR BILL?" Judging by the way the woman was looking at me, I guess that perhaps I had been more forceful than I thought. "I guess I sounded pretty cranky," I said to Sherry.

She, in her direct way, said, "You sounded hysterical."

So I had THAT going for me.

We paid and went on our way and on the way home, I kept trying to make some sense of the day's happenings. You know, in my beat-everything-to-death-when-maybe-it's-not-really-a-conspiracy-to-send-me-to-an-institution-nor-is-it-a-sign-of-the-impending-Apocalypse kind of way? I swear, it's a disease with me, this need to look for larger meaning when there probably is none.

Ana listened to me thoughtfully. "Today was a bad restaurant day," she said.

Yeah, it could just be that.

Quick note that the Relish My Relish Giveaway is still open until Friday night at midnight. I am touched by how many of you weighed in with your stories of how your found my blog, but really not wanting any tomato relish. Y'all humble me and make me laugh, too. I'd love to take you all out to eat but...um...well...I might need some sort of Karmic Restaurant Adjustment before THAT happens.
Email Post
Labels: Ana Back to School Not enough therapy in the WORLD OCD? Not me. Oh the DRAMA parenting perspective Relish My Relish Giveaway wine

Unknown said…
OMG, I hear you. He's mellowed out lately, but my hubby used to have bad restaurant karma. If we ever wanted a free meal all we had to do was pick the newest one or the busiest one cause we'd be guaranteed awful service or cold food or rude staff.

Susan said…
I tend to embarrass my children and let my displeasure be known (especially to the profane) - but I liked the sign!
September 2, 2009 at 7:21 PM

Friendly's is such an Northeastern institution...no matter how bad the service is, I always go back - because it's Friendly's.
September 3, 2009 at 12:05 AM

MadMad said…
I think that sign thing is brilliant! And that some days totally stink (I'm telling you now, though, that most of those will involve middle school. Or middle school girls, at least!)
September 3, 2009 at 6:45 AM

ToyLady said…
Your Ana is wise beyond her years. Wouldn't it be nice to be able to shrug stuff off that easily?

Miri said…
When I have a day like that I tend to go all catatonic and fantasize about days on end of hermit-like homebodiness.

joannamauselina said…
That is how my day was yesterday too. I went shopping at Value Village thrift store and couldn't find one thing I needed. I got some Halloween socks for my granddaughter and was so undone that I left them in the shopping bag and forgot to buy them. At the grocery store,I forgot tea -the most important purchase. Desperately tired - tired to take a nap and even that failed. I think something cosmic was going on.
September 3, 2009 at 12:22 PM

Sherry Sea from Austin said…
Egads, did I say you sounded hysterical to an objective listener? I certainly didn't mean that (you have my many hearty apologies). I meant that you can bet the waitress would be telling herself that, "there's this crazy woman out there screaming at me. I can't be my fault the table is neglected." I'm glad you spoke up, because I was entering Carb Coma and needed to get home.
September 7, 2009 at 8:29 AM