So, we returned from vacation last night and found that the pets had run amok in our absence. Well, specifically Sir Edward the Orange Kitty (who showed his displeasure with my absence by peeing on my side of the bed) and Austin, who responded to the boredom of our empty house by eating holes in two of our rugs and gnawing on a chair. All in one night, after which our beloved pet sitter crated him when unsupervised. Which, of course, made her feel badly for him so she came over twice as often and took him and Scout on walks three times a day. 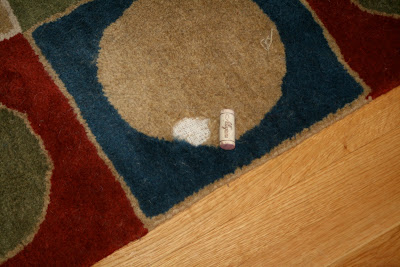 Shown with a cork for my usual scale. 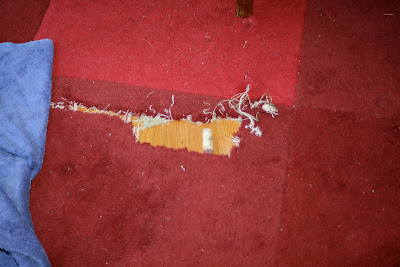 The bed clean up was fairly easy, thanks to my new steam front loader, although the down comforter suffered a bit. (Sparing you the pictures because, well, eeewww.)

I managed to turn the large rug around so that the small hole was under the red couch (which, incidentally, seems to have been party central for one black puppy who is NOT supposed to get on the furniture, ahem.) 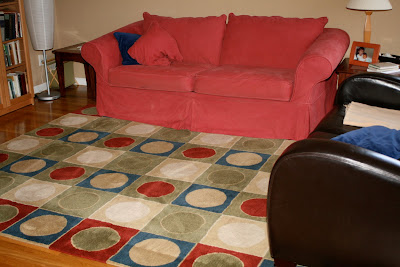 But the round rug under our kitchen table is a total loss.

I can't afford to buy a new rug right now because, hello, we just got back from Walt Disney World. (At one point, there was a guy ahead of me in line at the bar who looked at his bill and said, "Mickey Mouse should wear a kerchief and carry a gun and say, 'Stick 'em up!' on the signs.") 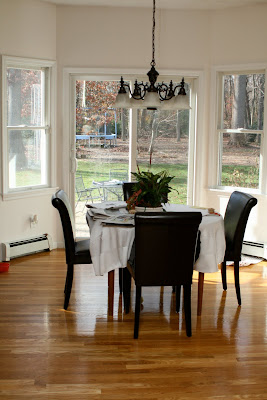 Looks a little sterile to me without the rug.

But I guess there's no point in replacing the rug when we still have this guy and he's only just ten months old. 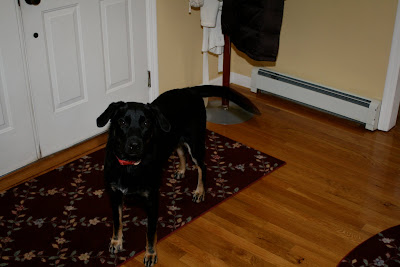 SO getting neutered next week! 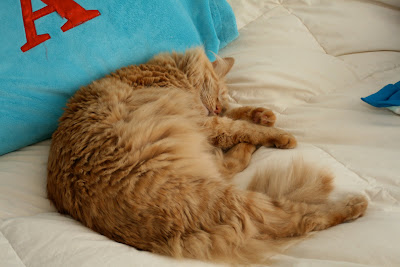 Edward sleeping oh-so-innocently on ANA'S bed. (SO going to a kennel next time we go out of town!)

Y'all, I think the lawyers have won.

Here is my snack on the plane coming home from Disney World. 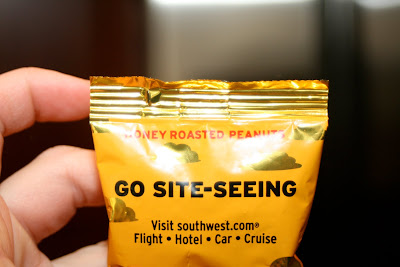 It's a small package of peanuts.

Here is what the packaging says: 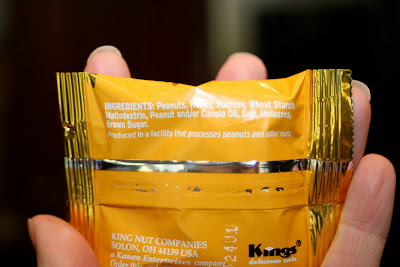 Yes, this package of PEANUTS was apparently packed in a facility that processes PEANUTS AND OTHER NUTS.

I dunno. Should we be reassured or frightened that they had to announce this?
Email Post
Labels: A picture is Worth at Least Ten Words Austin cats Doesn't everyone? Edward humor? Life in the Modren World Maybe I Should Just Shut Up perspective pets what makes a life WHAT? wine

joannamauselina said…
That's funny about the peanuts! My little Leslie was a terrible eater of carpets, etc, but his operation seemed to help. My kitty Farney did the same thing to my pillow as Edward did to your bed. He too started staying with the vet when I was away. I think he liked it better. He was actually glad to see me when I picked him up, instead of bitter and resentful as he had been when I arrived home after leaving him home alone.
November 16, 2009 at 6:02 PM

Anonymous said…
Just one of those reasons we don't have any pets. They sure get upset when you leave them alone. Makes you wonder if it's either 1) worth going out of town, or 2) worth having pets.
November 16, 2009 at 6:21 PM

knittergran said…
I'm so sorry about the carpets-my cat has done a number on an oriental carpet that I love...
:-(
I keep saying I'll get it repaired when the cat is no longer with us -how long do they live???
November 16, 2009 at 6:30 PM

Sorry about the bored and lonely pets. I'll bet they're all happy to see you. (Edward can't sleep on your side of the bed - he peed there (some say to show you how to get home again. But that really defeats the purpose of living in a clean space. But I guess it shows you his priorities).)

We have tossed out 2 rugs due to repeated potty use anf have another that should go. No chewing of them, though. Makes me re-think adding a puppy to the household.
November 16, 2009 at 10:27 PM

Mrs.Q said…
I once bought a bag of cashews that carried the warning label "may contain nuts". Well, duh! I hope so!

We got rid of the dining room carpet, too, after one too many "accidents." I could not STAND it anymore.

Unfortunately, that's messed up the puppster's frolicking area, so when he dashes to the end of living room carpet, he has stop short, since he'll slide across the dining room if he's not careful.

It's actually really funny to toss a tennis ball and watch him slam on the brakes.

Ann in NJ said…
My husband (who grew up in Daytona Beach, so has visited Disney often) has always said that Disney's motto should be "Bring Money." Even 20 years ago that was the case.

Anonymous said…
Wow, I can't believe you got peanuts. Much better than those tiny pretzels they hand out.

Austin looks so innocent and so does Edward.

kim said…
Thank you so much! Now I know that it's not just MY house that ends up looking like this. I have still not put down the area rugs after five months.
November 19, 2009 at 8:01 PM