(In which I talk a lot about knitting so you can just skip right over this blog post if knitting isn't your thing.) (Although, really, even you will have to admit that it's been a long time since I talked about it.)

(I also use a lot of parenthetical phrases.)

So, I believe I have written before about how I am a creature of extremes.  I'm sort of an all-or-nothing kind of girl.  Moderation doesn't work very well for me and I find that I don't even respond all that well to it. Like, my hair is turning gray and I would really like for it to be done with it already.  Enough of this wishy-washy, in-between state.  I've thought about dyeing it gray just to get it over with.  (But then I though about having brown roots and that seemed...well...stupid.)

Last May, our friends Mike and Sherry introduced me to a game called Scramble. I took to it like the obsessive compulsive person you all have come to know and love.  (I know you love me.  Deny it if you want to but why else would you still be here?) Seriously, I played it All. The. Time.  While waiting, while in the bathtub, when I could have been doing other things --even things I LIKE to do.  Like knitting.

So, it occurred to me the other day that Scramble was really sort of...um...EVIL. As you know (or maybe you don't,) I am about to turn 45.  For some reason, 45 seems like the birthday where I should really have my act together.  I should be (mostly) grown up.  So I've been taking stock of the way I'm living my life and I have to admit, I'm not that happy with me.  Therefore, I stopped drinking and started a new diet and exercise effort. (I've been perfect on my diet  for nine days (except for one night) and I've lost...are you ready...TWO STINKING POUNDS.  And even THAT will not deter me because failure is not an option.  I'm just going to keep doing it.  Every day for the rest of my stupid life.) (Which suddenly seems a lot shorter now that I'm about to turn 45.)

I also started looking at how I spend my time. I was kind of struck by the fact that I was playing this dumb game on my PHONE when I could have been WRITING or KNITTING, which are things I really enjoy and have, you know, an end product. We obsessive compulsives like to be productive. (Productive Obsessive Compulsive Disorder.)

Naturally, this made me send an  e-mail my friend Tiffany, to whom I expose all of my startling revelations, and she, despite the fact that she has a job and everything, usually weighs in with something wise and/or pithy.  She said, "I actually read an article about this within the past couple of weeks.  Apparently, people in general are just as likely to procrastinate things they want to do as they are to procrastinate tasks."

(See, now people are writing articles about me.  I told you people love me!) (Productive Obsessive Compulsive Narcissistic Disorder.)

Anyway, because I don't do well at cutting down on things, I deleted Scramble from my phone. Just cold turkey.  Like THAT.  (If I'm not happy with the way I'm living my life, I will delete a video game from my phone!  Dudes, my strength knows no bounds.)

Sure enough, suddenly, I was knitting and knitting and knitting.  It was so fun!  I remembered why I love it --I love doing something with my hands and ending up with something gorgeous at the end.  Unfortunately, thus began the worst string of Knitting Karma I have ever had.  I'm knitting socks for Tiffany.  I ordered the yarn for them back in October but never really did much with it.  (Productive Obsessive Compulsive Narcissistic Procrastination Disorder.)

(Tiff is not sure if she's going to LIKE hand-knitted socks. No, stop laughing, she's serious.  She thinks they will be too bulky in her shoes.  I am totally going to change her mind. Doesn't she know that some of us actually BUY SHOES to accommodate our hand-knitted socks?) (Productive Obsessive Compulsive Narcissistic Procrastination Shopaholic Disorder.)

So, FIRST I had to rip back the first socks I was knitting three separate times.  I put that yarn into a time out (after a mental process where I  sincerely considered cutting it into very small pieces and then setting it afire) and began a second pair. Only, it took me four different tries just to wind it into balls. Then I started knitting and I turned the heel (Oh, the cleverness of me!) only to bow to that nagging voice in my head that said the sock was way too big.  (Okay, I bowed to my own inner voice after my friend Sherry said (and I'm paraphrasing here,) "Hey, that sock is freaking enormous.")

So, at this point, I had been knitting about a million hours and I still have no pairs of socks to show.  Except, well, through dogged...um...doggedness, I have reknitted Tiffany's first sock and it now looks like this: 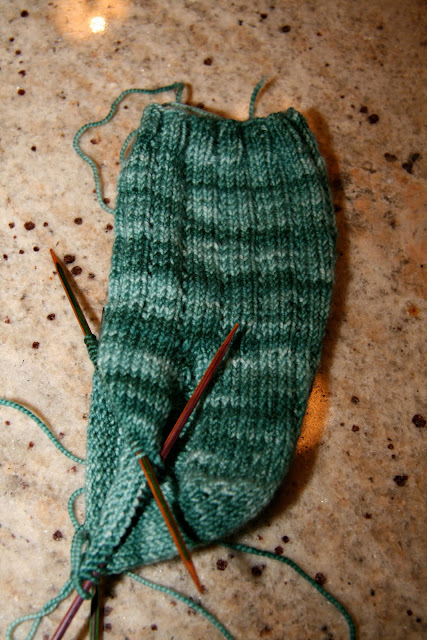 Claudia Hand-painted yarn (FINGERING weight because oh, how I love my Tiffany) in Country Kitchen.  Thuja sock pattern.
And then I took the sock with me on Wednesday when my older daughter Ana and I went for our guitar lessons.  I prepared for my lesson by shutting my hand in the car door in the parking lot, which, (sorry, Ana) led me to say something NOT BLOG WORTHY and jump up and down.  Because, dang, it HURT.  And then I was sitting there, knitting away on Tiff's sock, when this woman came and sat down and eyed me.  "So, what are you making?  Is it a sweater?"
I was grateful to see a smiling, friendly face.
"No, actually, it's a sock," I replied.
This woman threw her head back and laughed and laughed.

It was irritating as hell.
"Really?  A sock?" She seemed amazed that I was serious.
And then she looked down at my feet.  "And did you knit THOSE socks, too." (I was wearing a pair of my hand-knitted socks in my CLOGS that I bought to wear just to show my socks off.) (Productive Obsessive Compulsive Narcissistic Procrastination Shopaholic Exhibitionist  Disorder.)
"Yes, I did!"
The woman now looked somewhat alarmed.
"So, you knit socks.  Huh," she said.
Just then the door opened and my guitar teacher came out to tell me it was time for my lesson.  I was sort of desperate to convince this scoffing woman that socks were a worthy endeavor and I opened my mouth and said, "Well, you see, socks are so portafull."
Yes, I really did say that.
The woman made kind of a mad dash for the door.
"I mean PORTABLE.  Portable!  Socks are portable," I said to her back.
I don't know.  Maybe I should go back to playing Scramble, at least in public. (Productive Obsessive Compulsive Narcissistic Procrastination Shopaholic Exhibitionist  COWARDICE Disorder.)
Email Post
Labels: Bum Reduction Project Freaking Fat Genes humor knitting Not enough therapy in the WORLD socks WHAT? Doesn't everyone?

Kathy Ireland said…
I don't like that woman. She laughed at your craft! Hope the door hit her on the "Not Blog Worthy part of her anatomy" on her her mad dash out the door.
January 29, 2010 at 11:08 AM

Much empathy on the losing weight thing. Dieting stinks.

Want another productive obsession? I've converted to Berlin Woolwork. It's a really vibrant type of needlepoint, almost like painting in wool. The softest, most lovely (415 different colors!) wool.

Unknown said…
what a twit! I missed the hilarity! Oh dear, I have been there too. Thanks for the laugh.
I sat in a surgery knitting socks and two girls, who thought I was deaf I guess, were discussing my knitting, wondering what I could be knitting. One said 'a willy warmer' and giggled. As I was called to the Doctor, I struggled up onto my feet, leaned forward and said , loudly, 'if you think this is a willy warmer you have either been spoiled or are in for a disappointment.'.
January 29, 2010 at 12:48 PM

joannamauselina said…
The sock is cute and the woman is a goofball. My aunt was shocked once because I was knitting a pair of socks and had to start over about five times. She just couldn't understand why one would do this. She seemed to feel that it would be better to spend ten hour on something unsatisfactory than waste the one hour getting it right. People are odd.
January 29, 2010 at 1:16 PM

And love the laughing woman because she gave us all the chance to come together and get all "knitters unite" with each other!
January 29, 2010 at 2:22 PM

Diane Perin said…
Oh dear, I recognize much of myself in your disorders -- I mean, characteristics. I've just cut myself off of the Facebook Farmville thing (but I do find myself worrying about my farm animals, waiting there with no one to milk them and pet them and all...) But go with the knitting. That nasty woman was just jealous of your portafull hobby.
January 29, 2010 at 3:19 PM

Ann in NJ said…
She is a Heathen, and unworthy of hand knit socks, obviously.

Everytime I knit socks in public, because they are so portafull, after all, people are awed and amazed. Perhaps I just live among the easily impressed. Or I'm scary, one or the other.
January 29, 2010 at 8:02 PM

Sherry Sea from Austin said…
Terrific post, Barb. Loathsome woman who laughed at your socks probably doesn't even recycle her trash.
January 30, 2010 at 11:09 AM

Bullwinkle said…
You know, I knit in public - all the time - and friends ask (all the time), "what's this?" And the answer never (ever) varies. "It's socks. Because if I'm standing in line at Pot Belly's and I pulled it out of my purse, its a sock." I'm starting to hate socks because I want to knit something else. (But I tell myself that is because I need to spend more time at home, not out. It really has nothing to do with socks if I just had more time to knit. At. Home.)

But never has anyone laughed at me incredulously (uh, sp??) Ever.

ToyLady said…
Well, I don't know. I think your socks probably are very "portafull" - they're FULL of PORTABILITY. (Aren't they?)

Seriously - I pieced and hand-quilted an entire lap quilt one Little League season.

Mean lady just wishes she had some skill besides SNARKINESS. (Which it sounds like she's not even very good at.)
February 1, 2010 at 9:12 AM

Debby said…
Portafull. New word... something which is both portable and beautiful. Or, if that doesn't work next time you run into a similar person, just go with the all purpose: F-You. Pithy but powerful.
Oh, and hey, about the weight loss, I'd consider 2 pounds a huge victory. I dieted w/ a friend last year. We did South Beach. She lost 5 lbs. in four weeks and she cheated. I followed the program religiously and lost nothing. I would have paid big money for 2 pounds!
Thanks for blogging. You're fun to read.
February 3, 2010 at 3:30 PM

Miri said…
I am so late to this party. But I must say: What was *wrong* with that woman? Also, once I told a nurse that I wasn't a bigamist. Honestly. I can't even remember what word I meant. AND I didn't correct myself in time for her rapidly departing self to hear.
February 4, 2010 at 10:55 AM