(But I DO use the word stupid 14 times in less than 450 words, which is something of an accomplishment.)

Okay, so I have this terrible, energy-sucking, stupid cold and it's snowing and my husband is out of town and my Christmas decorations are still 80% up, including the stupid tree and we're drowning in dust and laundry...

...seems like a good time to do a Stupid Product Review.

I'm not going to let the fact that I never review products get in the way of warning you all about this stupid, stupid product.  (Yes, that I bought.  I'm putting it down to temporary stupidity caused by cold medicine.  You wanna make something of that?) (DO YOU?) 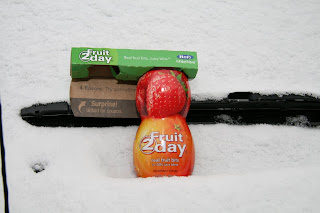 See that?  That product is the most ridiculous product I have ever wasted $3.49 on --and people, that is saying something. I was looking for a little shot of vitamin C, given that I could hear my head SLOSHING as I walked (stupid cold) and there this product was--just when I had about lost the will to live right there in the dairy aisle of a large grocery store. (It comes packaged in two-bottle packages but I'd already consumed one before I took this picture. I would ordinarily not have bought the stupid product because of the excess packaging, (even though the bottles can be recycled) but dudes, I needed a little juice. More about the stupid packaging in a minute.)

It beckoned to me with its bright colors.

I took it home and opened the first bottle. I started drinking and immediately choked on a large-ish chunk of fruit.

I'd been warned that there were bits of fruit in the juice (it says so right on the stupid bottle) but it never occurred to me that these bits would be so large that you'd have to chew them. I think I was envisioning pulp like you get in good orange juice but these were more like, "HOLY COW! There's a bit of pineapple stuck in my esophagus!"

(And as an aside (of course) why was there even pineapple IN the bottle marked "strawberry orange?"  I mean, I LIKE pineapple but not everyone does, you know.)

So, okay, I could maybe deal with the chunks of fruit. I resumed drinking chewing the juice but the rim around the stupid bottle is so sharp that it cut my lips when I slowed down in order not to accidentally inhale some piece of pineapple that may or may not have belonged in the bottle.

And you know what happens to tiny cuts when juice gets inside?

Email Post
Labels: Grocery Store Hell humor Maybe I Should Just Shut Up My Life is so STUPID Not enough therapy in the WORLD sick WHAT? WHAT? Doesn't everyone? Winter Wonderland

joannamauselina said…
That is a sad story! I often end up feeling stupid after I have wasted money on a stupid product I neither want nor need. And I don't even take cold medicine other than aspirins, because they make me crazy.
January 8, 2010 at 12:20 PM

ToyLady said…
Oh, dear. My husband and I saw that the other day.

We were both appalled.

"So it's juice? Chunky juice?"

Unknown said…
I saw that advertised on TV and thought it looked stupid. drink juice or eat fruit, but who wants to do both at once??? stupid juice.
January 8, 2010 at 1:07 PM

LaDonna said…
OK, I don't normally do product reviews either, but since you're looking for a good source of vitamin C....

I've recently become totally addicted to Emergen-C drink powder. It comes in about 4 different flavors (I like the Acai Berry) and each packet has 1000 MG of vitamin C as well as other vitamins, antioxidents, etc. It's great for when you're sick or when you feel like you're getting sick. I brought a whole box with me to Seattle now because I always get sick when I'm traveling. It's about $9 for 30 packets at Target and you'll find it in the vitamin aisle. Great stuff!
January 8, 2010 at 2:50 PM

DK said…
Bleh!! I fell victim to this ridiculous product as well. I was expecting a smoothie. Honestly? It kind of reminded me of chunky fruit vomit.

Anonymous said…
ew nasty, and ouch! honestly that really would have kinda ticked me off. I tend to get a tad pissy when im sick, that would have only added to it, especially after cutting my lip and juice then burning it. Thanks for the warning! lol
January 8, 2010 at 11:14 PM

When you think so little of something stupid as to not have enough time for the whole word.