The Scariest Thing I have Ever Done

So, today I am announcing that I am about to embark on the scariest thing I have ever done.

It's 8:00 in the morning and I have just finished a bagel with tuna salad.

It is, actually. For me, at least. And not just because it's eating fish for breakfast. It's because it was exactly what I wanted.

Friends? That's a huge honkin' metaphor for my life.

It occurred to me recently that I have gotten to this point in my life where food is something I have to do to sustain life and function, but I would be perfectly happy if someone would just hand me a smoothie and I didn't have to think about it. While I cook to my family's specifications, I rarely sit down to eat with them and it is rarely exactly what *I* want to eat. I just go along, rather than listening to the faint desires of my own body. Those desires grow quieter and quieter, actually. I am numb to hunger--I simply don't feel it.

How many other desires in my life have I ignored for so long that they no longer even figure on my radar?

I have been thinking a lot about this lately. First of all, I'm reading a book by Geneen Roth called Women Food and God. (Yes, it bothers me that the comma is missing. I'm dealing with it.) I'm not finished with it because the concepts in it seem bigger than my capacity to understand them. I keep having to read and then try to internalize the idea and then reread. I can't gulp this book --I have to savor every bite.

Which may be the point. Or one of the points.

Geneen Roth wrote books that were instrumental in ending the practice of my eating disorder so I was prepared for this book to be meaningful. I wasn't prepared for it to change my life, though.

It wasn't just the book. We took a trip back home to Texas and I realized at one point that I was really nervous about seeing my family and friends because I've gained so much weight since I last saw them. I was assuming that their judgment of my weight would be more important than their love for me. Y'all, that's just crazy on legs right there. And oh, how they showed me one hundred times over how much they love me! It still leaves me almost breathless with gratitude and surprise and joy.

Then, also in Texas, my mom and I stole a morning and went clothes shopping. Lately, when I need clothes, I tend to buy them without even trying them on. (Hmm, kind of like drinking a smoothie so I don't have to think about food?) I bought some clothes--ridiculously expensive clothes --that I tried on and LOVED. I felt really, really guilty about it, even though everyone around me told me I was worth it, including my husband, who was footing the bill.

Then my foot started acting up again. I'm going for another MRI next week to see if I have a stress fracture. "But Barb?" said the doctor. "Your foot is really messed up. This just might be how it is."

So, here's the thing: I am forty-five years old and I have spent at least 30 years of that lifetime at war with myself and my body and my desires. I have spent 30 years as the harshest judge imaginable of the person I am, the thoughts that I have, the way I live, the way I look, the use or squandering of my talents, the way I express myself. I, who try never to apply those kinds of judgments to others (except to this one person in my life who I am just positive is only in my life so I can call myself a hypocrite in addition to everything else,) am the unkindest person I know to me.

I'm so unkind to myself that it would be labeled abusive by any mental health professional out there.

I always tell my children, "who you are is enough. Strive to do great things, yes, but who you ARE is enough-- you are a gift to this world." 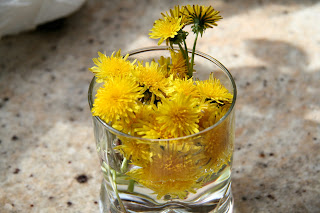 Yesterday, Jane (9) came inside and presented me with a bouquet of dandelions. She picked them because she saw them and she thought they were pretty and she wanted to give them to me. She didn't judge them for being weeds and unworthy of being a gift. She gave them in the way that children give instinctively.

So here's my scary announcement: I'm done with dieting and judging every mouthful I eat. I know it doesn't sound very scary but it's not only scary to leave behind the judgments of the world about the food I eat, it's very hard to listen for that voice that tells me what it is I really want. I'm done with dieting, yes, but I'm also done with being an afterthought. I'm never again going to grab a handful of dry cereal out of a box as I run out the door. I hope to never again eat MINDLESSLY.

I'm beginning to nurture myself one bite at a time, based on my true desires and hunger. I am suspending judgment while I am listening for a change.
Email Post
Labels: dinner discipline Everywhere Are Signs good friends gratitude growing up Jane joy Joy Rush love parenting perspective putting down roots small things Sunshine

Rhonda from Baddeck said…
Barb,
What a wonderful plan! I wish we all had the ability to see this in ourselves, the courage to face it and the strength to overcome it. I'm sending good thoughts that you'll be able to keep this 'mindful' practice going when things try to fall in the same old pattern. Making a change is always hard, but YOU"RE WORTH IT!
April 23, 2010 at 7:00 PM

Miri said…
I think the word I'm looking for is "verklempt." Someone can feel free to correct me if I'm wrong with this... your post has me close to tears.

Suburban Correspondent said…
Wow. I'm interested in checking out this woman's books. She left out 2 commas, though. Which (for some reason) makes it more excusable - if only one were missing, it would be a mistake. But leaving both out? That's some sort of statement.
April 23, 2010 at 8:55 PM

Kris said…
Your post reminded me of this quote:

Susan said…
Oh Barb, I am so happy for you. I believe that this is the book that Oprah has taken to heart, too. I have trouble with the whole God part and I am pretty aware of my food issues (not so hard on myself as you are - 'tho much bigger!) I hope this is the key for you!
April 24, 2010 at 1:08 AM

Lynn said…
I have several of Geneen Roth's books on the same shelf with my culinary mysteries, my cookbooks, and my MFK Fisher memoirs. Might be time to revisit them. I signed up at the health club today, not for anybody else, not to be skinny, just to be loving to myself.

Good for you. Truly, truly *good* for you. One of the things I like about being single, is I can eat what I please, when I please, if I please. And sometimes it's a PBJ at midnight, or hummus with a Granny Smith apple for a snack, or just a big glass of water.

kim said…
I love this post. And, for me, it comes at a time when I most needed to read it. It's so funny because when I met you, you exuded such warmth and kindness that the anxiety I was feeling that day about not "measuring up" just melted away. I suppose we all need to be kinder to ourselves.

Mokihana said…
Wow, Barb. What a fabulous post! It's very thoughtful and hits me square in the middle of where I am right now. I have some friends on specific diets; they start out by telling me that the first few days are horrible. Why would I want to go through a week of horrible?

I love your "mindful" eating idea. Thank you so much!

Suna Kendall said…
Great post and great plan. So many women have felt just like you. And you have had a very appropriate, healthy reaction. Yay!
April 24, 2010 at 4:43 PM

Annabanana said…
Yay you! You are also the 2nd person in 24 hours to mention this book to me - I AM LISTENING GOD, I shall head over to B&N now, and maybe stop by Whole Foods for a chair massage and whatever my little heart desires. WE ARE WORTH IT!!! GO BARB!
April 24, 2010 at 4:46 PM

Moira said…
I've also read many of Roth's books, and have been moved, inspired and changed by each one in turn. And yet, I've had some resistance to reading this newest one.

But that bit about you were prepared for it be meaningful, but not life-changing caught my attention.
April 24, 2010 at 6:02 PM

I'm with you on this.

Liz Garton Scanlon said…
Barb... Just a note to say thank YOU for your loving note on my blog. We are hanging in there -- shock's worn off and my sweet husband's ready to kick this blasted cancer to the curb.

In the meantime, all my love and support and admiration for you. Way to love yourself up...

Karen said…
It is only recently that I have started doing things for myself and declaring myself worthy of expensive clothes, or a fancy dinner, or whatever it is that I really want. We all need to stand up for oursleves and treat ourselves well. I am so happy to see you doing this, and I hope it works out wonderfully for you.

But the best part about your post...is that it is almost summer, and summer means fresh tomatoes! Which means you can eat as many fresh tomato sanwiches as you want, whenever you want.

Unknown said…
I hope this doesn't upset your southern sensibilities, But FUCK YEAH!!!!!!!!!!

I recently made that decision too, and today, I grabbed salad for lunch instead of something "bad" for me, because it's what I wanted. Funny how that works.
April 27, 2010 at 5:57 PM

Karen said…
Such a simple idea. Although how many of us really go about do what we want, instead of doing what others want us to do. Great Post!
May 1, 2010 at 12:18 AM