Take Our Pets --No, Really

We have four pets. 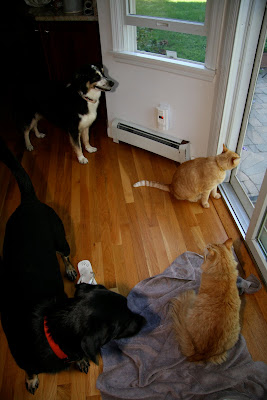 And now, a pictorial of how I spent every spare moment of daylight this summer: 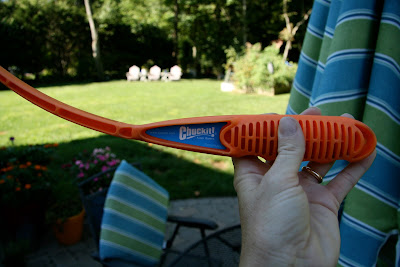 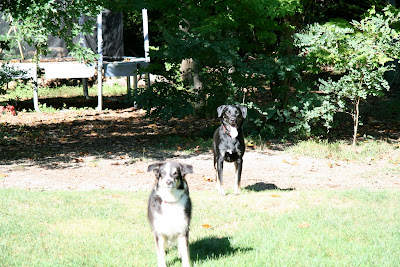 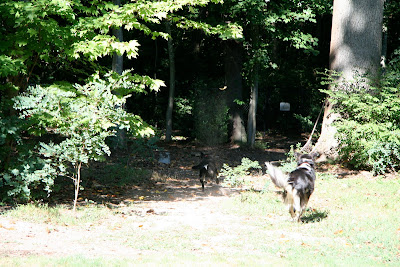 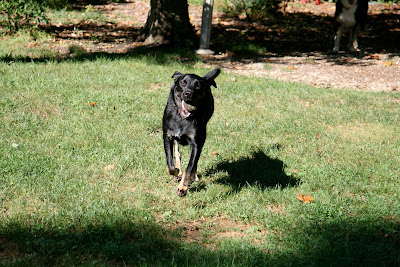 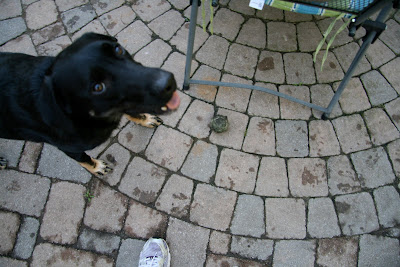 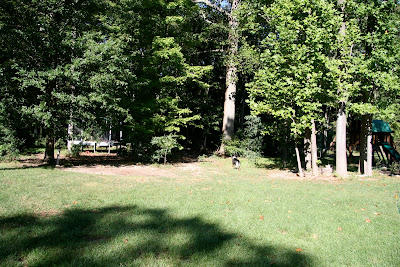 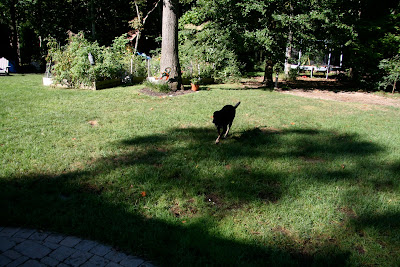 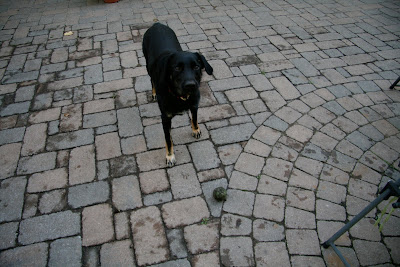 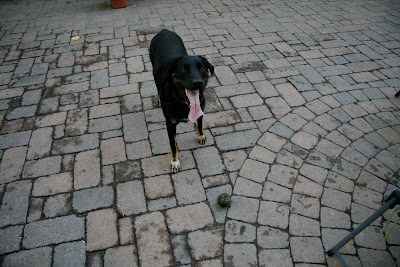 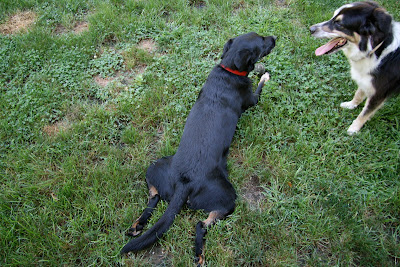 and won't bring the ball back anymore. I do this at least three times a day. (My right arm looks like Babe Ruth's at this point.)

If I DON'T do this, the puppy becomes the whiniest, paw-iest, most annoying animal on this planet.

Unless, of course, you've met my cat Thomas. 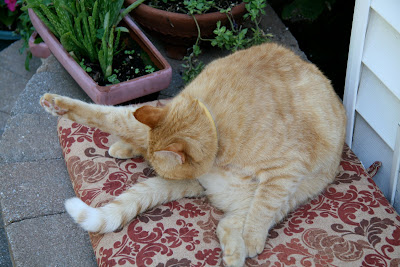 (Shown here in the pose I call Frat Boy 101.)
Coop and I are completely exhausted and it's because we haven't had a night of unbroken, uninterrupted sleep since May. Our dang cats have started in with either a) kitty aerobics or b) the most annoying and LOUD meowing/yowling or c) some combination of fighting and/or fur ball expulsion every single freaking morning at 5 AM.  If not 3 AM.

Every morning one of us gets up and throws the cats in the garage but we can never go back to sleep. It's been the longest summer of my LIFE, especially when you add in the fact that we can't let the cats out before 9AM because if we DO, they invariably come back with some small animal.  In Edward's case, it's usually alive.  (Coop says that Edward really wants his own pet.) 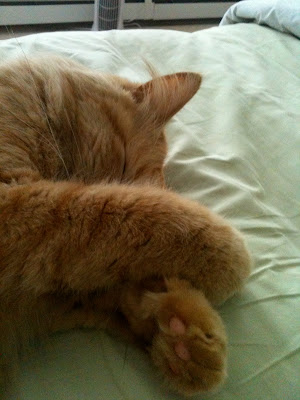 (Edward, after the entire house has been woken up, in what I like to call his "$%&#(@ Cat!" pose.)
In Thomas's case, it might just be a tiny bunny--the most innocent and defenseless of all creatures. Thomas is clearly well-fed.  He's fat and slothful and spends most of the year working on the 24-hour nap.  But in the summer, he turns into... this Vicious Bunny Murderer.  And he's FAST.  No, really, I've seen him run and while it's not a visual I recommend, he IS fast.  There's no denying it. 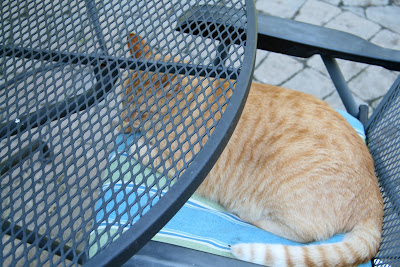 (Be vewy quiet.  He's hunting wabbits.)
We have put collars on the cats with bells on them but all this seems to do is wake us up even more often to the sound of eight tiny reindeer throwing up fur balls on the hall carpet.  Which makes the dogs bark.

So, the sound track of the night goes something like this:

Jingle
Rowr
Thump (cat jumping on bed)
Hiss
Jingle
Rowr
Thump (cat knocking glasses off on floor)
Hiss
MEOW
WOOF
Jingle
HISS
Rowr
WOOF
MEEEOW
"OH, FOR PETE'S FREAKING SAKE!" (or, you know, some variation of that.) (Ahem.)
On the other hand, all this time I've spent up at night has had its positive side:  I'm knitting a blanket. 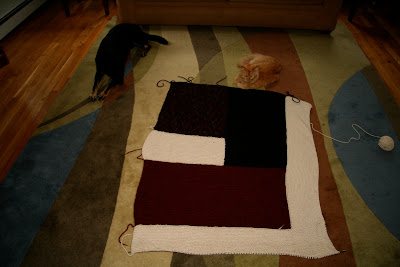 Well, I WAS knitting a blanket, until about an hour ago when it became evident that a rookie mistake made in the dead of the night on color block number two was going to require me to rip the whole thing back out. Right back down to the very first square.  Six weeks of knitting gone. 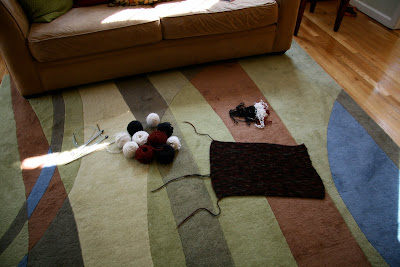 If y'all are looking for me, I'll be doing something less frustrating that has nothing to do with yarn or pets.

Like parenting, maybe.
Email Post
Labels: Am I Out of My Freaking Mind? cats Coop dogs humor I'm so DONE My Life is so STUPID pets sleeping Thomas

The Dister said…
I'm telling you - the best thing I EVER did (regarding our two fur balls) was turn them into indoor cats. It took about 1 1/2 weeks for them to turn it around. Heidi (calico coloured Edward) was the worst - bringing home dead animal pieces every night and howling at the top of her lungs at the front door for someone to please come and see what she had done!

Now, with the exception of occasionally trying to "capture" my feet under the covers, the cats are quiet all night. I know it's not a popular choice for alot of cat owners but I would recommend it for all cats.
August 31, 2010 at 11:10 AM

LaDonna said…
So this is totally not the level of empathy I really want to show you here, but I have to say that it makes me giggle. You still call Austin "the puppy". He's as big (or is he bigger, hard to tell from the angle) as Scout, but he's still "the puppy". Something strikes me as funny about that.

We've recently become multiple pet owners as well, although we only have two. But even at that, I can understand your frustration. We added the most adorable pug to our family (if you've seen my FB pics, you've already "met" Rufus). It took several weeks for Sasha (my 6 year old pom-bishon mix) to first, realize that he was NOT leaving, and then second, accept that this annoying little creature could actually be alot of fun.

Only now, Sasha has taken the whole thing to an extreme. The two of them run around the livingroom chasing, barking, and snarling at each other (all in play). The did this last night for FOUR HOURS! I would put them in the back yard, but our yard isn't fences. So, if anyone should stop by at just the wrong moment, it WILL sound like I'm running a dog fighting ring in my livingroom.
August 31, 2010 at 11:20 AM

Ann in NJ said…
We solved the night problem by forbidding the cats from our bedroom but we started when they were kittens. They would attack toes, and then about 4 am EVERY NIGHT they would chase each other around the room and across our bed. Not fun - so we closed the door. Works for us (but we have half as many animals as you do).
August 31, 2010 at 12:20 PM

knittergran said…
Wow-re: the knitting.
Can't you just call the mistake a "design element" and go from there? I've done that and it can work quite nicely!
August 31, 2010 at 12:47 PM

Barb Matijevich said…
I can't. I tried. I laboriously picked out one block and reknitted it correctly. But this is one of those projects where all of the blocks that come after the faulty block are now faulty and the blanket wouldn't square up. Stupid mistake. When I'm done pouting, I will try again.

Ladonna, I guess we will call him the puppy until he is toothless and on a walker. Even after he actually stops ACTING like a puppy...
August 31, 2010 at 1:01 PM

joannamauselina said…
Edward sure is cute! Sorry about the blanket! You were brave to not just abandon it.
August 31, 2010 at 1:25 PM

The Dister said…
Also, and what do I know, but I think that blanket was gorgeous! I would never have known there was a mistake in it! And look at Thomas, he is so patiently waiting to just pick out the best spot and curl up on it.
August 31, 2010 at 2:31 PM

ccr in MA said…
You had my sympathies with all the pet stuff (have you tried practicing the throw lefty? for balanced muscles?), but only at the knitting was I truly pained. Oh, ow. So sorry!
August 31, 2010 at 8:13 PM