Thank You and an Update

Again and again, I am reminded that the readers of this blog are the most compassionate and articulate and wonderful group of friends I have ever had.  Even when we disagree, the tone is always of mutual respect and kindness.  I consider you all among my greatest blessings. Thank you. You humble and uplift me.

I received a LOT of correspondence on my last blog post about Jane's school situation this new school year, both on the blog and in e-mail and every bit of it was so helpful. For one thing, I am conditioned to think that when I get really and truly angry, it is an out of proportion response.  Thank you for validating me.

For another, someone sent my blog to the Principal of Jane's school (she wouldn't say who, which is fine) on Tuesday and she immediately called both my husband and me and asked to meet with us. Initially, my heart sank and I felt...well, I felt like I'd been sent to the Principal's office! But then, you know, I remembered that I stood behind every word I had written.  That I had written the truth as I knew it and that it was my child's well-being at stake.

When we got there, the Principal had already called in the district psychologist and had spoken to the teacher.  I was not expecting her to be so proactive, nor was I expecting the level of concern and genuine regard for Jane's well-being.  I was impressed. I felt a lot better. I felt heard.

That being said, we are still exploring our options for Jane's school year.  We do feel that a change will have to be made but are discussing (ad nauseum) what form that change will take. We are actively looking at the array of private schools around us, as well as contemplating a teacher change. We think we will be able to make a decision by early next week. 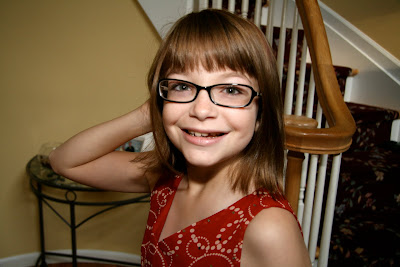 As for Jane, she is definitely not feeling stress at the moment.  (Y'all can just imagine how closely we are monitoring THAT situation, right?) She started trumpet lessons yesterday and today is picture day.

Just now, as I was making her bed, I spied her new song in progress: 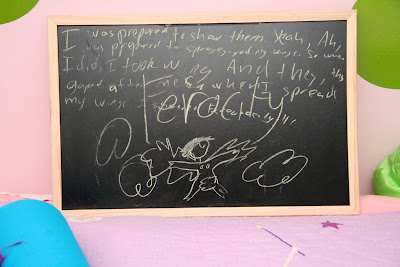 Gosh, I learn so much from that kid.
Email Post
Labels: Back to School Mama ain't happy The World According to Jane You Wanna Piece of Me??

Panhandle Jane said…
I am a retired public school teacher. In that position, it was my job to consider the well-being of all the students in the class as a whole as well as each individual student. HOWEVER, I am also a parent. As a parent, it was my job to advocate for what was best for MY child, period. The most heartbreaking thing for me was to sit in a conference with the parent and child and hear the parent do nothing but belittle the child. Of course, I'm still in Texas, so perhaps things are different elsewhere. Hang in there and get something done! Keep a yellow pad in front of you and document what is said and who says it to you.
September 23, 2010 at 1:16 PM

Kathy Ireland said…
Yay Jane and don't forget, everything that amazing kid (both amazing kids) has learned, she's learned from you and her awesome dad. The two of you are outstanding parents!
September 23, 2010 at 1:39 PM

TheOneTrueSue said…
I wanted to comment yesterday but had time-space continuum issues. (You know how it goes.)

Good for you. I tend to be very meek and apologetic when I approach a principle or teacher with my concerns, and I need to learn to stand up straight and strong. Good job mama bear. xoxo
September 23, 2010 at 2:06 PM

Ann in NJ said…
That's awesome. Both the song and you standing firm to the principal. I hope for you and Jane this is a corner turned, and however the situation is resolved is good.

Ontario-made said…
Way to teach your kids independence and to stand behind your actions! I love your blog so please keep it coming!
September 24, 2010 at 9:25 AM

Anonymous said…
Whoever sent that blog link to the school principle....genius!

kim said…
Can I just say that she is "FIERCE" in such a great way? And so pretty too. I think you have nothing to worry about. You are doing an amazing job.

jennyp said…
Love that song! You know, there are a lot of poetry writing contests that you can find on the web. I highly recommend submitting some of Jane's work. It would be a great confidence booster for her (you know she'd win!) I bet they'd even let her be known by only her first name. Cher, Madonna, Jane! (That would show the teacher!)
September 24, 2010 at 9:34 PM

Mrs.Q said…
Wow - I'd missed your last post, but now that I'm caught up, I just want to say: I would have been FURIOUS at that note! Heck, I AM cheesed. I'm so glad things are looking up. And Jane? A lot of fierceness in that wee, lovely package! (But you already know that your kids rock!)
September 26, 2010 at 10:53 PM

Anonymous said…
From one female trumpet player to another... go Jane!!! I got all excited and was going to recommend my former trumpet teacher, who lives in Huntington, but when I looked him up, he is probably in his 80's. Perhaps he is not teaching anymore. Am I really that old????

Wow, on the song!

Susan said…
Just got caught up on the last couple of posts - geez. You have had a rought September! So happy that steps are being taken with Jane's teacher. My stomach is in a knot just ready about it.

I am also happy that she seems to be moving throught it well - just proves that your parenting "mistakes" have not been so terrible!


And I am sorry that it had to be one of those mom's who called while you went out on a pick up run. I probably would have done the same thing and then beat myself up for weeks over the other mom's attitude, too. But I agree with the experts and the commenters that you have to make a judgement based on the kid and the circumstance.

Hope everything has a positive resolution - are you still trying to sell the house?
September 30, 2010 at 1:34 PM

Excellent song. Excellent parenting. (Way cool that I got happier ending by catching up all at once -- your last post had me sad for Jane.)
October 2, 2010 at 10:10 AM