(Still experimenting with the feed thing. Would you all hate it if you had to click to read the blog? Would you actually do it? Tell me honestly because I don't want to make things less convenient for you.  I'm trying to get some quantifiable numbers just in case I ever want to allow advertising or, um, get a book deal and need to prove my vast readership.)

There has been a flurry of activity at the Cooper Clubhouse lately because I am all about the holidays this year.  ESPECIALLY Thanksgiving, which I love with a passion anyway.

So, first I had some old business to attend to: 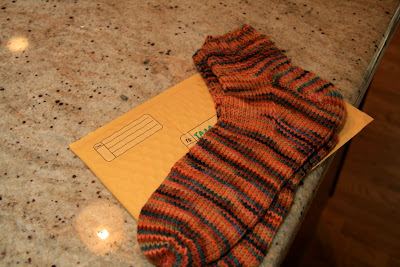 I finished Tara's socks and sent them off to her.  I am particularly proud of them because A) did NOT run out of yarn (for, like, the first time EVER) and B) it's good knitting.  There's a feeling when you know the knitting doesn't contain any...well... creative fixes. I guess maybe that feeling is pride.  They're good solid socks, knit with love and good craftsmanship.  I'm proud of them and I hope Tara will feel the love when she wears them.
Next, I have been dialing in my Thanksgiving recipes.  I've been baking bread like a MAD WOMAN because, y'all, I just discovered that you can make dough in your bread maker and then bake it yourself and it will look like bread you totally threw your shoulder out kneading but your shoulder will actually be intact.  The other thing I've discovered is that most people, regardless of their political or socio-economic status, or their stance on the new TSA regulations (my stance would be appalled), LOVE BREAD.  (Except for those who cannot eat wheat and/or gluten and to them I mean no offense.) (And I'm sorry I can't share my bread with you.) I've been giving it away like crazy because I am trying to avoid the pre-Thanksgiving roll. (Get it?? Get it??)  (Oh, hush.) Anyway, I've given it to my yoga instructor and to Jane's drum teacher and we've eaten a good deal of it and I think I've finally dialed the recipe in.  Tomorrow I am going to make some and try putting a pan with an inch of water in it in the bottom of the oven to help "steam" the bread and hopefully create a nice crispy crust. 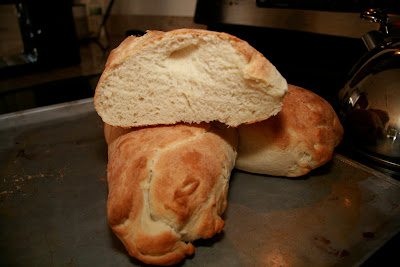 This is the first couple of loaves.  The others didn't last long enough for pictures.
Yesterday, we had the house cleaners for the first time in several months. I so love the cleaners. I love them and I would like to make them many loaves of bread.  I love them so much that I usually feel the need to clean the entire house before they come in hopes that they will come to my house and spend all of their time doing things like applying courtesy stripes and toilet paper points.  (Also? Scrubbing the toilets and dusting, because I really loathe those jobs.)
We haven't been having the cleaners come lately in a general belt-tightening effort, but we are having an open house today (did I mention our house is STILL on the market? Yes, it is.  Although sometimes we go for whole months without noticing that fact because there is so little activity in the housing market and no one is coming to see our house.  We have had a few offers but they've been nowhere near what we paid for the place and since we're not in a big hurry, we are waiting for the market to come back up.  (Oh, please, FSM, let it come back up!) On my good days, I think that this is just inevitable and on my bad days I think that I will grow old and die here.
After the Open House today, on Monday, my PARENTS ARE COMING FOR THANKSGIVING! I am very excited about this, despite the fact that I feel terribly guilty that they will be undergoing the TSA's new invasive (and almost certainly unconstitutional) search methods.  My mother doesn't seem very concerned.  Since she's got two artificial hips and a fake knee (my brother hopes she'll leave her spare parts to him when she's gone--he wants to build a go-cart), she's used to getting felt up by strangers.  I dunno, if a woman will go through those kinds of excruciating joint-replacement surgeries, is she really going to say "Oh, what the heck?" and carry explosives to blow up an airplane? But there is no arguing with an agency in full-on panic and retreat mode.  (Guess what, guys? You keep that stuff up and it will be hard to tell who exactly the terrorists are. Just sayin'.)
Okay then, I have some bread to bake.  And a house to sell.  And then, I will tell you how yoga is changing my entire life and how much I love it and how I miss it when I can't go... and you will wonder who the heck is writing my blog these days.
Email Post
Labels: Am I Out of My Freaking Mind? House for Sale house guests Joy Rush knitting My Personal Fairy Tale socks what makes a life yarn

Joni said…
I'm no longer getting updates in my RSS feed for your blog. Thought you would want to know -- I saw on Facebook that you had updated. Honestly, from everything I've read, if your house isn't selling, take it off the market for a while. Having it just sit there unsold is said to hurt your final sales price -- and people low ball you even more.
November 21, 2010 at 7:14 PM

Bullwinkle said…
{Google Reader updated my feed. I don't mind reading the blog - as long as the feed reader works and lets me know that you have posted. (Which, in my mind, is the sole reason for having an email list - to let us know that you posted.) (Btw, have you verified all the email addresses on your email list? Would that help with the counts?)}

Excellent socks :) I loving finishing stuff. (Maybe I should do more of that?)

Michelle said…
mmmmmm....I can smell the bread all the way back here in Texas! Have a wonderful visit with your parents.

(BTW, I agree with Joni about taking your house off the market for a while - how long it has been on the market was definitley something the realtor pointed out to us when making an offer.
November 22, 2010 at 7:13 AM

Tenna Draper said…
I've been a little miffed because u haven't been writing!

As to the email thing-shrug gettiing your posts via a feed reader (prefer it since I read a few different blogs. So yes and no. Writemore. I'll. Be happy.

kathrynarata said…
Wish I could finish socks, but even as a long-time knitter I can't figure out how to manage all those needles. So I do lots of afghans, which require circular needles and cable needles, which you would think would make socks easier. But making things to fit actual people are a problem for me. Sigh.

I don't mind clicking through to the blog, but it's tough on the Blackberry, so as long as I get some kind of email saying it's been posted, then I'll just wait till I get home to read it. Miss you when you don't post, and glad you're getting some relief through yoga. God bless.
November 22, 2010 at 8:24 AM

hollygee said…
I use Google Reader feed. There are lots of blogs that I will skip reading for various reasons, but

I NEVER SKIP YOURS.

I'm one of those gluten intolerant persons. I don't often miss bread, I do miss Chinese dumplings and dim sum. Most other things I can do work-arounds. Of course, when I started limiting all starches, I lost ten pounds…
November 22, 2010 at 9:29 AM

Anonymous said…
I don't mind clicking through. I sit all day at my computer anyway and I love getting your writing. It's like a present in the email.
Sarah
November 22, 2010 at 9:51 AM

momwhoknits said…
I absolutely have no trouble clicking on the link to read. I got all excited when I saw it in my e-mail this morning - because I knew there was something new to read and I wouldn't be disappointed (before my morning coffee) - so thanks!! I agree with Tenna - write more (but don't let it get in the way of bread making - and yoga - and knitting and, and , and!)
November 22, 2010 at 11:20 AM

Hannah said…
When I tried clicking through this morning, it took a good while for the page to load (and the picture still haven't), which makes it less likely that I'd want to click through in the future, much as I enjoy reading and understand what you're trying to accomplish.
November 22, 2010 at 2:08 PM

Barb Matijevich said…
Hannah, the load speed doesn't have anything to do with the click-through. I don't THINK Blogger is running slow (it might but it comes right up for me and no one else has complained) so you may want to check and see if your ISP is running slow for some reason. Thanks for the feedback, everyone!

Kathryn, you HAVE to try Silver's Sock Class for DPN's. I am not a particularly good knitter and I can knit socks without problem only because of this website! http://www.cometosilver.com/socks/SockClass_Start.htm

Suburban Correspondent said…
You're selling your NY house? Or is it the TX one still?

I tried going to partial feeds this past year (in order to up my page views) and some readers felt quite irate. So I put it back to full feed. Really, I make maybe 25 dollars a month - yarn money, I call it - an extra dollar or two won't make much difference.
November 22, 2010 at 11:21 PM

Becca said…
Those socks are lovely and they look perfectly cozy.

OMG, that bread. I'd forgotten what a nice thick loaf of bread is like. I just want to cut a thick slice and toast it, then slather with butter. These Europeans sell a loaf like a rock with a crust that crumbles upon contact and nothing but air inside.

Just seeing the letters "TSA" makes me want to rant. I was an explosives technician who worked on the bomb squad, so I feel qualified to say these searches are a joke.

Yes, I will click the link, but ONLY because it's you. I've deleted most of the blogs from my reader that don't have full content. There are very few that make the cut to stay that requiring clicking. Yes, I'm just that lazy that one more click, one more window opening on my computer is too much for me. But you, you I will do it for.
November 23, 2010 at 4:18 AM

ccr in MA said…
In order:

I don't mind clicking through from the feed reader.

Nice socks--Tara is a lucky friend.

Ann in NJ said…
I'm too lazy to figure out feeds, so I just have my list on the side of my blog, and can see if you update. :)

On the TSA thing, which I agree is messy and constitutionally complicated, it may actually be EASIER for your mom. If she goes through the scanner, they will see her knees (which don't look like a bomb)and she's done. No pat down, no wanding, done. It's nice to know someone can benefit from this!
November 23, 2010 at 12:30 PM