I'm on the couch again, having a bad pain day and kind of bummed about it.

HOWEVER, this does allow me to get y'all all caught up on our pumpkin picking, visitor, Halloween madness. (Click on the pictures to embiggen and appreciate my HTML coding prowess!)

First, we had Fall color.  I do so love the seasons. 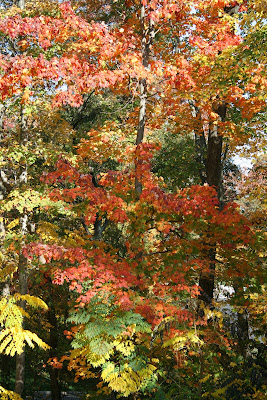 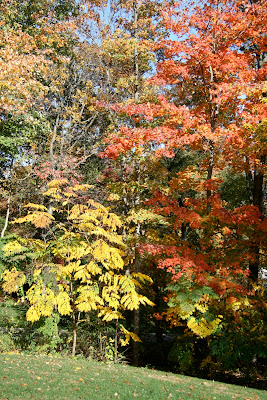 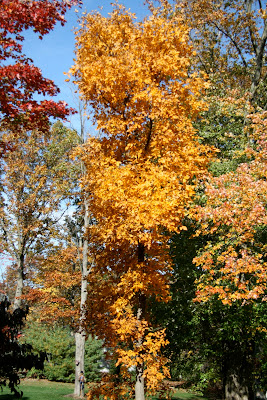 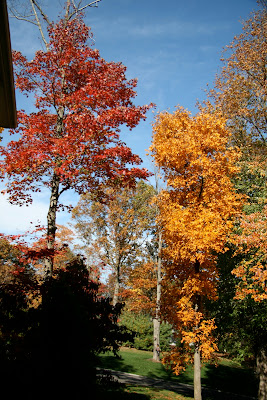 (These photos were taken out my front door.  Isn't it amazing??)

Ana (12) earned her orange belt at Tae Kwon Do. 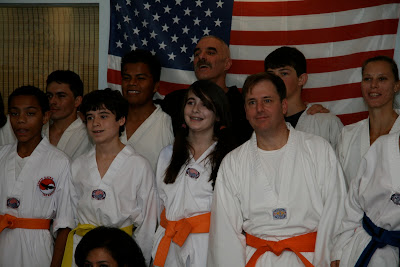 Then we went pumpkin picking.  In the past when we've done this, we've driven out to the Hamptons and experienced actual, real, picking of the pumpkins off the vine. Hence, when we saw the sign that said, "U-Pick Pumpkins" at a farm near Coop's work, we thought we knew what that was all about.

It turns out that "U-Pick Pumpkins" really means...well, "you select pumpkins after we've picked them and carted them into a large field."  Kind of like choosing from the big box at Home Depot, only you get to pay $0.70 per pound for all of that atmosphere. 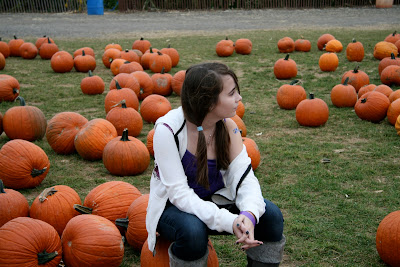 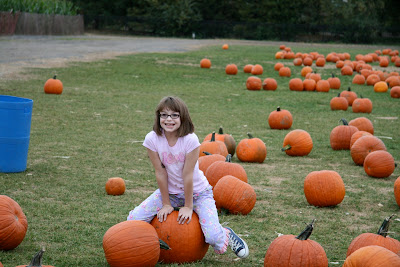 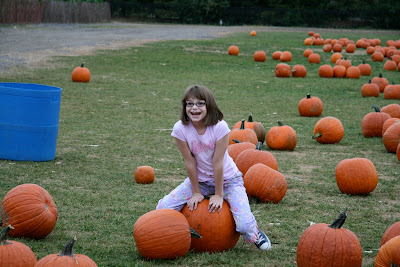 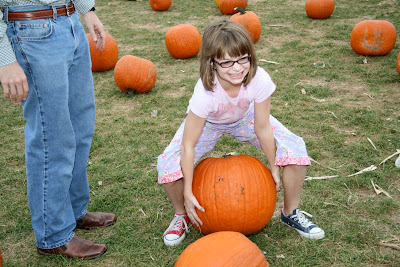 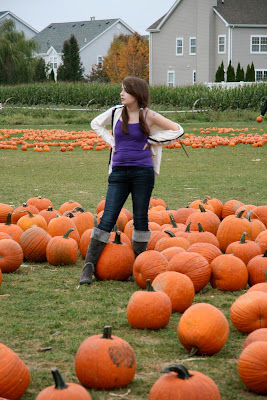 Then we had the actual Halloween extravaganza. 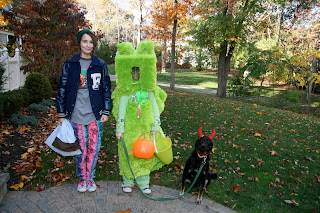 Jane is a gummy bear,  Austin is the devil and Ana?  Ana went as her dad, circa 1982. Rush t-shirt, letter jacket, Baylor hat and his very own vintage parachute pants.  (Yes, he still has all of those clothes.  What?)  Could quite possibly be the best costume ever.

Except for Jane's, maybe.  Because people got such a kick out of it.  And the making of it was really fun because my friend Kate (Dr.Kate from the comments) was in town and came over and I promptly covered her in green fuzz. 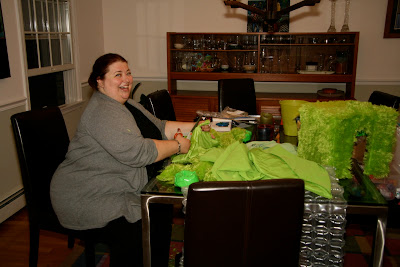 Here she is constructing the head of Jane's costume.

For which she received a hand-knitted pair of socks, taken off of my very own feet, because I am all classy like that. 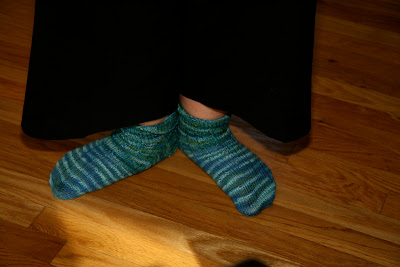 Standing in first position for the blog.  Y'all, the woman rocks.
The very best part of Halloween for me, though, came when Jane, dressed in full gummi bear regalia, met up with her new classmates at the town Halloween parade.  They were so glad to see her and wanted her to march with them so much that they started CHANTING for her.  As you know, the switch to the new school has been full of motherly angst for me.  To see her so accepted and so happy and so ...100%-taking-over-the-world JANE was an indescribable blessing for me.

It almost made up for the rude woman poking Ana in the back to get her to "GO! GO!" in the crowd along the parade route. I'm not sure what the woman wanted Ana to do (leapfrog?) but if I had seen it, she'd be missing her rude index finger right about now. Do NOT freaking touch my child. I think we've established how I feel about that.

In other news, one of Jane's goldfish died.  Like her mama, she processes things on paper.  UNlike her mother, she can actually draw. 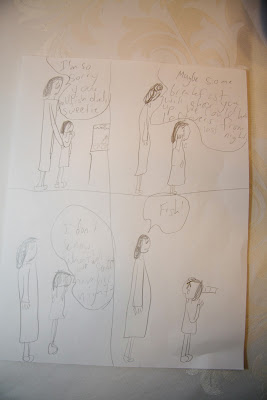 Must I always, ALWAYS, be the straight man?
The garden is about done for the year, except Jane has found an accidental pumpkin.  I think it will freeze before it ripens but still, it's a wonderful thing. 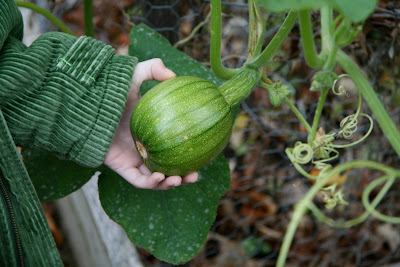 It's November which means NaNoWriMo, and I am really really far behind in my book.  Which is as usual, for me.  JANE, on the other hand, is well over 8,000 words into hers.  Also as usual.

At least *I* got a sweatshirt out of the deal. 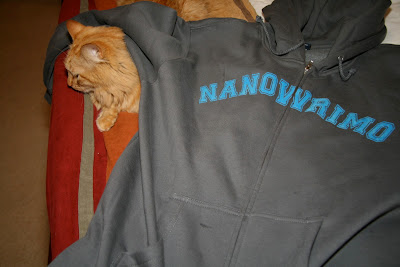 Shown here with Edward the Male Model.  (Rowr.)
It's taken me so long to write this blog post that I'm off the couch, feeling well and heading for yoga, which is my new favorite thing.  No, seriously, on Monday, OF MY OWN VOLITION, I did a little cross training with weights and the exercise bike to make myself stronger.  I know, I know...clearly, I've been body-snatched.

(Here's what happens when I try to do yoga at home.


And this? This is just a gratuitous picture of my gorgeous older daughter. 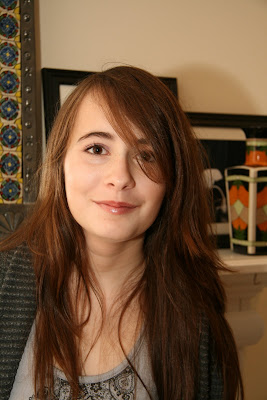 bethany said…
gorgeous indeed! and that gummy bear? utterly fabulous ... and soooo glad that she's settled in so delightfully. glad the couch worked so well, enjoy the rest of your day!
November 10, 2010 at 10:36 AM

Stefanie said…
Ana is breathtaking! Jane is still precious (but on her way to being just as beautiful) and never did I wish more I could be up there in New York with y'all!
November 10, 2010 at 10:40 AM

Karen said…
Yay, yay and more yay! But why did you all of a sudden become pregnant in the final frame of the cartoon? Is she telling us she doesn't want another fish but would prefer a new sibling?
November 10, 2010 at 11:27 AM

Barb Matijevich said…
Bethany, she's really doing so well at the new school. We are still working hard (all of us) to catch her up but she's getting it, she has a best friend and she's already terrorizing the boys. WHEW!

Stef, you should totally come for Thanksgiving!

Karen, that would take a modern medical miracle that even YOGA could not bring about. However, I do LOOK fairly pregnant on most days so her drawing isn't wrong, exactly.
November 10, 2010 at 12:38 PM

Unknown said…
gorgeous girl and great post. Thanks for your kind comments about my Finny.
November 10, 2010 at 12:57 PM

Bullwinkle said…
Oh - many yays! Love the costumes. (I think I gave away my parachute pants the last time I moved. Not too long ago.)

ccr in MA said…
I was so glad to read by the end that you were feeling better footwise, because the pain situation sucks, and all I could suggest is that cuddling some nice yarn might make you feel better. The Fall colors photos are gorgeous, and it's nice to see what the family's been up to and hear that things are going well. Yay!
November 10, 2010 at 6:41 PM

Marion Gropen said…
It's wonderful that you're feeling better. And your eldest looks absolutely FABulous, while the Gummi-youngest looks such a treat.

And you're lucky you're out in the 'burbs, rather than here in NYC. We don't get quite as much color, because of the moderating effect of the buildings and pavement. Not quite enough snap in fall's cold-snaps.

Then again, you get to shovel more later in the year, so I guess I shouldn't envy you. (Except for the accidental pumpkin. THAT is seriously envy-worthy!)
November 11, 2010 at 2:25 PM

Susan said…
So glad I clicked in and caught up. My sister loves her yoga, too I wish I could do it, but muy knees take me out of about half of the poses.