(Before I forget, I have the results for the Smelly Lotion Giveaway.  anash and TruBrooklyn, you have both won smelly lotion and/or yarn and/or my book. E-mail me at barb@sothethingis.com with your addresses and preferences for gift items.  Thanks for playing, everyone.  Y'all are so fun!)

I have been quiet.  Thanks to everyone who wrote in asking if I was okay or if I'd managed to, you know, like, break my arm while filling my car with gas or something. I'm fine, no (additional) broken bones. I think maybe that for me to really process the rather large shifts in perspective I am undergoing currently, I need a lot of silence and stillness and I only get that during the time when I would normally be writing. So, I guess I haven't been writing as much.  I'm sorry.

Yeah, I don't feel much different, either, although I will tell you that this past week has been HUGE for me because it's been my annual Momcation: the week when my husband takes our daughters skiing and leaves me for an entire week of solitude, creativity and pet wrangling. It was a great week, very contemplative for me. I needed it.

I finished up some projects. 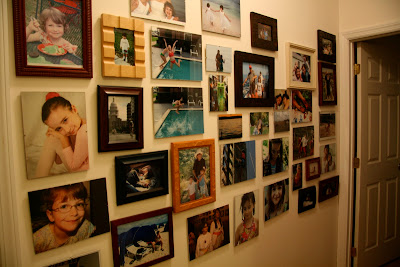 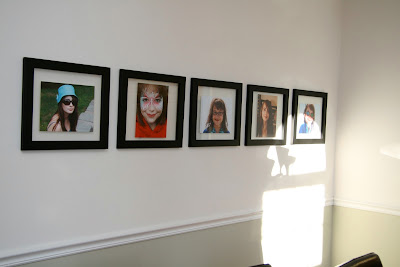 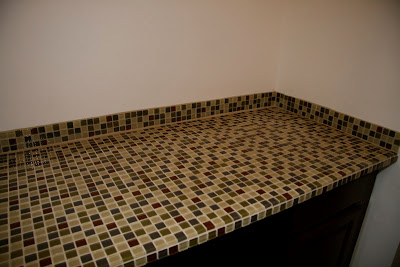 I did some basic maintenance--cleaned some drawers and washed the couches.  (The puppy still insists on sleeping on at least one couch every night.)

I threw a party.

It was really fun and kind of like an Artist's Date for me, although I did NOT wear a prom dress. (I was tempted to wear a tiara but I couldn't find one I liked.)

For one thing, I threw this party just as Barb --not as someone's wife or mother or daughter.  I threw it for people I know who might not necessarily be friends of my husband's yet. This was slightly disconcerting to my friends, but they totally rolled with it because they are really good like that. I called it The Indulgence Party and asked people to bring an indulgence (food or beverage) to share.

(And also, except for my friend Tina who left this unbelievable chocolate covered toffee over which I had to request an intervention the next day.)

Y'all, the party was for adults only.

I was having too much fun to take pictures so I don't have much photographic evidence of the festivities. You're just going to have to take my word for it-- there was a chocolate fountain AND brown-sugar/ cinnamon pop-tarts (the ultimate indulgence from my childhood). I wore the Beatles earrings that I only wear for very special, special occasions. 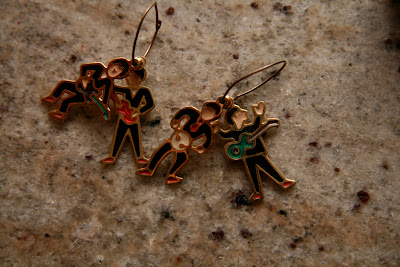 It turns out that my biggest indulgence of all (toffee aside) is having a house full of friends and laughter and music.  It was awesome.

So, those of you who don't know me in real life (or on Facebook) might not know that I have this sort of love/hate thing going with my hair. It just... well, let me put it to you this way: whenever my mother sees me with my hair down she looks at me, slightly horrified.  "I don't know WHERE you got that curly hair from." I think she just wants to be clear that it DIDN'T COME FROM HER.

The few hours leading up to the party were somewhat harrowing, hair-wise.  First of all it, was a terrible, rainy, icy wind kind of day. Secondly, my kitty Edward was ill and had to go to the vet.  Thirdly, I was scheduled to have a house showing, an acupuncture appointment and yoga.  The house showing rescheduled, I rescheduled the acupuncturist as I had inadvertently double scheduled myself and off to yoga I did go.)  Then I stood in the icy rain for over an hour, throwing the ball for my dogs so that they would be better party guests.  When I came inside, I was almost frozen myself so I took a bath, washed my hair, got dressed and looked in the mirror.

Words cannot describe the horror when I saw my hair.  Picture Aretha's hair (from 1970-something) on my face.  (I would do it for you but I don't have Photoshop on my Mac.) 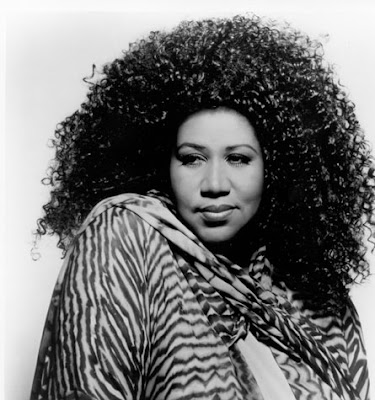 Thus began a series of events that threatened to torpedo my whole night. I'm still scarred from the remembrance so I've tried to recreate the horror for you (but today is a warm(ish) sunny and low humidity day so there is no way to accurately portray the gravity (or anti-gravity, depending on your perspective) of the situation).

Here is an approximation of what my hair looked like when I first saw it.  Picture it much, much larger and just breathe a little sigh of relief that I didn't put anyone's eye out.
Anyway, picture very, very, very BIG hair.

(It's just impossible to take a decent picture of oneself.  I took, like, 30 pictures.  20 of them looked like this: 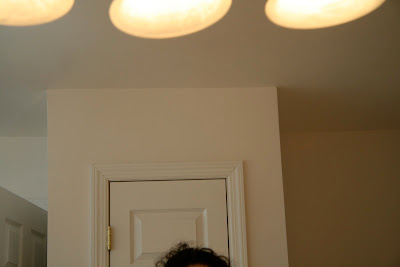 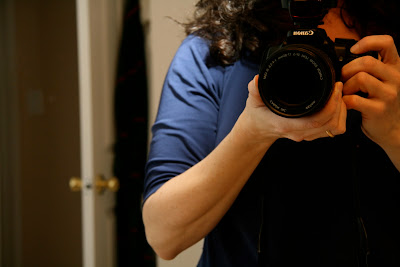 Suddenly I was transformed into a Miss Texas pageant contestant.

I had to really put my back into it to wrestle my hair into a clip for my party.

Really, it was a miracle no one was injured.
Email Post
Labels: Am I Out of My Freaking Mind? curl-o-meter digressions humor? Operation Living Out Loud perspective the Glamah of it All WHAT? Doesn't everyone?

Lynn said…
But I *like* big hair. With or without world peace. Big hair is one of my requests when I get my resurrected body. [Preferably red. And a bushel and a half of freckles, while I'm asking.] If you can lay hands on a copy of Kaffe Fassett's first book, "Glorious Knits", take a look at the gloriously messy hair all the women have.
March 1, 2011 at 10:32 PM

Sarah said…
Barb, I think you and your big hair are JUST FINE and even pretty magnificent. Whether you have the Texas Cheerleader look or the just hundreds of ringlets, let me tell you your mom was WRONG. There are plenty of us with straight fine hair that would kill for body. I even got my hair permed into your ringlets once. Tell yourself please your hair is beautiful and your mom just didn't get it.
March 1, 2011 at 11:08 PM

Sherry Sea from Austin said…
It was a great party and I have to admit that I thought your hair looked lovely but had completely forgotten that you'd taken curls out of it. I would trade you hair-types any day.
March 2, 2011 at 7:44 AM

Becca said…
I'm trying really really hard to work up the sympathy that this clearly requires. Because I DO so sympathize with difficult hair days.

But one whose hair will not curl under any circumstances all I see is curls that FILL me with envy. I used to get double perms, that's right, one perm given right on top of the other one and not only would there still be straight pieces, but any other curl would be gone completely in 3 weeks. My hair is defiantly, militantly straight. You could use my ponytail as a plumb line.

Your party sounds awesome and I loved all your hair looks (and I think Anne Hathaway sported at least two of them during the Oscars).
March 2, 2011 at 8:39 AM

Kris said…
Okay, I'm just going to say this - back when I was young and hot (as if!) I used to regularly pay good money (and lots of it!) to get my hair to look just like your "before" pictures. :)

Stefanie said…
The Miss Texas pageant hair KILLS me! That is just... wow. But your party looked like a lot of fun, and it's certainly a great idea to throw an indulgence party! You should make it a thing.
March 2, 2011 at 11:27 AM

Hash Dye said…
1: I love your hair
2: If it had been mine and driving me that nuts, I'd have pulled out the straightener.

Susan said…
I'm with Becca - LOVE the curly hair. One of my daughters has hair like that and she loves it even though everyone keeps trying to get her to straighten it. I tell her it is because they are jealous!!

You curly people don't realize how much the world loves curls because you are too busy trying to tame them!!

Bullwinkle said…
You inspire me :)

knittergran said…
I recently had a knit night sleep over for my knitting friends when my husband was out of town skiing. We had a great time, ate lots, knit even more lots, and stayed up late laughing and knitting. Got up the next morning and knit some more. dult parties are such fun! Even for us old, grandmother knitters.
March 2, 2011 at 10:47 PM

Rhonda from Baddeck said…
I have curly hair and argued with it for years before I finally decided to appreciate it. It's not as beautiful as yours, though. (I have to wear mine short.) Really, your hair is gorgeous WITHOUT the hot rollers.
March 3, 2011 at 3:20 PM

Karen said…
My hair is one of my favorite features, but I'd trade it for yours in a minute.

And brown-sugar cinnamon poptarts?!?!? YES, YES, YES! I hide the box when I buy them so I don't have to share with my kids.

Murr Brewster said…
Gad. Women would KILL for that curly hair. Reminds me of chatting with a friend I hadn't seen in years and he told me he'd been growing his hair out. "Shoulder length?" I asked, and he said, no---shoulder width.

My mom would definitely have tried to take credit, not blame, if I'd had curly hair. Like everyone else whose moms watched Shirley Temple at the pitcher-show, I got a Toni when I was in third grade. Humiliating.
March 4, 2011 at 2:19 AM