We've survived an earthquake, a hurricane, moving households and a plague of locust. (Okay, okay, so it was really just an incredibly loud cricket who chirped the entire night from up high in our living room, but still.)

We really DID have an earthquake, though, all along the east coast.  The girls and I didn't actually feel it because we were outside, but Coop really felt it at his office and made everyone evacuate to the parking lot.  I love this Facebook picture that made the rounds after the quake:
So, then we had a hurricane.  A real hurricane which knocked our power out early Sunday morning for six days, which wasn't as much fun as you might think, even if we hadn't been trying to pack for our big move. In some ways, I feel like we lost the last week of summer vacation dealing with the aftermath of the storm, even though we escaped much of the destruction felt by some of our neighbors.

I'm convinced that you underestimate your dependence on electricity until you suddenly have none.  It's not just the isolation of being (shudder) without Internet, either. Luckily, my husband's car has an outlet in it so we could recharge our cell phones and lap tops and even try to make coffee: 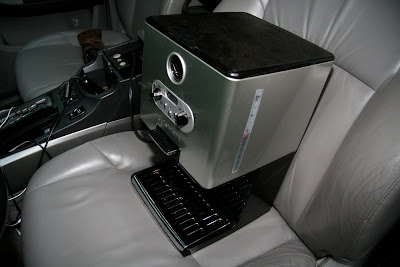 The coffee pot kept shutting off so we were reduced to heating water in a fondue pot over a sterno can and pouring it over the grounds.

We made s'mores in the fireplace: 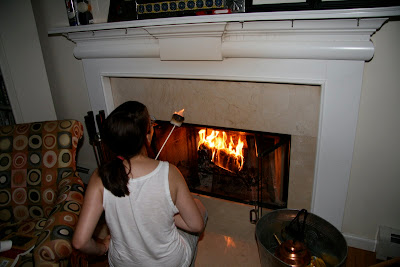 and did some watercolor painting by candle light: 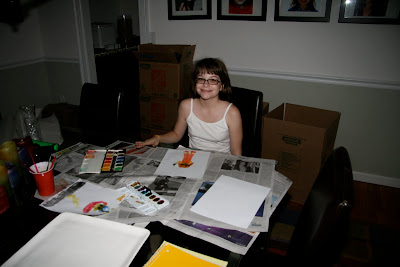 and then, by golly, the novelty wore off.  About the time I had to throw away everything in our freezer (except the tortillas my parents had just sent from Texas, thank the Flying Spaghetti Monster), I was about DONE with the whole experience.

Especially because we were packing by flashlight.

Luckily, our new landlord, who was in town emptying our new house and opening the pool, etc., during the hurricane, turned the house over to us  a few days early.  (The rental house never lost power, but is equipped with a generator just in case...yesssss.) We dragged some mattresses over to the new house and by Tuesday night (August 30), were happily camping in the new house.

And thus began the move.


We moved the cats on Wednesday.

The movers moved all of the big stuff on Friday and Saturday.  I was too overwhelmed to take pictures.  But gradually, we're settling into the new house.


We're still cleaning out the old house, but should be finished with that over the next three-four days and then we'll really be able to settle into the new place and make it our home.
Email Post
Labels: A picture is Worth at Least Ten Words Am I Out of My Freaking Mind? Everywhere Are Signs family I'm so DONE Joy Rush perspective pets putting down roots too much stuff

Mokihana said…
I'm so glad that The Tail is doing well, as are the rest of you. Moving is pretty chaotic no matter how smoothly it goes. glad you're all in safe and sound!
September 11, 2011 at 1:57 PM

Now, there's an idea whose time has come.

Bullwinkle said…
Welcome home! Wow - you've been through a lot to get there!

We've got a generator - and I don't think I'll ever get over the novelty, luxury and appreciation of it.

Glad everyone is o.k. - I've been thinking about you.

Ei said…
(and on the off chance it ever comes up agian...I love this. And I'm not a big ol' PW follower...someone just told me about it.)

Susan said…
Moving is always such a pain and you had quite a challenge added in! Hope things settle down soon and you have fun making your new nest.
September 12, 2011 at 1:05 PM

Lynn said…
Yes you gotta love ConEd for its capability to NOT keep the power on. Ask me how I know.....

Lomagirl said…
Hurray!
And thank you- I really want to move, but reading your post has reminded me of the immense amount of work involved, and helped to curby my impatience. I don't have the energy for this right now!
September 14, 2011 at 12:17 PM

Mrs.Q said…
Lol - our orange beastie also hides in the bathroom sink when he's stressed out. REALLY EFFECTIVE CAMOUFLAGE! (Or, you know, not!) Happy housewarming!
September 14, 2011 at 11:49 PM

Anonymous said…
You have such a beautiful home.

Thomas looks like our kitty Morris. He loves to lay in the sink.

The Not So Functional Housewife
http://thenotsofunctionalhousewife.com
September 28, 2011 at 5:02 PM