The Cooper B & B and a Birthday

It's been fast and furious here at the Cooper Bed and Breakfast. We've gotten the hot tub fully operational, had house guests from the 30th until the 12th, had to rather unexpectedly buy a new car, went apple picking, saw a Broadway show, and most importantly, celebrated Jane's eleventh birthday.

First, my parents and my cousin-from-Germany, Robin, were due to arrive on the 30th.

Since we recently moved, this necessitated a trip to Ikea in order to buy my older daughter Ana (13) a new bed, because she was still sleeping on a mattress on the floor and it was getting a little crowded. 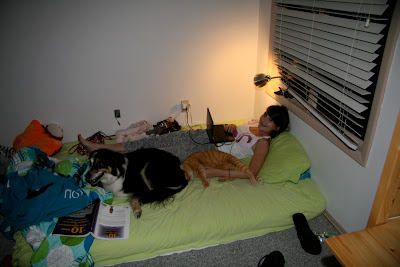 We didn't get it put together before the visitors arrived --because it had at least 8 BAZILLION pieces --but this turned out to be fine because my cousin is the Ikea Whisperer.  At some point, my husband came out of Ana's room on Friday night and said, "I can't even hand him the parts fast enough."

Then my nephew, who lives in NYC, came out for the weekend. We were running a little short of beds so Jane graciously gave up hers. 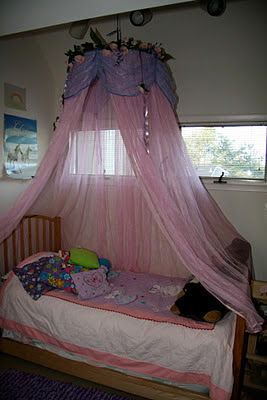 We put a mattress for her on the floor of our room, which was a nice reminder of why you would never want to actually share a BED with Jane.  All night long, we could hear her levitating slightly above her mattress, thrashing about, back and forth.  Some people think she inherited this trait from ME, but, believe me, she has taken it to entirely new heights. 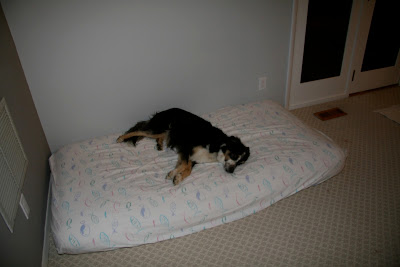 Meanwhile, everyone has departed the B&B and the mattress remains on my bedroom floor.  Scout has adopted it as his own.) (Parenthetical picture--boo YAH!)

Anyway, eventually, after drinking a lot of beer, the guys finished putting together the bed. 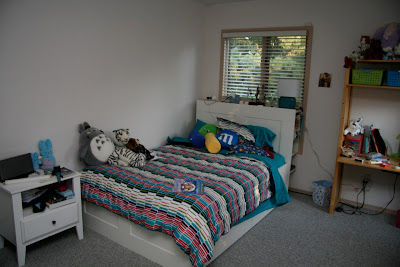 Which meant that we could get down to the really IMPORTANT stuff.  My nephew taught my mom to play Words With Friends, and after that, every picture I took of my mom looked like this: 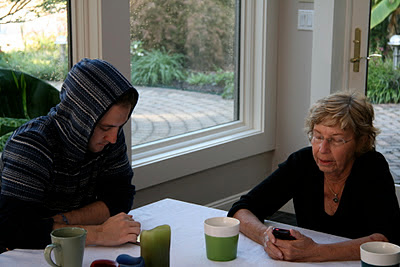 I'm kidding, of course.  I did get some good photos, despite the fact that my camera was acting up.


(I'm sure that had NOTHING to do with the fact that my cousin brought his superior camera equipment, including a Nikon D90 with an incredible lens. I think I just heard Santa faint.)


There was time on the beach:
And a trip apple picking, which turned out to be a big bust because Hurricane Irene ruined the apple crop this year:
We DID take the girls to a corn maze and turn them loose for the first time on their own.  We gave Jane a phone in case she needed help, which sparked a hilarious deluge of texts, the last one saying that while she hadn't exactly given up hope, we could find her will under her bed.


(She found her way out, for those of you getting worried.)


Then, it was Jane's birthday.


Somehow, Jane's birthday has evolved into this week long festival (she asks for special treats because, "it's my birth week.") culminating in her actual birthday celebration which includes: 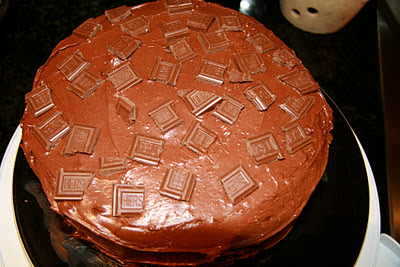 
(As an aside, I was worried that I would forget an ingredient when I was doing my grocery shopping.  Luckily, at MY store, there is THIS aisle:
)

A full-on Present Hunt, sort of like an Easter Egg hunt, only with fewer eggs. 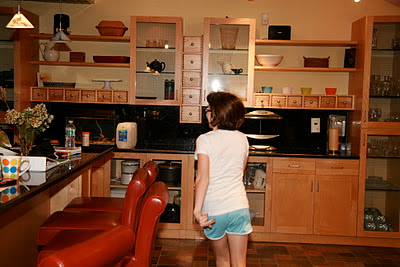 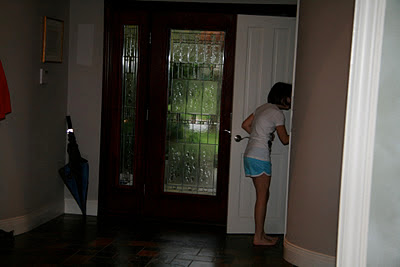 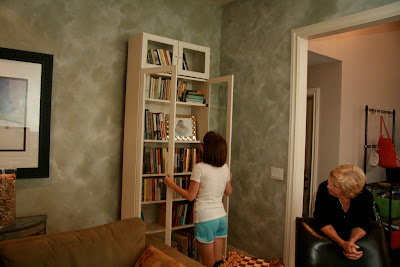 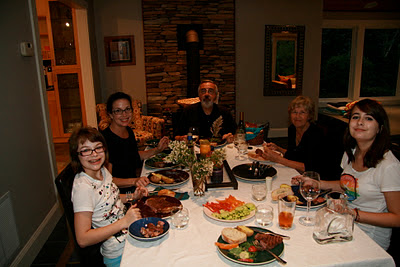 And then the Opening of the Presents:
Including a giant ream of paper, because, well, who wouldn't like THAT? 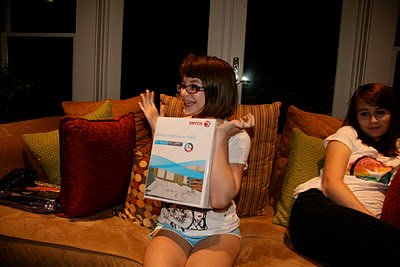 and some time before bed spent reading violent and inappropriate comic books while lying on the hot tub surrounded by her bounty. 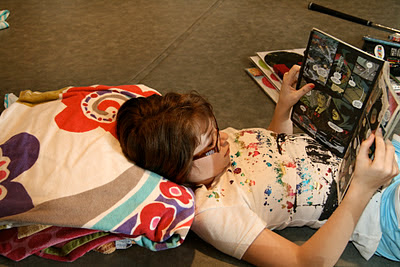 smalltownme said…
Happy Birthday Jane! A week of celebrating is certainly not too much. I love her bed! What did your nephew think of sleeping in that pink splendor?
October 20, 2011 at 1:51 PM

Kathy Ireland said…
You really need to tell Ana to calm down. LOL!

I SO recognize that look. Do they teach them that in 8th grade?

And lastly, thank you very much Mark Cooper for (presumably) working the camera so that we could get at least one photo of our favourite blogger.

Unknown said…
I am so glad someone else still has mattresses etc left in weird places after visitors have left. (and that someone else's pets assume it was left there for their use)
October 20, 2011 at 2:04 PM

tanita✿davis said…
Aww. Janey has such great hair. And those glasses. So young, and already such style! And levitation powers!
October 20, 2011 at 2:30 PM

bethany said…
sounds like the best kind of whirlwind! also, reams of paper are a most coveted gift in our house. fynn (5) is still generously doling out chunks to me when my printer runs out, despite his voracious drawing-paper consumption.
October 20, 2011 at 2:58 PM

Melissa Mead said…
Thank you Thank you Thank you for always being a place that makes me giggle and know that I'm not the only one. Today my son ran into the house asking for wire cutters. I asked why? He told me his baby chick had fallen down into wire. I went out to find that the chickie had somehow ended up 6feet down inside a column of bricks. I thought of you immediately. After trying to airlift chickie out with a yogurt bucket my husband managed to remove a brick from the bottom of the column. Chickie is free and safe again! WHY was Anna on the roof?
October 29, 2011 at 9:11 AM