I have so much to tell you.  Ana got her braces off.  We went to get our Christmas tree and decorated it. Coop had a birthday. We gave a little UN-Thanksgiving party. I ran into a Sydney doppelgänger. I finished my last freelance article of the year, all about polar dinosaurs --which was fascinating.

But honestly?  All I really want to talk about is yoga. (In fact, this whole blog post is about yoga, so if that is of no interest to you, you can skip right to the bottom to see my gorgeous older daughter with the straightest teeth on this planet.)

I'm a little obsessed with yoga at the moment.

A few months ago, my yoga instructor introduced me to another yoga studio and a woman named Yvonne, who teaches the same kind of yoga that he does. Actually, I was too shy/terrified to go by myself so he MET ME THERE and took a class with me. Is that just...incredibly kind?  He knew I was looking to augment my practice with him (he is unable to offer as many classes as I need because he runs a thriving martial arts center) and he knew that I would never have gone by myself. I am just...pathologically shy. I hate having to explain my situation and the FULF and everything. But this woman teaches the same kind of yoga that I already take (Dharma Mittra) so I think he knew it would be really good for me and then he just kind of made it happen. How did I get lucky enough to have a friend like THAT?

Anyway, I've been taking Yvonne's 8:00AM class on Mondays, Wednesday and Fridays for eight or nine weeks now.  It's a lot harder than the other classes I was taking, because those are beginner classes. This is YVONNE'S beginner class, but if I had taken it when I was newly off the couch, it would have killed me.

So, for a couple of months now, I've been going to Yvonne's studio on MWF at 8:00 and then going to Chris's studio on Wednesday and Fridays at 11:00.  Five yoga classes a week.

In eight weeks, I've seen some positive changes in my body, and I've certainly seen some increased strength.

Then, about a week or so ago, I tried taking the Power Yoga at Yvonne's.

And something snapped in me--in a good way, I mean.  I think.

I guess it's like high-school: I want to sit at the bendy people's lunch table.

I'm taking as many classes as I can (on Friday I took three classes on one day!) and at least once a day I WATCH some yoga on youtube. I guess I'm going to need an intervention before it's all over, because it's two days until Christmas and I haven't ordered cards, done any baking, or decorated outside.  The girls and I haven't even made our traditional gingerbread house.

Obsessively compulsively loving yoga seems sort of...well, wrong.  Not in the spirit of true enlightenment, if you know what I mean. I can't help it--I am dreaming yoga dreams! I think part of it is that I seem to have some natural yoga ability (I'm pretty flexible) so my dreams seem within my grasp if I can build my strength.

Everything else?  Not so much.

Here, look at the pretty girl and don't judge me: 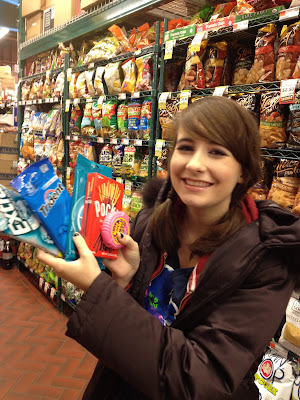 Also, tell me this dog doesn't look exactly like Sydney (scroll down if you visit the link--there's a picture of Syd.): 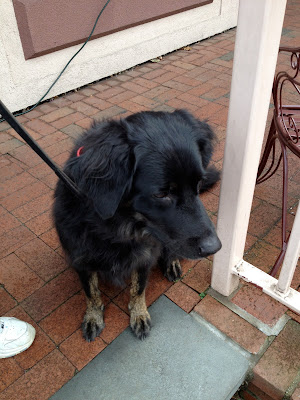 Email Post
Labels: Am I Out of My Freaking Mind? gratitude Not enough therapy in the WORLD OCD? Not me. Operation Living Out Loud sydney WHAT? Doesn't everyone? Why I Totally Could Rule The World yoga

Ann in NJ said…
Can I tell you that you have inspired me? I don't have a FULF but I have feet issues (neuropathy) and back and knee issues (arthritis) and am emphatically NOT bendy, but...
I recently joined a new gym and they are just starting yoga classes and I have been twice now. And will probably go next week, and hopefully beyond.

Bullwinkle said…
I too am jealous - 5 classes a week :)

Since retiring, I haven't found a class yet.(Although I got a lead on one yesterday!)

Several perspectives on being obsessed with yoga a)life needs balance and maybe you're making up for lost time b)it might just truly be your passion (way cool! if it is) c)it's good for you, so what if you're obsessed? when it ceases to be good for you (hopefully never) you'll change.
December 23, 2011 at 6:46 AM

Sherry Sea from Austin said…
As a compulsive walker and cyclist, I certainly understand!
December 23, 2011 at 7:04 AM

Kathy Ireland said…
You are inspiring me! Now that we share yet ANOTHER similarity (FULF), you have inspired me to get back to yoga. Monday (assuming there's a class on the day after Christmas) - I'm there!

Loving yoga? So NOT wrong!

And Dude - yoga dreams? That means you're sleeping! LOL!!!

tanita✿davis said…
I have a pin which says "Yoga Kills." It's ironic, but I am thinking of mailing it to you...

Okay, kidding. Your kid's got some gorgeous teeth!

I will chuckle as I imagine you building the gingerbread house on Christmas Eve - who cares if it doesn't get done, that just means you'll just have different memories this year. (Gingerbread yogis?) Happy Holidays.
December 23, 2011 at 9:59 AM

Cooper Heyes said…
3 classes in one day? That’s amazing! I commend you for such passion and determination. Yoga does wonderful things to people. Given the fact that it can make our mind and body healthy as it exercises our body and develops our inner consciousness, it also helps us be more compassionate and establish better relationships with our loved ones. Just like how you show love to you girls. And seeing how happy your daughter is in the photo, I can see how close you are to one another.
May 10, 2012 at 4:18 PM