Asking for a Present

So, last Sunday was my birthday.  I turned 47 --happily.  I went to power yoga, spent some time with my family, wound some new yarn...it was a great day.

On MONDAY, my family left for five days of skiing/snowboarding, leaving me to my annual "momcation," a time of solitude, reflection, yoga, meditation and catching up on back episodes of Downton Abbey. (Just hush up right now.) (I actually watched the last one TWICE, while turning the heel on my latest Sock-In-Progress (SIP), listening to Edward purring beside me, and weeping, weeping, weeping.)

I have a lot to say about this time--the lessons are coming fast and furious (not from Downton Abbey, per se) and I'll write about it in the future.  (Soon!  I promise!) (No, really!)

But today, I want to ask you all for a present. I know I'm not supposed to ask you to give me anything for my birthday.  It's bad form and who am I, eleven-and-Jane-Cooper? It's important, though, or I wouldn't ask.

See, I have this new friend.

Her name is Jenna. 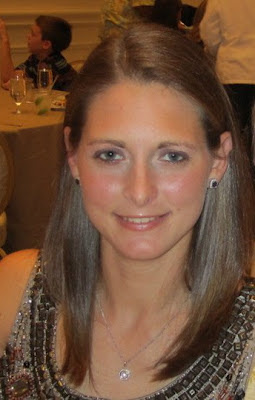 She's a young friend, in her twenties, whose acquaintance I made through the martial arts/yoga place where I first began my journey back to health. I don't actually remember how we officially met, but we showed up at some of the same parties and then one day back in October, I heard her talking to another mutual friend about her chronic pain journey.

And, well, it made me sit down and put my head between my knees.

It's been seven years since Jenna first began having debilitating back spasms --spasms so bad that they lock up her entire body and leave her in excruciating pain and sometimes hospitalized. She has tried Eastern and Western medicine, massage, Reiki, becoming a Vegan, and a thousand other things in those seven years.

She also managed to go to college and on to get a Master's degree and earn her black belt in Tae Kwon Do. (I know. I KNOW!  But I understand that, too. I understand the need to prove that the pain isn't going to stop you.  Until, you know, it does.) She also survived being hit by a car and the PTSD associated with that, endured a wicked Lyme infection and a volatile thyroid that may or may not be responsible for her current GI issues.  She's been through the wringer, and she's just...kept on going.  She created this wonderful life of service by volunteering at an equestrian therapy program called Horseability and she hopes to start school soon to become a physical therapist. 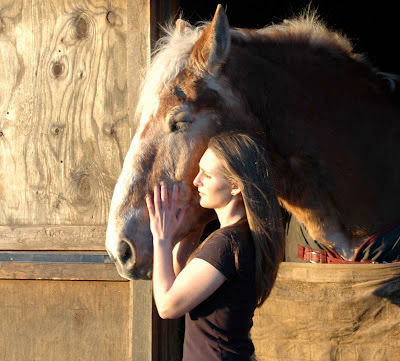 Most recently, she's broken two ribs and the doctors don't fully understand why. But when that happened, the organization she volunteers with told her that they really needed her to be physically stronger in order to continue working there. Which, you know, is understandable, but absolutely, completely heartbreaking.

Last Friday, a group of friends got together for dinner to celebrate the February birthdays of our group.  (It's a popular month.)  And Jenna came, although she was too ill to eat.

And, I don't know, there was something about the look on her face that has stayed with me all week.

I think it's that I recognize that look, you know? I was so there.  I am a strong and stubborn woman, but there were times in my chronic pain journey when I was just barely hanging on. When I had that same set to my teeth.

When I had that despair in my eyes.

So, anyway, this week, I've been dedicating my yoga practices to Jenna.  Just offering up the wish that my practice might create some positive healing in my friend.  Yesterday, she dropped by for a visit, and said her pain wasn't so bad this week, which NATURALLY, I immediately associated with me, me, me. Well, okay, I didn't.  But I DID get an idea of what I'd like for my birthday from you all.

Over the course of the next few days, whenever you think about it, could you send a prayer, or positive thought, or a deep healing vibe to my friend Jenna?  Just some sort of conscious thought of healing for her. Breathe it in and breathe it out.

I don't know that it will help, but it certainly can't HURT, and what if that's really how we change the world? I know that the power of your collective positive wishes for MY health had a direct impact on MY healing.  My deepest hope is that we can do this for Jenna.

Susan said…
Sending as much positive energy as possible. She has so much on her plate. I feel like I should never whine about my body again.
February 24, 2012 at 7:23 PM

Barb Matijevich said…
Y'all are just the greatest people. I am humbled by how good you are. THANK YOU for loving my friend. I feel in my bones that this HAS to make a difference. How could it not?
February 24, 2012 at 9:08 PM

Bullwinkle said…
awwww ... You are wonderful.

Karen Moore said…
Happy to pray for Jenna and also for you! My husband has chronic pain so I understand what you're both going through! God's blessing to you!!!

tanita✿davis said…
What a lovely person you are. My birthday is coming up, too -- and one of my presents is you.

hokgardner said…
Such a lovely gift request. I'm all too familiar with watching someone with chronic pain. I'll send good thoughts her way.
February 25, 2012 at 5:01 PM

Anonymous said…
Since we're all in such a praying mood...

I said my prayer for Jennna, and now request this...

I have a son who's had a lot of setbacks in his life. He is facing a huge loss that I know he will not be able to cope with, but he will be needing prayers about it, to get him moving so that when the loss does occur, he can still maintain on some sort of even keel. I've been praying for him for the last 34 years, and I don't know..maybe I'm just not asking for the right stuff. But maybe one of you guys will.

Anonymous said…
I know Jenna from HorseAbility, actually, I was there when that picture of her and Bruno was taken. I wish all the best for that amazing girl. She has been such an inspiration to me. Keeping her in my prayers.
July 1, 2012 at 11:12 PM