Losses, Necessary and Not

So, while we were in New York City attending my yoga teacher training graduation, part of our house caught fire and burned down.

Well, okay, it wasn't really our HOUSE, but it sounds really dramatic to say it that way.  It was actually our bar-b-que pit area.

And it wasn't actually OUR house, but the house we are renting.

Still, it was a really dramatic and unsettling end to a wonderful day. 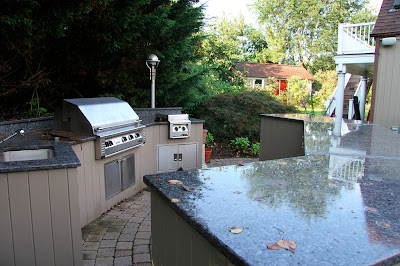 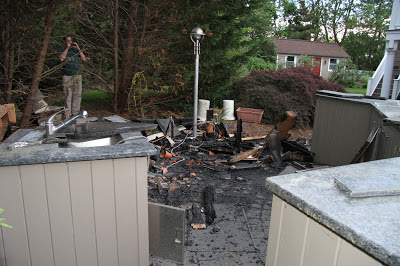 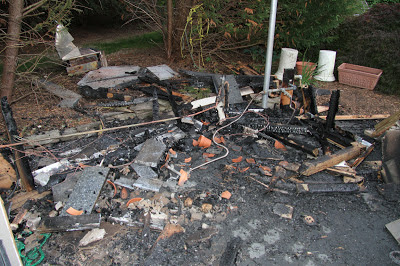 As you can see, it could have been much, much worse.  And we have insurance (can't say enough about the importance of having renter's insurance.)

Our landlords are just...so incredible.  Get this, we were in New York City for the graduation. I took a yoga class with Sri Dharma Mittra before the graduation ceremony, while Coop took the girls to the Natural History Museum.  When I got out of class, I had several texts and voice-mails, including one from my landlord that said, "Call me ASAP."  When I texted back, he said it was nothing important and to enjoy my day.  So I texted my husband who said that he'd talked to our landlord and not to worry, everything was fine.

The two of them had colluded so that nothing would spoil my day!  Isn't that amazing and thoughtful and sweet??

Unfortunately, there was a voice mail from the Fire Chief of our village that told me our cabana was on fire.

A screen-capture of my text messages to my spouse: 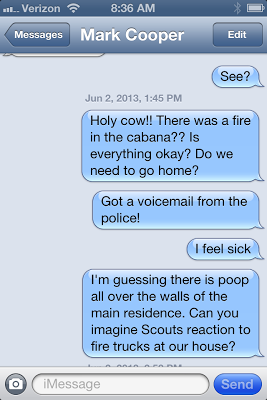 You can tell I'm distraught by the missing apostrophe on Scout's name.  (As it turns out, there was no poop. Thank goodness Coop had run the dogs that morning and Scout was relatively calm.)

Anyway, it's been a few weeks and Coop and I are beginning to not see everything as a fire hazard anymore.  Our beloved Elmer came and did a lot of clean-up, Coop and our landlords have been dealing with the insurance claim and our landlords even arranged for a new grill for us to use while the other one is being replaced. We've used it and nothing has caught fire.  Life is returning to normal.

Well, you know, as normal as things get, given that we are moving back to Texas and are in the process of saying goodbye and wrapping things up. It seems that my heart is perpetually sore as we do things for the last time.  Yesterday, Katherine took her last final and I found myself choked up as we walked out of the school for the last time.  That school has been such a blessing for us.  It was very, very hard to say goodbye --so hard, in fact, that I couldn't bring myself to say that word to the founder of the school on the last day. "We'll keep in touch," I said.

I hope we will.

Goodbyes are tricky, though.  When we moved from Austin to New York, several of my good friends just, kind of...disappeared from our lives during those last few months. At the time, I remember being hurt.  But the same thing is happening up here as we prepare to move back to Texas --people I've considered close friends have retreated. One of my friends even broke up with me on Facebook.  (Gasp!)

Part of this is probably due to my own frantically busy schedule as we try to fit everything in in this last month before we go.  (Hold on. Hold on a second. Have to put my head between my knees as I contemplate that the move is in a MONTH.) We had my graduation, the unscheduled fire, my mother-in-law's visit, Kath's School of Rock shows (they deserve their own post), the awards ceremony for the school (both Cooper girls brought home various trophies), Kath's graduation from ninth grade, finals, teaching yoga (still teaching through the end of June,) trying to get bids from movers, and oh, yeah, finding and buying a new house in Austin (pictures soon, I promise.)

I've been a little scarce.

So, I understand.  I really do.  It is easier to cut ties than to say goodbye. I get it.

But I just want to say...even when I'm not here physically, I am HERE for you.  And the door to my house, in whatever city it happens to be, is always open to you. I mean it.

(Just be a little careful walking in, given that Scout is a little jumpy.)
Email Post

Unknown said…
Barb, I've finally read your blog. The feeling I am left with is I wish we had become friends sooner. I've so enjoyed meeting you and your family, and happy that Catherine became friends with Harold, via SOR. You are a lovely spirit and am sad you are leaving.

LaDonna said…
OMG to the fire! You're right, it could have been so much worse...thank goodness it wasn't.

BIG congrats on your graduation!! That really was sweet of Coop and your landlord to try to keep the bad news from you.

As for the move, SO huge! I understand the need/want to move back home. That's why we left Seattle. It's not that we didn't like it out there, but Fargo is so much closer to family and friends. I don't regret that we moved to Seattle, but don't regret the move home either.

The friends piece can be hard. Yes, some people are just not good at goodbye. But I just remember that passage that says "people are put in your life for a reason, a season or a lifetime." You'll say goodbye to those folks who were in your life for the New York season, but you'll start a new season with new friends and you'll also get to reconnect with those lifetime friends you left back in Austin.

tanita✿davis said…
Ooh. I know what it's like to have the friends retreat, and to be the retreating friends. Sometimes it seems like we and our emotions and our hurt that you are leaving are just in the way.

Such turmoil, and such drama, and yet -- there will be glimpses of such grace. Look for it. Take your head from between your knees - when you can - and keep your eyes open.

Mokihana said…
When we made a big move, I thought I'd remain friends with those I was incredibly close to. We shared everything, and it stunned me that it didn't happen that way. So for awhile, til I made new friends, it was a lonely time for me. I just couldn't believe that the women I was so close to would disappear from my life. I didn't think they were friends just for a season, but I guess they were.

I'm happy that you're moving back to where you already know people... and very happy that the fire was outside and that no one was hurt.

Ei said…
Ick. You totally made me realize that I retreated on someone in sort of that way (there were some other dynamics at hand but...yeah.)

:/ Now I've got to figure out how to...unretreat? Anyway. I'm glad for the insurance and the lack of poop spackled walls. I'm glad that if I didn't get a guy like Coop, at least you did. I'm sorry you are going to miss all that you built in NY while you were there, and I hope you find Austin all that you want it to be when you return. And I hope you find an awesome school for the girls upon your return.
June 20, 2013 at 2:45 PM

Barb Matijevich said…
You know what, EI? I think you can probably just own your feelings to your friend and all will be forgiven. That actually happened to me with another friend recently, when she retreated and then came back. I told her that no one can understand the losses people carry around with them, that I respected her right to protect herself however she needed to, and that I'd be here whenever she was ready. She came back when she was ready. I feel really blessed by her presence in my life so I'm really grateful she did!

Judy Lee said…
I just keep thinking about how yoga isn't just a physical exercise ... it's also an inner journey. As with-out, so within. You've mastered the majority of your physical world challenges with yoga, now the Universe is laying out the mat for you to master your inner challenges. I'm inspired, thrilled to be along for the journey.
June 20, 2013 at 7:04 PM

Karen (formerly kcinnova) said…
Having lived the Army life for 21 years, I am so very familiar with moving and the way it impacts friendships. I feel some of that pain with you.
June 21, 2013 at 5:11 PM