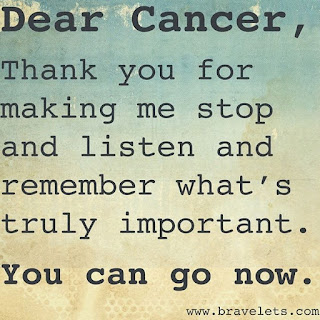 I'm going to say the word breast in this blog post a lot. I'm sorry--I've been trying to skirt around it, but it's just hard to talk about breast cancer and breast reconstruction surgery without talking about, um, well, breasts.  If you're an easy blusher, this might be a good post to skip.

To recap: I was diagnosed with breast cancer in my left breast. I had the lumpectomy on May 18th (with clear margins and no further evidence of cancer --woot!) and then I had the second surgery, the reconstruction and reduction, on Wednesday, May 24th. It was a big surgery and I now have these cute little breasts in a size I have not worn since about sixth grade.

Seriously, they are freaking ADORABLE.

Or at least they will be once the bruising goes away. And when the scarring heals. The scars are intense: you can google breast reduction surgery for an idea. (But if the NSA calls, we never had this conversation.)

I know what you're thinking and you're right: I'm NOT a plastic surgery kind of girl. But the thing is that if I hadn't had it, I would have been left looking something like an abstract painting, and well, it's been a hard enough year. I only had cancer in my left breast, so that's the one that had the lumpectomy, which made it smaller than the other breast. And it turns out that radiation, also only needed in the left breast, would have essentially stopped the aging process in that breast.  So I would have been left with one smaller, perky breast and one larger and sadly aging breast.

Interestingly enough, it was my lumpectomy surgeon who suggested the reconstruction surgery. He's not a super touchy-feely guy so I was a little surprised to hear him say, essentially, that having cancer does a number on a person's self-confidence and self-esteem. He was right. After the lumpectomy, I was teetering on the edge of a pretty big depressive episode when the reality of having cancer hit me. I think if I hadn't had a little something positive to look forward to, I would have been in trouble.

Now I heal enough to start radiation.  A lot of people have asked why I need radiation if we got all of the cancerous cells. The short answer is that my cancer cells are high grade, which is NOT what you want, so I am considered at high risk for recurrence. My doctors were all a little taken aback that I asked because it's such standard protocol now for women with high-risk DCIS to have radiation treatment, and the downside is minimal. The best news of all is that after the six weeks of daily radiation, I'm done. My cells are not estrogen responsive so I don't have to take the dreaded tamoxifen for five years. I am really looking forward to putting this behind me.

I will say, though, that I have a lot of thoughts around having breast cancer, especially around this idea I have that cancer is a sort of spiritual journey. I'll be saying more about that soon, and about the Tired, which is unlike anything I've ever experienced. And about the things people say and the lessons I've learned this year, which stands out as being the one that left me the most vulnerable I've ever been. And how courage in conjunction with that vulnerability creates a vessel for grace and kindness and gratitude.

Thank you all for your love and support and generosity and every other good thing. I am blessed. Maybe that's the real "b" word.
Email Post
Labels: Barb v52.0 cancer cancer fairies cancer fun gratitude Happily Ever After healing health joy kindness

Karen (formerly kcinnova) said…
Courage in conjunction with vulnerability creates a vessel for grace and kindness and gratitude. I love this, Barb.
And the even-ing out/reconstruction is also a good preventative measure for back pain.
To your healing and your health!
June 4, 2017 at 11:28 PM

Suburban Correspondent said…
It makes me want to cry that you feel you have to explain why you're doing the reconstruction on both breasts! No one expects you to walk around with "the odd couple" on your chest, you know - not even an option, IMO. And, as a fellow big-breasted gal, it seems to me only natural you take advantage of the one little upside of this nasty cancer business. I can't believe they took care of it all so fast, too! I think they used to wait longer between surgery and reconstruction. Cancer specialists do seem to be a lot more considerate of women's psyches than they used to be.
June 5, 2017 at 12:15 AM

Becca said…
I had no idea that radiation would have that effect on a breast. That's kind of fascinating! I have learned so much from your posts, but mostly, I have learned what a truly beautiful person you are inside and out. Your strength is palpable, and such a gift to see. Thank you so much for continuing to share your journey with us. Your girls are fortunate to have such a lovely example of love and strength. Onward and upward!
June 5, 2017 at 12:16 AM

Jennifer (Jen on the Edge) said…
What Suburban Correspondent said. You don't owe anyone an explanation.
June 5, 2017 at 10:58 AM

Barb Matijevich said…
Just to be clear, I don't feel like I owe anyone an explanation. But part of being a personal essayist is sharing my thought processes, as twisted and convoluted as those may be! My goal is always to leave a trail of breadcrumbs in case my readers find themselves in a similar situation.
June 5, 2017 at 11:44 AM

tanita✿davis said…
As buxom as I am, and as many times as the girls have gotten on my last nerve, I've never been a plastic surgery girl, either - but I definitely agree that your medical folk did right for you to encourage you get it done. Being even and at least mostly symmetrical is part of our human definition of "normal," and normal is likely something which puts you back into your comfort zone. You've been brave enough about other things - viva la perky!

Judy Lee said…
This sounds just like something Brené Brown would say, "... how courage in conjunction with that vulnerability creates a vessel for grace and kindness and gratitude." You are an inspiration. My girls have never been matched, not even close, but I'm of the opinion that they rather enjoy their individuality.

I wonder if you are familiar with the healing properties of wheatgrass juice. If you can get an organic source and squeeze it yourself, it can do wonders for the body.
June 5, 2017 at 7:02 PM