For those of you keeping score at home, another miserable attempt to give my husband a present has been foiled. Again.

See, in our move from Texas to New York, Coop's pint glasses, the ones with the peeling Pete's Wicked Ale logos? Well, they mysteriously went missing. He's been pining for them because they were the only glasses we had that held a full pint of beer, meaning you could pour an entire beer, put the bottle in the recycling and not have to carry both a bottle AND a glass around with you. So, I set about finding some replacements that would please both of us.

After much deliberation, I found what I thought were the perfect ones. No logo. Nice clean lines. Pint glasses. The only thing was that they were only sold in sets of 24 but I figured, well, we'll have a party at some point and there will be a lot of beer drinkers.

The glasses, you know, the PINT glasses? Arrived yesterday.

They are smaller than I thought. 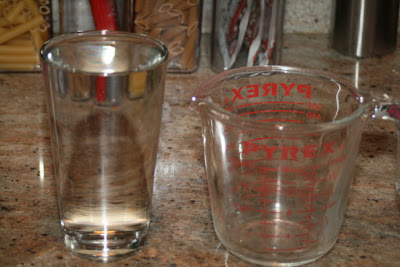 Oh, yes to can put a pint's worth of liquid in them all right. It's just that if you actually want to carry the beer WITH you anywhere, you're either going to need a straw or you're going to have to bend way down and slurp the first ounces from where the glass is setting on the counter.

That ought to be a fun party, huh? Can't you just picture 24 burly men lining their beers up on the counter, pouring and then bending waaayyyy over to slurp? Synchronized Beer Slurping--sure to be a new sport included in the 2016 Olympics.

Not exactly what I was going for.

Except, it appears that my blogger friends? Are MUCH more eloquent than I.

Earlier this week I went to the grocery store, with my children in tow because, hey, that SHOULD be plenty safe since they eat exactly three things. Only, FINDING those three things and ascertaining that they are remotely healthy is simply impossible. We left with a box of Lucky Charms (magically delicious) and a Polly Pocket set. I was going to write about how hard it is to find anything to eat at the grocery store when I remembered that my friend MadMad had already written about that here.

So then, a friend sent me this which made really want to write something about protecting the environment and about trying to divine the fine line between not having any impact on the planet at all and um, living in this world. But Miriam, over at Farm Suite, already kind of covered that here.

So, then the girls and I went to Walmart, which I hate. For reasons that Kate has so eloquently detailed here. We did manage to leave without a single plastic bag, though, and we only lost about half of our will to live in the process.

And then I wanted to write something about Sarah Palin's pregnant daughter, but Mrs. G. wrote every single thing I wanted to say, right here, and I feel the need to add a big thanks to her for saying it in such a gracious, kind, no bashing, third person kind of way.

I kept thinking of things I could write helpfully about and then remembering that some other writer had already pretty much covered that topic. So, I thought I'd write a post about it, except, um, well...

Having made that really clear, I have to tell you about a friend who runs a FANTASTIC yarn shop ON-LINE. After today, I'll feel a little bit of a conflict of interest in promoting an online shop, because I really do feel that a knitter gets a lot more than just yarn from his/her LYS. Dudes, in all honesty? I got the group of women who made it impossible for me to just pack up and move back to Texas --and there were/are times when I really, really wanted to do just that. But I can't leave them. I love them.

But since I ALSO have this inadvertent real estate empire working (sigh), I am really, really watching my pennies. And the thing is, once I started making and felting bags, I started needing a lot more yarn. (I'm dying to show you some pictures but since I have been working on Christmas presents, I'm trying to be good.) The yarn I use for my bags is called Noro Kureyon and it costs about $9 a skein if I buy it in a yarn store. Online, at my friend Sue's shop called Little Knits, it is $4.68 a skein and less than that if you buy a full bag! She has other truly amazing deals that may cause you to have a falling down with your credit card. But just think of all the money you'll be saving!

In my haste to post yesterday (get it??? POST HASTE! HAH!) (Ah, me, I crack myself up.) about going to see the U.S. Open, I forgot to tell y'all the classic quote for the day. As soon as we sat down, Jane (7) turned to her father in amazement. "Is ALL they show here TENNIS?"

And then a little bit later, she asked him, "Hey, is this live?"

knittergran said…
Wow! Thanks for the link to the online knitting store---but I do promise to keep spending money at my LYS (hard not to when I sit there every Thursday evening breathing the fumes).
And thank Jane for me-I needed a really good laugh today and she sure did it! How funny!
September 4, 2008 at 12:28 PM

And, I'm sure that you would add your own fantastic perspective to whatever has already been discussed. But check out Mary Alice's post about Bristol Palin. It's fantastic!
September 4, 2008 at 1:15 PM

Unknown said…
those pint glasses are probably not small, the average bottle of beer is less than a pint. try it with a bottle of beer and i bet it fits better
September 4, 2008 at 1:29 PM

Oh, and the pint glasses? I had that EXACT same experience. Got me in big trouble when the originals were "lost in a move."

And thanks for the mention. But you know there's nothing new under the sun. That's probably why NABLOPOMO works... one subject, hundreds of different writers.
September 4, 2008 at 1:50 PM

DK said…
*Gasp!* I love that little online store!! Marvelous for those of us who don't need to add yarn debt to the school debt, credit card debt, car debt, house debt...etc...etc....etc....

Anonymous said…
The things your kids do crack me up! Thank them for me.

Now, after reading your post about making tomato sauce I meant to tell you about the wonderful tomato smusher. Instead, it's the subject of my "Love Thursday" post today. www.knitswithcats.blog-city.com

And, because I am scatterbrained, busy, and overwhelmed sometimes, I realized today that I never published the post about your wonderful book. Soon, very soon!
September 5, 2008 at 12:59 AM