Can We Push Christmas Back a Few Weeks?

I'm running a little behind.

My daughter Jane (8) has been sick for roughly, oh, what feels like a YEAR now. Yesterday, we made our third visit to the doctor's office in ten days. First she had a sinus infection. Then she got a stomach bug on top of that, along with a nice five-day fever. She was so sick...she couldn't even eat for five days. She lost weight she didn't have to lose. But she pulled it together to go to school yesterday to perform in her Winter Concert.

About half way through, I shut the camcorder off and made my way to the front to take her offstage and home.

The kid was so miserable, it was PALPABLE. It was awful. It broke my heart.

So we went BACK to the doctor and found out that NOW she has an ear infection. More antibiotics.

Today? I am keeping her home because she needs to eat once an hour.

I'm SO not kidding.

Her stomach has shrunk so much that she can't eat the food she needs and she's operating at a big deficit already, so she's RAVENOUS. I am spending all of my time cooking for her. It would be hilarious but honestly, there's nothing so funny about having a sick child. Nevertheless, for your amusement, it's 2:00 PM and so far today, Jane has eaten:

3 Gabby Specials (Named after Jane's best friend at school, a Gabby Special is a piece of peanut butter toast with the crusts cut off. I tell Jane every single time that toast is ALL CRUST and she should just bite into it but she isn't buying it.)
1 doughnut
Ramen
Farfalle Puglia, leftover from the Italian Restaurant we love
lasagna
pudding

May I just have a moment on a totally different subject, though?

Almost exactly a year ago, I wrote THIS COLUMN about my, um, ISSUES with UPS. Obviously, since Jane has been home sick and I have been housebound for ten solid days, I have done a LOT of shopping on-line. Including buying myself a new area rug for our living room because the one we had before had been dubbed the Sydney Rug of Shame during her incontinent phase and although it had been cleaned within an inch of removing all of the wool and just remaking the darn thing, every time I saw it, I thought about my old dog and how much I missed her.

Today, I had one of my garage doors open while I was unloading some groceries and somehow, in between trips, a UPS truck snuck up my driveway and deposited a very large area rug in the empty bay where my car should go.

I had to pick up this 65-pound rug and haul it out of my garage and up to the front door, up the stairs and into the living room. Using my patented fall-on-my-face, skin-both-knees, moon-the-neighbors dismount, I got the darn thing inside and unrolled. I love it. Our furniture is all rearranged because of the Christmas Tree but you get the basic idea. 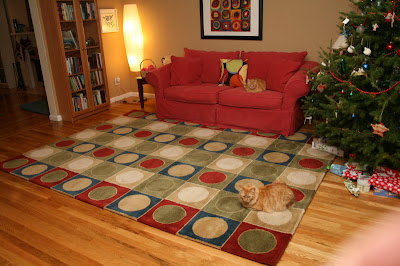 Actually, I shouldn't be crabby with the UPS guys because, dudes, we're having our first real bonafide snowstorm! More about that later --the cry has gone out for another Gabby Special.

Blink-O-Meter: Only one strand still (stubbornly) not blinking, despite my overt threats to cut it into tiny pieces after Christmas.
Email Post
Labels: cats family gratitude Not enough therapy in the WORLD Scout the Glamah of it All The World According to Jane

Ream O Rama said…
How awesome are you? House looks nice (very cool rug BTW), tree up, kid well cared for and snow on the way. Yay Barb! And just to add one more thing for you to do...

Poppy Buxom said…
I love the rug! And thank God someone else out there wants to push Christmas back.

Now excuse me while I order some more gifts with overnight shipping.
December 19, 2008 at 3:46 PM

Karen said…
Hey! The rug matches the artwork on the wall! That is so cool. Where did you order it from - I am in need of a new rug, too.

Barb Matijevich said…
I got it at Overstock.com. It's the third rug I've ordered from there this year and I really have liked them all. (Well, okay, one was sort of a design error but I'm living with it. I could have sent it back.) I think the area rugs at Overstock.com are a really good deal--good quality and really, about half the price.

hokgardner said…
I am so sorry about Jane. We are all sick here, and I've been housebound for what feels like weeks. But nothing as bad as what Jane has been through.

MadMad said…
Oh, I love the rug - it's reminiscent of the old one, but its own thing, too! Perfect! (Despite the UPS adventure. Have you heard the one where the driver "hid" the package in the grill? I don't know what they teach those guys!) Anyway. Happy snow day. Hope Jane is all better soon. (Sounds like she's on her way!)
December 19, 2008 at 7:36 PM

Anonymous said…
The rug looks awesome. I was going to mention the likeness to the artwork, but I see someone beat me to it. I hope Jane is feeling better. This is such a yucky time of year to be sick. We have six inches of snow and counting... So much fun being stuck in the house when there is still so much to be done. And another storm coming Sunday. YAY! I think I'll request a Gabby Special and see if it gets made...
December 19, 2008 at 9:36 PM

Lynn said…
I had to scroll back up the page and look at the artwork. Brilliant planning on your part, or serendipity?

Hope that Hurricane Jane is back on track; when I was pregnant with Secondborn [shortly after the rocks cooled], I picked up a stomach virus. Once the idea of food was no longer revolting, I had that painful sense of being about 10,000 calories behind. Not fun. Hugs to the both of you.
December 20, 2008 at 4:47 AM

Mokihana said…
We have also been housebound by snow. No small kids, however. But livestock to care for, wood to bring in for the woodstove... however, we're almost out of heating oil and no way the oil truck can get up our driveway. The whole Portland, OR, metro area has almost shut down, and an ice storm is due tomorrow.

Hugs to Jane. Hugs to you regarding Sydney.