So, true to the rules of Karma currently operating in my life, after my good mood and determined lassoing of the spirit of the season (Merry Christmas, dang it), I had a really bad day yesterday.

So my husband made me go to a hockey game.

We're still iced in up here on the hill, but my spouse managed to use his four-wheel drive to jump the median between our house and our neighbor's house and drive down THEIR driveway. Because, dudes, that guy has some sort of OBSESSION with plowing his driveway. At all hours of the day and night. With his own snowplow, which he attaches to the front of his big ole truck.

(Dude will barely say hello and he works nights and I'm not implying anything when I say I hear the Sopranos theme song or anything, but it does occur to me that if you have to make a fast getaway, a perfectly ice-free driveway is a must.)

Anyway, my husband managed to get one of our cars down to the bottom of the hill because I had a doctor's appointment. He rode into work with a colleague and I ran errands and walked up and down the hill with various purchases (cat food, wine) until I slipped on some ice and fell on my kiester, banging my elbow hard on the ground and rolling my not-so-bionic surgically rebuilt foot.

But it's okay, because I saved the wine.

Anyway, after that, the whole day took on this pain shimmer, PLUS, are you ready for this? I have a big STY on the eye that sees a spot.

I went to see the doctor, hoping for some magic pill (amphetamine) that would help me regain my Elvis-in-the-fifties physique and energy. I left with a whole new vitamin regime and the grudging recognition that, okay, well, speed didn't work for ELVIS either. (Plus, you know, um, early death.)

Meanwhile, in between falling on my arse outside and making Gabby Specials for one Jane Cooper, who continues to need feeding once an hour like a baby bird, my husband and I were having this whole e-mail exchange about everything we still had to do for Christmas and oh, yeah, he had hockey tickets for the four of us for that night.

I said I wasn't going. I've had almost two straight weeks of my lovely children's company without a break and I wanted to sit in front of the fire and write my Christmas cards.

He promised me unlimited drinks.

I said I was having a pain day and didn't think I could walk to our seats.

He called me Howard Hughes.

I said I hadn't even showered that day.

He said, dude, it's HOCKEY.

By this time he was home and I was in tears because that's how much I SO DID NOT WANT TO GO, WHY DON'T YOU LISTEN TO WHAT I'M TELLING YOU?

Finally, he stood in front of me. "Barb, obviously you don't have to go if you don't want. But sometimes you go to things and you surprise yourself by enjoying them. And it seems to me that if you go tonight and you like it, maybe that will create some sort of...positive energy that will gain momentum and make tomorrow much better."

And then the clincher, "And if you really hate it, think of the marital capital you'll have to beat on me."

Fine, fine, FINE. I changed my clothes and packed my knitting and there we went. To a Hockey Game. On the Eve of Christmas Eve, with presents left to buy and wrap and cards left to send out and...BLOGGING to do.

And then, of course, it was perfectly fine. Nothing I would choose to do AGAIN, mind you, but we had seats about five rows off the ice, reserved parking (which meant VALET parking so I really did have curb service) and I got a LOT of knitting done.

Plus, the New York Islanders' fans were pretty funny, as people-watching goes. They are seriously die-hard, those fans. Everyone was wearing jerseys with "DiPietro" emblazoned on the back. I don't know who that is but he's got some very serious fans. (I'm less impressed with the sportsmanship involved in singing a little ditty that ends with "YOU SUCK!" after each Islander goal. Nice.)

Another thing that was lovely to watch was the large group of orthodox Jews sitting next to us, clearly a large extended family who seemed to be indulging in an annual hockey game ritual. There was a lot of hugging and laughter. (This did necessitate a long and hilarious conversation between Jane and me wherein I exposed my ignorance about the Jewish faith. I did manage to get SOME points across, as evidenced by Jane's full voice exclamation in horror, "NO CHRISTMAS???")

I don't know. I get my lessons in the oddest places. It made me realize that the point of this time of year, whatever you believe in or don't believe in, is spending time together with people you love.

Even if it's at a hockey game on the Eve of Christmas Eve.

Happy Holidays, everyone. May you all be blessed with friends and family or cuddles with orange tabbies. 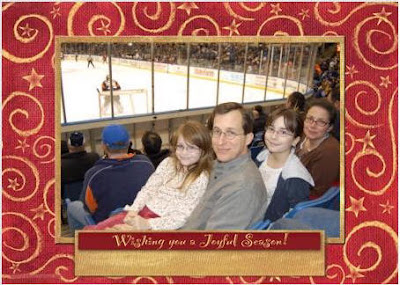 PS: My entire Christmas tree is blinking! VICTORY IS MINE!
Email Post
Labels: Blink-O-Meter family foot gratitude Happily Ever After knitting Marriage Ain't for Sissies the Glamah of it All whine

Mary Ellen said…
I LOVE hockey, so I would have loved that. I'm glad you managed to have a good time.

I read on someone else's blog the best way to explain the theme of pretty much every Jewish holiday: They tried to kill us; we survived; let's eat.

I'm all in favor of that.

I am glad your husband dragged you out and it was tolerable, and the whole image of Ortohdox Jews at an Islanders game made me laugh out loud!!!!

That was my blog ME read the theme of Jewish holidays on, and its so true! But I guess they weren't having the hot dogs, bwahhahhaahaa.
December 24, 2008 at 12:50 PM

Unknown said…
Oh and by the way, I would love an orange tabby snuggle for Christmas...Is Edward willing to travel coach or does he insist on first class?
December 24, 2008 at 12:51 PM

Ann in NJ said…
Don't you hate it when your husband is right? Can't tell you how many things I've not wanted to attend and been dragged to - only to have a pleasant evening.

Glad there was a positive ending, we are struggling today with feeling lousy, lousy weather, and too much left to do.
December 24, 2008 at 12:55 PM

Stefanie said…
I haven't got any orange tabbies (as the many fruitless kidnap attempts on Thomas have indicated...) but I have got two labradors and a chihuahua... does that count?

Merry Christmas, Barb. The biggest pleasures lie in places you really, really, really don't want to drag yourself to. That's what I've learned this year.
December 24, 2008 at 2:21 PM

Miri said…
Okay. I did this with Ryan the other night. A former client's open house party, the children barely over life-threatening illnesses, snowed in for a week and a half... he. made. me. go.

I even said how much MORE it would mean to me if he took the girls so I could have an alone time.

I even (maybe passive agressively?) took a nap when it was time to get ready to go.