I have a bazillion things to tell y'all but this is the first day of NaNoWriMo and my head is swirling with words and plot twists. Both of my daughters have joined me in this insane undertaking and thus far, Ana (11) has finished her word count for the day and almost all of tomorrow's and Jane wrote 500 words on her first book and then changed her mind and wrote another 556 words on her second idea. I'm sitting at about 350 words but I had some stuff to do like exercise and grout my Butler's Pantry counter (FINALLY!) and...um...nap. I am drinking caffeine now, though, so watch my dust.

Anyway, since I am going to be pressed for time over the next month, my posts will be shorter. I am actually SO organized...

(excuse me for a second: BWAHAHAHAHAHA! Oh, wow, that felt good!)

that I have actually planned a series of things I need to tell you about.

Monday: Halloween
Tuesday: Helping out at Jane's School
Wednesday: How Austin Ate the Couch
Thursday: My husband and Me on the Comeback Trail (featuring my personal trainer, Edward.)
Friday: Date Night in New York City

This is not a chronological listing but that's just how loosey-goosey we are around here. 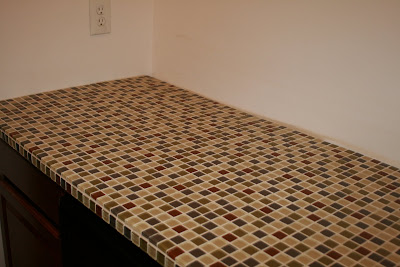 I have decided to add a small backsplash (which I just typed as backLASH--Freud, anyone?) to compensate for the irregularities in the counter itself so the project isn't done yet. Still, considering that we lived with it as a plywood counter for 18 months, this is definitely a step forward.
Email Post

Miri said…
Optimism springs up in me like a confused daffodil in December.

kim said…
I would kill for a Butler's Pantry but would much rather have a butler. Named Jeeves. Who finds my wit annoying but secretly adores me. He would be my conspirator in endless projects that keep Jim reeling. But I digress.... Great job!