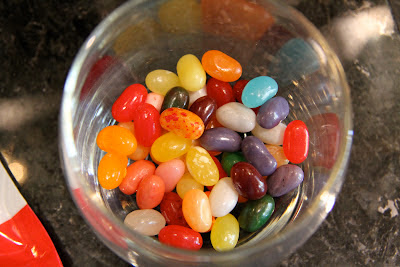 It turns out that Jelly Belly jelly beans are vegan. (Well, they use a little bee's wax to make them shine, but otherwise, they're without any animal product at all.)

This has presented me with something of an issue this week, which I'm not willing to say too much about. (Except, perhaps the purchase of the TWO POUND bag was an error in judgment.)

Anyway, I was snarfing down a handful eating a few when I accidentally ate a black licorice one.

Usually, I go through the (incredibly modest) bag and pull out all of the black ones in advance so I don't accidentally eat one.  I didn't do that this time, daunted, no doubt, by the sheer enormity of the task given such a large bag.

"GAH!" I said and ran to spit the black licorice one out.

"I don't know why they even MAKE these dang licorice ones, " I said to my daughter Katherine.  "Nobody likes those.  They should just leave them out. In fact, they should OUTLAW them!"

Katherine agreed.  "Also, the white ones because they're gross.  And these ones they say are mango, but really taste like Evil."

"And those root beer ones, those are really gross," I said.

I looked at her.

"Of course, there are probably other people who think we should outlaw the cinnamon ones or the orange ones or those cappuccino ones--imagine!--and then all we'd be left with is the cherry ones or something."

"Probably, it's a better idea to just let people choose the flavors they like and NOT CHOOSE the ones they don't like.  Probably, the best idea is just to give people choices, rather than outlawing the ones we don't like just because WE don't like them. I don't AGREE with people who like the black licorice ones, but I can respect the idea that we're all different and we all get to make our own choices."

Kathy Ireland said…
Love the black ones too. Next time, you just package up all those hated black jelly beans and ship 'em north! Lol
August 26, 2012 at 12:30 PM

Carole D. said…
I'm with you on the black ones! Fortunately I always had a sister and mother around who loved them and would pick them out FOR me! Just don't buy the Harry Potter ones - OMG! Now THERE are some flavors you just don't need to have....seriously! Good metaphor though!

Susan said…
I eat the black licorice ones first but I hate, hate, hate the coffee flavored ones!

tanita✿davis said…
I drove past the JB factory today... made myself keep driving.

Tenna Draper said…
They don't always post them as licorice, either. Sometimes, they call them Anise--same thing, different name. Watch out. I don't like them either....

Tiffany said…
Given the metaphor, I hate to say this, but segregation is the answer. There's nothing wrong with black jelly beans except that they don't fit the theme of the rest of the bag. Black licorice ALONE is fine. When it pops unexpectedly into the midst of all those fruity flavors, not so much.
August 27, 2012 at 2:32 PM

Barb Matijevich said…
Nope, I totally disagree. The flavors aren't all fruity--there are 49 flavors in this particular bag and they range from fruit to soda (Dr. Pepper? Really?) to coffee to buttered popcorn to toasted marshmallow. It's a big melting pot of flavors. And there's room for everyone's preferences. I stand by my metaphor --we would all be diminished by the lack of choice.
August 27, 2012 at 2:47 PM

Barb Matijevich said…
Plus, you know, tastes evolve through exposure. I used to hate the coconut ones but I've eaten enough of them accidentally that now I don't mind them. I'm not sure that will happen the the licorice ones for me, but I can hope to become more broad-minded.

(This has the potential to be a part of that New Yorker feature called "Block That Metaphor!" Perhaps I should shut up now.)
August 27, 2012 at 3:04 PM

Kim said…
Just popping over from Women's Colony to say Aloha! Love this post; hilarious. I too, like some of your other commentors love the licorice jelly beans, but only by themselves. The ones I despise are the chocolate pudding flavor; GAG! You know what flavor is really good though? Pear.
August 28, 2012 at 12:36 AM

Anonymous said…
Always and only the licorice-anise ones. The rest of the flavors are just not up to standard.

So you have lots of standing in line waiting for the little bag with all the good ones.

Claudia from Idiot's Kitchen said…
If you decide that the green juicy pear ones don't fit the metaphor, I'd be happy to make the sacrifice and take them off your hands. (also a visiting Derf.)
August 28, 2012 at 12:19 PM

Jenn @ Juggling Life said…
My hubs loves the black licorice and I abhor them.

Bullwinkle said…
Dude says that choice works - except when olives are in his burrito. Then the olive flavor gets into everything ;) and he's got to pull them out and feed them to Sam (who thinks they taste just fine.)