I've been wanting to write about sobriety for a while now, but I haven't done it. It's a hard subject  --it tends to polarize people and I'm not really about that. I like to write about inclusive things.

I'm a firm believer in this: 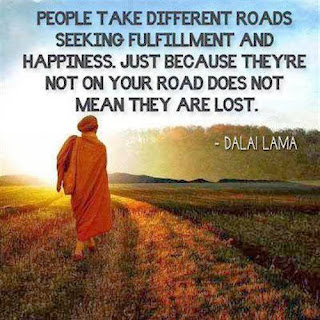 I've never really spoken about getting sober much, but of all the changes I've made, it's possible that this one affected the quality of my life more than any other. It's a hard subject, though, because again, people feel judged when I say I don't drink --as if my very existence as a non-drinker means I'm judging them. Note that I'm not suggesting THEY stop drinking --everyone has to find his or her own path --but people start apologizing to me for their own alcohol consumption. I try to say that people have to live their own truths; this is mine.

So, anyway, I stopped drinking about three years ago. I've detailed before how I was going through a period of time when I made a lot of changes in order to align the way I was living with my value system. One of the those changes was getting sober.

I stopped drinking for a lot of reasons.  For one thing, once I was free of pain, I didn't want anything to take the edge off of my joy. Alcohol is a depressant. I've fought depression on and off for most of my adult life. I've always known that it was a depressant --even when I was drinking and taking anti-depressants.  (Yes.  I did that.)

But at any rate, I stopped wanting anything to tamp down or filter my emotions. It's that whole thing that we've talked about before: you can't selectively numb your emotions. I didn't want to live anesthetized in any way. Even if it means that I have to feel the lows, I don't want to miss out on any part of the highs.

I used to think I had to be drinking to be any fun.  Because I'm shy, I bought into the whole idea of alcohol as social lubrication.  In my case, though, I just FELT more uninhibited --but I wasn't more witty or gregarious.  I know this because I have spent a lot of time now as the only sober person in a room full of drinkers and y'all, NO ONE is more fun when they are drinking.  It's an illusion. Alcohol just magnifies who a person already is. If a person is fun when they're not drinking, they're fun when they're drinking.  And if a person is NOT fun sober, chances are that they are obnoxious when drunk.

It's taken me a long time to work through the issues I have associated with drinking. I think I thought that because giving up drinking was so easy for me, it meant I didn't have a dependence on alcohol. But it wasn't always that way. I had tried to give up drinking before, and with the exception of pregnancy, I'd never been successful. I may not have had a physical dependency of alcohol, but that habit was deeply ingrained. And I had other issues --I felt awful most mornings, I had migraine headaches, my depressions were worse, I was bloated and unhappy --that I can relate directly back to drinking.  Not to mention that every bad decision I've ever made in my life can pretty much be traced back to alcohol.

I feel like getting sober was one of the best things I did for my quality of life and my mental health. That's not to say it's a universal truism --I'm sure a lot of people can use alcohol moderately and remain happy and engaged in their lives.  That's not the case for me --moderation is not what I do best.

If you're wondering about the role of alcohol in your own life, try giving it up for a month.  It doesn't have to be a major event --you can say you're doing it for health reasons --and just see how it feels. Do you feel better or worse or the same? Is it hard? Do you feel like you're thinking about it all the time, taking up valuable bandwidth in your brain that you could be using for creative endeavors? At the end of the month, you'll know whether or not alcohol is an issue for you.  And then you can take steps to deal with it, or not.

I also feel that I want to model a different choice for my daughters. We've moved back to Texas, which is a hard drinking culture.  I want them to know that they have a choice in that regard. Studies say that the earlier an adolescent begins drinking, the more likely it is that he or she will be unable to enjoy themselves without drinking later in life.  I know from watching the people around me that this is true. And my girls have alcoholism on both sides of their family --I want them to know they run a higher risk of having issues with alcohol, but that they are in control of what they put in their bodies. I feel so strongly about giving them all the information they need so that they can make conscious, mindful decisions for themselves.

I guess that's what it all comes down to for me.  Being mindful. Being present. Cultivating awareness of why I do the things I do and whether or not that increases my joy. What choices have you made that increased your joy?
Email Post

Sarah said…
(((HUGS))), Barb.
I've never ever been a drinker, partly because I saw my mom drinking all the time, and she was depressed all the time, and it was apparent* to me that alcohol made one depressed, and I could never imagine wanting to be depressed. But you explain some things I hadn't realized, like the "others feel judged" thing. Thank you.
November 9, 2013 at 10:42 AM

tanita✿davis said…
...yeah, I never realized just HOW polarizing the whole thing could be until college. I was an offense just standing around, breathing. And, I didn't know how to explain - as beautifully and succinctly as you did just here - that I couldn't add more chaos to a life that was struggling so hard to be happy.