We Are Saved Only By Love 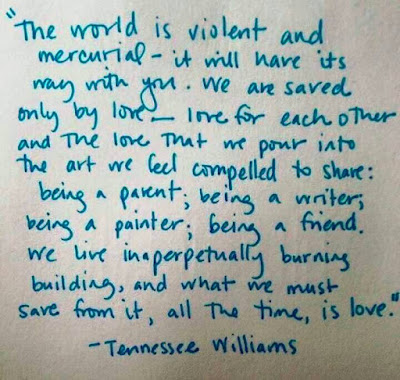 My kitty Edward, who has been one of the larger than life characters on this blog for its entirety, went into decline at the end of March. He stopped eating much of anything and lost so much weight that he seemed just literally skin and bones. I think at the end his bones were hurting his skin FROM THE INSIDE. I took him to our vet and they couldn't find anything wrong with him without a whole host of invasive tests and I just...I just couldn't do that to him. I still feel terrible about putting Scout through the surgeries at the end of his life. I knew Scout was dying, but the vets we were using convinced us that it might be worth it and that we could have as much as another year with him and he'd have a good quality of life. It's just so hard to know the right thing to do with our pets, you know? I've learned that I need to trust my instincts. Edward was 13 and medically fragile for most of his life; he wasn't going to get better.

So, I promised Edward that I wouldn't let him suffer and I honestly believe he wasn't suffering until the last day when I instinctively knew he was. Last Monday, I came to the heartbreaking conclusion that it was time to let him go.

Anyone who has ever had to reach that conclusion, and I think it's just about every pet owner out there, knows the pain of that decision. And probably also knows the anguished resolve not ever to set ourselves up for that kind of pain again.

Right as I was ready to resolve not ever to love anything EVER EVER AGAIN, a friend posted this quote by Tennesee Williams:


"The world is violent and mercurial -- it will have its way with you. We are saved only by love --love for each other and the love that we pour into the art we feel compelled to share: being a parent; being a writer; being a painter; being a friend. We live in a perpetually burning building, and what we must save from it, all the time, is love."

Which pretty much sums up everything I know to be true.

In a weird way, I think Edward was just hanging on to see me through this cancer business. Right up until his last day, he slept on my pillow at night and curled up inside the curve of my body at nap time. His purr was still there, albeit diminished.

I miss him so much, but I am glad he's free of pain now.

The hard thing is trying to make sense of this loss within the context of all of the other losses of the last 18 months. The catastrophic illness of my older child and her fledging to college in California after her recovery, the heartbreaking and unnecessarily ugly ending of my 20 year marriage, the loss of my yoga studio and practice and my dogs, the emotional fallout of the divorce on my younger daughter, the breast cancer diagnosis and subsequent surgeries and the impending course of radiation...and then Edward.  I alternate between some kind of Job-like anguish and this feeling that maybe everything I've built over the last 20 years has to burn away in order for me to become what I'm meant to become. Truly, it depends on when you catch me as to whether I feel like I've re-entered the atmosphere with everything nonessential stripped away, or if I feel like God's whipping post.

Mostly the former, I think. When all is said and done, I remain a hopeful person. I just seem to be wired that way.

There is no greater act of hope I can think of than making the commitment to another four-legged friend. It's not a commitment I take lightly --I believe it's for life, no matter the particular idiosyncracies of either party. (See: Scout. If you're new to the blog you might want to search for the Scout stories. They're hilarious.) My daughter Jane and I are going to begin the search for another furry roommate next week. I have a lot of love to give, and I don't want to live alone without something that loves me back unconditionally. (Jane is 16 and doesn't always fit that category.) 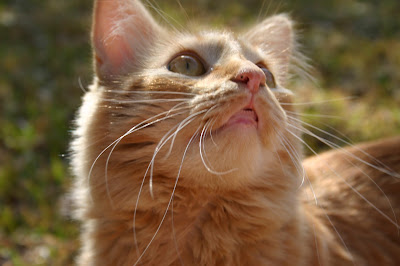 Rest in peace, Edward. Thanks for loving me through this hard year and for providing so much comic relief. I'll miss you.
Email Post
Labels: Barb v52.0 cats Edward heartbreak Not enough therapy in the WORLD Operation Living Out Loud perspective

Anonymous said…
Barb,
When I got separated and divorced, about ten years ago now, I had this recurring dream of floating in the air ... not just me but me and my stuff...tethered to the ground by only one or two remaining threads. There used to be many that kept me solidly in the same place, but one by one they had gone.

Like you, I had a number of losses, including the rabbit and the cat dying within a few months of my discovering "her" existence, and of him moving out. I also lost the primary contract I had in my own business...they cancelled all external contractors. My daughter left for college half a year before all this started, and my son left about a year afterward. There was nothing grounding me, not here, not anywhere.

I felt that way for a long time.

I eventually realized there was no reason I couldn't just pick up and move. I had a house, yes, but houses can be sold. So I moved to a whole new city for a job. Temporarily, I told myself: 6-12 months to get to know the research staff, and then I'd be back, working out of their "remote" location.

It was actually awful. My new town, though very courteous, consists of a large number of generations-deep families that aren't looking for a single older woman to add to their friends list. I had a long-term and not-moving relationship that I figured would move one way or the other when it became long distance. (First it moved to being engaged; 3 years later it fell apart).

I am, however, much happier now. As you probably know, I got married last weekend, after a year with my now-husband, who actually moved in with me a few weeks after we met. He's delightful and loves me and needs the parts of me that I have been ashamed of in the past (e.g. my neediness).

I am as sure as an outsider can be that your new reality will be much much better than your current or past realities. You will always have your girls, in a different role. You will not accept any new realities unless they are better for you than being alone, and I expect you'll learn to rock this "alone" thing eventually. When you do find something delicious, you can savor it as fast or as slowly as you like. May the rest of your life be all about being who you need to become.

Ellen said…
I am so sorry for your loss. Edward was much loved and you were both very lucky. Didn't he have a grand adventure a few years ago? He came back to you then- surely he was meant to be with you through this, as you said. Don't feel rushed. You'll open your hearts and home to the perfect new, possibly slightly damaged furry friend when it feels right!
June 20, 2017 at 4:19 PM

ccr in MA said…
I am so sorry about Edward. I too had a moment when I knew it was time with my cat, and although there was peace in that knowledge, it was still incredibly hard. Thinking of you.
June 20, 2017 at 4:35 PM

tanita✿davis said…
It takes bravery and grace to allow and animal to go when it's time.
May Edward's memory be a blessing, and may you someday look back and this and see just how much. ♥
June 20, 2017 at 10:52 PM

Karen (formerly kcinnova) said…
Your loss of Edward brought me to tears. Your heart is so very big, so generous... this new hope for life for a new furry friend brings fresh tears.
The pastor at church on Sunday quoted the Talmud:
“Do not be daunted by the enormity of the world’s grief.
Do justly, now.
Love mercy, now.
Walk humbly, now.
You are not obligated to complete the work, but neither are you free to abandon it.”

You are proving yourself undaunted by this world's grief. I can only hope I am as gracious in loss when my own Cleopatra and Moses come to the end of their lives. We are saved by love, yes, and we are saved by beauty* too. Love is beautiful.

Ann in NJ said…
Our pets are so much more than just pets - they love unconditionally even when we feel our least loveable selves. I'm so sorry for your loss of Edward amongst all the upheaval of your current time, but it is heartening that you are looking towards the future by looking for another furry friend. Best of luck and health to you and your daughters (and your pets!)
June 22, 2017 at 4:53 PM