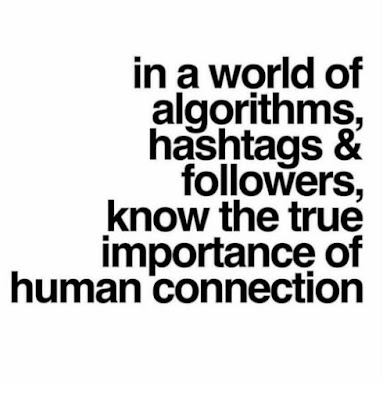 I am so grateful to those of you still reading my blog and commenting on it. THANK YOU. I had no idea if anyone was still following me at all, and it's just lovely to see your names again. I am not even sure how my blog is getting out there since Feedburner used to manage my subscriptions but apparently sent an email in 2021 saying they weren't going to do that anymore and I not only missed that notice but can't figure out what to do to replace that function. Anyway, thank you for still reading. It's weird to think of how long I've known so many of you --time is such a trickster, especially right now in the Time of Covid.
I've been thinking a lot about the ties that connect people and how we get invested in each other's stories, and I feel really blessed to have stumbled into this particular tribe of people. You are important to me.

I decided that in 2022, I want to be very intentional about my social interaction online. I've had a really uneasy relationship with social media for a while now, fueled by how much distress I see about it in my younger clients. It's so good at giving the illusion of connection but true connection doesn't happen when we're exchanging photoshopped versions of ourselves, apparently living our best lives. Connection happens when we genuinely engage with each other without artifice, face-to-face, attuning to the energy between us. Laughing together. Crying together.

I think the way we use social media right now looks a lot like middle school popularity politics. How many of us still carry the scars on our psyche from things that happened during those years in our lives? I don't have a single client who remembers those years fondly. I certainly don't. But back in middle school, I didn't have the adult perspective to know how rare it is to find deep connection, and I tended to think of friendship as an infinite resource.

I know not everyone is like that. I see people who have had friends since grade school. Part of what fed my own social interactions at the time was the legacy of being an Army brat --get in, make friends fast, leave. Back in those days, we had to pay for long distance calls and I could never keep up with my pen pals. I still wonder what happened to the friends I made back then.

So, it's weird (hypocritical?) to be so grateful for the connections I've made here on my blog, and still so wary of the way social media is narrowing our interactions to sound bytes and flattering images. Maybe they are really just shades of the same thing. Since the omicron variant has been active, I've been seeing more of my clients via teletherapy and I notice that it's twice as hard to do the work that way, but it's still effective. Maybe the answer, as in every other issue, is a balance of the two.

That said, I'm still getting off of anything run by Facebook/Meta. I don't want to participate in that empire any longer. 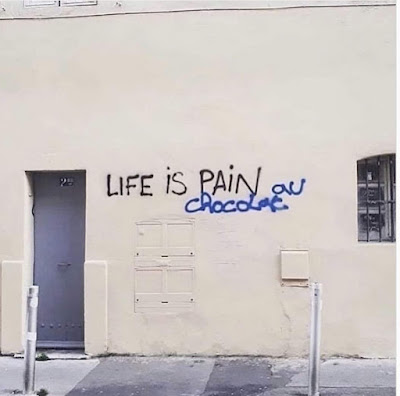 Yesterday, I felt the unmistakable beginnings of a pain flare, and sure enough, this morning, my pain was pretty loud. My joints feel like there are little trolls in them, pushing the bones apart with all their might.

I was telling my partner that I could feel it coming and that it was really hard not to go into a dark spiral preemptively. Things have been getting better lately --I've had more good days than bad. Not one of the meds I have tried has proven effective but some of the lifestyle changes seem to be paying off, particularly not drinking alcohol. But it's always a work in progress to head off the catastrophic thinking and depression that are borne out of my experiences with chronic pain.

I try not to go there because that just takes me out of the actual suffering and borrows extra suffering from a different time. The brain has a bias for the negative. If you think about it, it was the human who ran away from the bear whose genes survived. The one who thought, "aw, how cute" got eaten.

So, today has been a struggle, and I am resisting the urge to get all, "but it's not as bad as it could be! I'm fine!" Chronic illness is soul-sucking and I don't want toxic positivity to rob people of sharing their lived experiences in this space. There's way too much of that in our world right now, and it's really painful for people who are struggling with any sort of chronic condition, be it mental or physical. It's enough to have to deal with the actual illness and pain, without also having to deal with some shame, as if being sick was a moral failing.

We are complicated beings. We can accept the reality of our illnesses and experience the grief around them while at the same time holding onto hope for some relief. One does not cancel out the other. Naming pain for what it is is not the same as admitting defeat.

Sheri B said…
Barb, I’m so glad you restarted your blog and have really appreciated reading your thoughts. I’ve missed you since you left NY.

After reading today’s post, I started thinking about some things that have helped one of my people who has been battling anxiety and depression over the last few years. Two things in particular seem to carry her through. One is that it is ok to feel whatever you feel and sometimes the goal isn’t to feel better, it’s just to try not to make things worse. The other is that everything is temporary, both good and bad times will pass and change, so just remember that you have a 100% record of getting through the difficult times.

Sending you love and whatever else you need to get through this round. Looking forward to reading your words again soon. Xo
January 11, 2022 at 7:38 AM

ccr in MA said…
I'm so grateful for feed readers, for just this reason! I'm sure many of the blogs in my Feedly are inactive, but by golly, if anyone brings theirs back, Feedly lets me know, and yay for that.

I'm sorry about your pain. Managing that, and not letting it take complete control, must be very hard. Gentle hugs to you.
January 11, 2022 at 10:11 AM

Laura WV said…
Morning friend! I've been reading your pieces since the mid 2000s and they have always brought me either a weepy comfort or a chuckle or both. I've loved that you've always been willing to articulate your joys and fears with us. It has meant a lot to me especially since our lives have had very similar trajectories (mid 50s, 2 wonderful girls who are growing up to carve their independent path in adulthood,, yoga teacher training graduates who are struggling with a personal practice, I walked away from FB over 3 years ago and although I do miss out on many community announcements etc, it has brought me much greater emotional peace).

Your phrases have often given me language to articulate an inner discomfort for which I had no words. So thank you friend. I was also struck by how your thoughts about the balance of emotions resonated with what I was recently reading by Padraig O Tuama - so I'm sharing those here if that's OK.
"There was a Polish rabbi in the 19th century, Rabbi Simcha Bunim, who urged his followers to write The world was created for me on one piece of paper and keep it in their pocket. He suggested they should place a different piece of paper in the opposite pocket, with I am but dust and ashes written on it. This, he proposed, is a necessary tension. Sometimes I think of what else I could write on pieces of paper, things to remind me of the human condition: I am capable of kindness on one piece of paper and I am capable of cruelty on another. There is only strength in community on one piece of paper and I must learn to be alone on the other. Carry my joy on my left / Carry my pain on my right is how Björk put it. This is not about finding a balance, but rather knowing how to hold ourselves in tension. Praise can cover over the failures of human nature, and sole awareness of the failures of human nature can plunder the heart of hope. We need both, held tight. One in each pocket."
January 12, 2022 at 8:25 AM

Becky M said…
I love that you restarted your blog! I get an email when it’s posted. You’re absolutely right about social media becoming a middle school standoff nasty battle. It’s shocking how ugly humans beings can be behind a keyboard AND in person.
Chronic illnesses and chronic pain ARE soul sucking entities. We struggle to appear “normal” but being honest is critically important. We have to speak our truth. The world wants normalcy, “we’re fine!” “Nothing to see here!” But that’s not reality. It’s certainly not OUR reality. We all need to keep speaking up. Keep writing. Keep shouting the facts. And avoid toxic things. Those might be different for each of us. People, places, foods, drinks, activities. Whatever keeps us running as our best/lowest pain selves.
I’m glad you’re back. It’s always good to read what’s happening for you because I relate to so much of your experience.
Take care, stay safe, wishing you low/no pain days,
painintheBECK
January 12, 2022 at 2:29 PM

Becky M said…
P.s. I had a stroke on Christmas Eve and my typing/grammar is awful. If there are typos or nonsense areas in my comment, please disregard. Thanks!
January 12, 2022 at 2:30 PM

It is really nice to read your posts and also the lovely comments that your readers post. All of them strike a chord within me.

Thank you for sharing.