I woke up and discovered that I was filled with the spirit of the holidays.

I don't know what got into me but I just suddenly WAS.

Granted, my children were still sleeping and had yet to begin the Marathon Whining of the Housebound.

And granted, I was still in my pajamas. (Actually, I'm in my husband's pajamas. He's out of town and for some reason, when he goes out of town, I like to sleep in his pajamas. Is that weird?) (I mean, you do that, too, right?) (Don't answer.)

And granted, I had just taken my first sip of my first cup of coffee and it was PERFECT.

And granted, there is what looks like snow still on the ground. 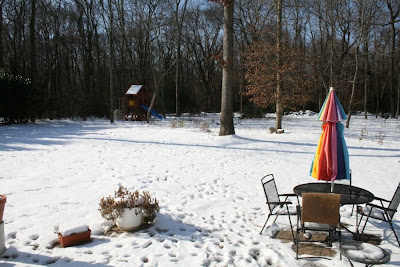 (It warmed up enough for everything to start melting yesterday but then froze hard last night so the white stuff only LOOKS like snow. I got the first real laugh of the day when I let my cow-dog Scout outside and he did his traditional galloping all around the perimeter of the ranch, only he couldn't get any traction so he looked like he had six hundred legs. Apparently, this is the stuff that amuses me a LOT. Also, then he came in and rubbed like a mad man all over the new carpet in the music room. Except it's NEW and really shedding still, so he'd roll over twice and then gag a little on the fuzz and then he'd roll around and do those contented moans and then...gag a little on the fuzz...)

But back to my good mood: Granted, I am completely caught up with my laundry. It turns out that if you want to warm/dry your children's snowy clothes, gloves, hats, coats and shoes on top of the dryer, you get caught up on all of your laundry in a hurry. Who knew?

(Despite a plethora of clean clothes, this is what Jane decided to wear today. I thought it was about the cutest thing ever, being as how we weren't leaving the house and no one would think I had dressed her like that on purpose and was some sort of Madonna-In-The-80's Freak. 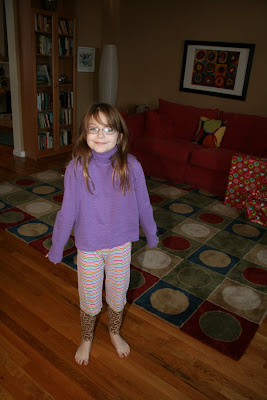 )
And granted, my husband gets back in town tonight after six long days away.

But all of a sudden, I was filled with Christmas spirit. I'm was as excited as Jane, and dudes, that is saying something.

I decided to bake some Christmas cookies because it didn't look like we'd be getting the car down the driveway TODAY either, what with it being covered with ice. (I took my husband's four-wheel-drive truck out yesterday and went to the grocery store and on the way BACK up the driveway, I hit a patch of ice and accidentally trenched the median flower garden between our house and our neighbor's house. Do you think they'll notice?) (I HAD to go--we were out of bread for Gabby Specials and oh-my-dear-holy-buckets, I did not want to break that news to one Jane Cooper. Not when she'd already eaten SIX of them that day.)

Anyway, I called my mom for the spritz cookie recipe from her great grandmother, as I do every year because I can never seem to write it down. She e-mailed it to me. (I would share it with you but I'm afraid my family will rise up and kill me.) It had the German measurements, which means it's metric, right? Only, see, the Germans seem to have successfully managed to meld the English system with the Metric system. Like, they have pounds. And the recipe called for one pound of flour so I measured out 1000 grams of flour which looked like an awful lot. I added it to my dough and my dough turned into, well, sand.

In response, I thought a very UN-Christmas-like word.

But okay then, I'll just double the recipe, thought I.

So, then the batter was still kind of dry so I cut in another stick of butter. It was still too dry to do real spritz cookies but I used the cookie press to do some shapes. 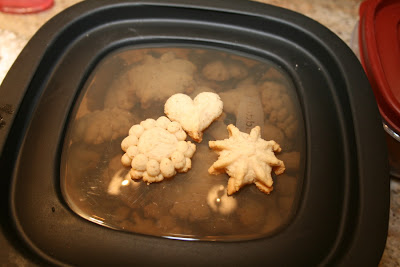 DK said…
But I bet they're yummy.

Suburban Correspondent said…
I get you on the husband's pj's thing. I do that with my husband's T-shirts.

hokgardner said…
If I can get my kids to stop throwing up long enough for me to get anything done, we'll be making cookie-press cookies, too.

Barb Matijevich said…
Kit--it's a German recipe so it's a German pound, which is half of a Kilogram. Very confusing, I know. I actually like German pounds because when I weigh myself, I look like I've lost weight! --Barb
December 23, 2008 at 7:50 AM

Mama Ava said…
This happens all the time to me, living overseas. I go to a 'do, love the food, ask for the recipe, and it turns out I need a bathroom scale or something to figure out the recipe.

There are, I have found, conversion sites online, so I just run the recipe through there and presto! Good food.

Mary Ellen said…
I would never figure out how to measure using metric - I'm impressed that you did it.

I'm also glad I'm not the only one who laughs at dogs/cats with traction issues (one of my ongoing favorite amusements).
December 23, 2008 at 11:23 AM

Unknown said…
yay, Barb is feeling festive! I was just thinking about you last night and all the crap you have had to deal with this year and hoping you would have a nice holiday.
December 23, 2008 at 12:37 PM