Happy New Year--No Really, I Mean It This Time 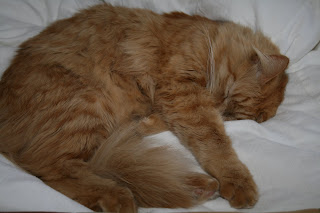 January 4th, 2009
So, all-righty then, here we finally are on New Year's Eve in Barb's Parallel Universe, where pesky little details like the beginning of the New Year often happen about five days later than a more traditional calendar would allow. (Hey, it's my universe and I'll defy the laws of the normal space/time continuum if I want to.) 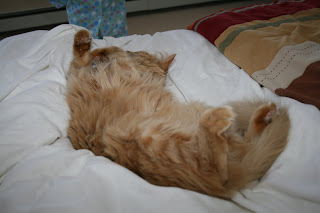 I spent yesterday and today reading through my blog from LAST January all the way through the year. It was a good exercise because I'd been beating myself up over being so useless and immobile last year and the REALITY is that, while I was more immobile than I'm USED to being, dudes, we did a LOT.
We packed up our house and put it on the market. We loaded all of our belongings and all of our pets up and we moved across the country from Texas to New York. We unpacked (mostly) and we lost our Edward for six weeks, only to find him again due to the miracle of a microchip, some good people, and our own determination to keep looking. The girls started school up here, we planted a garden, we went to the beach every chance we got and we did some serious exploring of our new land. I think we've seen more of Long Island than a lot people who were born and raised here!
We hosted a lot of house guests, even though I sort of feel like our house is only just now beginning to be more hospitable. Partly that's because we didn't have a lot of money to throw at some basic creature comforts until our house in Austin sold. (Now we're planning our basement renovation and I'm calling the electrician about installing some heat lamps in the bathrooms, etc. I'm beginning to dream of tiling the kitchen backsplash and installing some more storage cabinets...it always takes me a long time to dream things into fruition. But anyway, I digress.)
We returned to Texas for a whirlwind tour in the hottest part of the summer and our Texas friends turned out in number to say, "howdy." Which was, um, both heartbreaking and really reassuring that distance can't dim friendship. I knitted some stuff. I found a group of knitters up here who became my friends so I hit one of their cars, due I think, to this weird eye thing I've got going, for which I had to have a SHOT IN MY EYE.

We explored Manhattan as only the parents of two girls can do--by finding the American Girl Store and the M&M Store and going to see Shrek the Musical. And also, my husband took the girls to museums and to the Bronx Zoo. We visited friends in the Hamptons and out in Montauk. We picked pumpkins and cut down our Christmas tree and found the nearest apple orchard and we went ice skating. (Well, the kids and Coop did. I found that watching the girls skate allows for some good knitting time.) We had some parties.

We ate a LOT of New York pizza.

We experienced being snowed in, and sledding and the loss of our old dog Sydney. 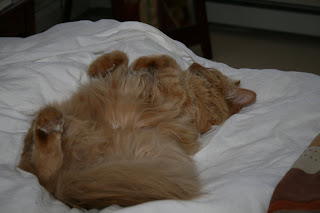 We've had two basement floods (neither one devastating) and a lot of trips to the pediatrician. Jane turned eight and became the most prolific writer in this household. Ana grew taller and taller, now wears the same size shoe I do and her own admirable style. We canned our own tomato sauce, made from tomatoes from our own garden. I ate roughly eighty tomato sandwiches. My husband ran and biked many miles.

I spent today in bed (I hab a code) with one orange kitty who is possibly the greatest miracle of last year, thinking about the blessings of 2008. Then I ushered it out of the door, glad to see it go. Tomorrow brings new resolutions to enact and a new/old me to discover in 2009.

I don't think I would have survived 2008 without you guys. Thanks for sticking around and for your unwavering support. I'll be drinking a little toast to you all tonight. 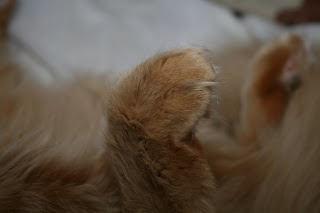 (I'm still figuring out how to do things on my new computer and so these pictures are all HUGE. But then again, they ARE of Edward so I figured y'all might not mind.)

Anyway, I was saying, this may have been my favorite post this year because it was so Edwardy. And you know Edward's toes. Sigh.
January 4, 2009 at 9:02 PM

Mary Ellen said…
Your kitty is a fluffy delight - the bigger the better!

What an amazing 2008 you had - you accomplished a lot!

Marion Gropen said…
I just LOVE big fluffy kitty feet. And fluffy kitty bellies. Clearly, Edward is a cat to be treasured for those reasons among all the others.
January 5, 2009 at 9:50 AM

LaDonna said…
LOL! I read the whole post just dying to get to the comments so I could see what Ei had to say about Edward's toes. Ei, you didn't disappoint, sweetie!

And Barb, you sure did accomplish a great deal in 2008. No need to think yourself immobile or usless ever again. If you can accomplish all that in one year and still be sane, girl, you're da bomb!
January 5, 2009 at 12:08 PM

Anonymous said…
Sounds like you had a good, full year!

Mokihana said…
I adored all the Edward photos. And yes, his toes. But mostly the miracle of getting him back.

Barb Matijevich said…
Robin --my links didn't work in this post. I'm doing something wrong on this Mac. Only one of my pictures opened up in a new window, either. Thank goodness I'm on too much cold medicine to care.

Anyway, "Courtesy Stripes" are the stripes left by my house cleaners. I detailed them in this post: http://sothethingisblog.blogspot.com/2008/06/it-was-beautiful-beautiful-20-minutes.html
which you may have to copy and paste into a browser window because I simply can't do anything right on this computer today. Sigh.
January 5, 2009 at 8:37 PM

Ann in NJ said…
Don't they say moving is up there as one of the top five stressors? Like just behind losing a loved one and marriage (not that those are the same KIND of stress)?

Congrats on surviving the year, and yes, I felt as though my new year started the day the kids went back to school too.
January 6, 2009 at 10:33 AM

Tiny Tyrant said…
We will never mind any of the pics you post, especially of the fur babies. :-)