It's Tuesday and I'm Fragmented

I'm not going to push my fragments into the corner until Friday if they really want to come out on Tuesday. I might sprain something.

Okay, so there's a good chance that when the puppy has been chasing Scout around the yard and I let him in that he will drink a lot of water very quickly, rush over to see me and vomit on my shoe. Don't ask me how I know this. (But I've ordered new shoes.)

Three days of sunshine and counting. The gratitude I feel is almost indescribable. I never realized how much my mood and mental health depend on a regular dose of sunshine.

Thanks to my friend Sherry, who is a recent Austin ex-pat, I found a new blogger called the Homesick Texan. It's SUCH a good blog and so well-written and it's ALL ABOUT THE TEX-MEX, BABY! I don't mind linking and coding for this woman because she got Sherry all excited about making tortillas and Sherry has been bringing me some when she comes over. I rarely ever get to actually eat one (my kids are like a pack of jackals when they see the tortillas coming) but Sherry says she got the recipe from the Homesick Texan so I plan to try to make my own. Feel free to have a moment of reverence for the almighty tortilla.

Every time I want to complain about the ginormous move from Texas to New York and how ha-a-aaard it was, I think about Sherry and I shut the heck up. Yes, Sherry, too, had to sell her house while her husband was commuting to New York. Sherry had a child to worry about (and said child is a teenager and thus not quite as adaptive as the younger set) and once her house sold, she had to move to an apartment while her daughter finished the school year.

And she did it while battling breast cancer. Successfully.

I knitted her some socks (my universal response to life-threatening situations) and when I give them to her, I'll make her model them for the blog. They are beautiful, for a beautiful, and strong as all heck, person.

While my friend Kathy and I were in in Niagara Falls, we took the kids to a water park. An indoor water park, the likes of which I've never seen. 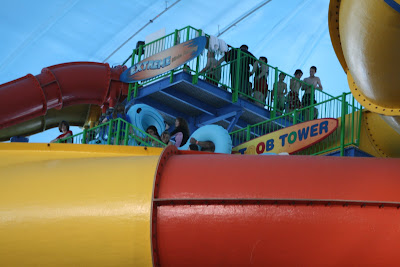 I actually put on a swimming suit and rode the tubes down two of the rides but then I was kind of sidelined because I had to walk up the equivalent of five flights of stairs barefoot and my FULF was not very happy. So I sat there, people watching (the place was like a sauna and there was no way to knit) and I noticed something.

The men, regardless of their size, shape, level of fitness or BACK HAIR (ewww), were all just happy to be splashing about. The WOMEN, on the other hand, seemed to fall into two groups: Those Who Were Toned or relatively toned and were wearing two piece bathing suits and standing around very self consciously, sucking in and adjusting their bathing suit bottoms, and Women Who Had Given Up. The latter group was dressed in one-piece bathing suits (usually black) and were chasing around packs of kids, regardless of their size or fitness. But they could be heard to complain about how fat they were and how embarrassed they were to be out in bathing suits. This group, however, was not sucking in.

[Obviously, these are gross stereotypes. I, for example, look like I'm in the Women Who Have Given Up category (Jane was looking for me at one point and she said, "Do you have any idea how many moms there are here who are wearing black swimsuits?") but I was still self conscious and sucking in.]

(Are you guys noting how not only are my digressions becoming increasingly parenthetical but now I'm even using different forms of brackets to denote different levels of random thought?) (Because I rule, that's why.) (Or maybe because I have way too much time on my hands.)

Anyway, it occurred to me how sad it was that we women can't ever just be happy in our bodies. An ENTIRE GENDER feels like crap about itself physically. Even the women who have earned the right to feel great about themselves through exercise and diet aren't happy --I know this because when I think of how I thought I was soooo unattractive when I weighed 125 pounds of solid muscle and how miserable I was, it makes me want to throttle me.

Surely there is something we can do so that our daughters don't inherit this total schizophrenic perfectionistic mindset? I'll be darned if I know what, though.

Today, I saw a pink Mary Kay Cadillac with an Obama sticker on it. It was a totally euphoric experience in cognitive dissonance.

Why, YES, it is possible to make yourself incredibly sore just from decluttering. What?

No, seriously, I am so sore it would make you laugh. I think it's from doing what are basically squats from floor to standing for two straight days. Why, hello there, hamstring muscles! But y'all, look at the incredible job the girls' did on their rooms. I think it would have helped if I had "before" pictures but given the amount of stairs I traversed in order to take boxes of clutter and paper and recycling out of their rooms, going back down for the camera had to wait until today! Above is Jane's room. Jane (8) gets extra points for NOT filling any boxes to take to the basement. I don't know if you all have noticed but she's fairly DECISIVE about things and she could say "Stay" or "Go" and not think about it again.

My lovely Ana, 11, who has the Clutter Gene, filled about six boxes of stuff she wasn't QUITE ready to part with completely and we stashed them in the basement. Still, it's a huge effort and I am so proud of her--I know that it's not easy. Here's her room: 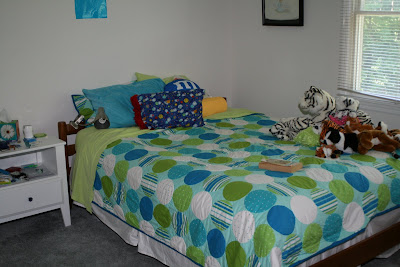 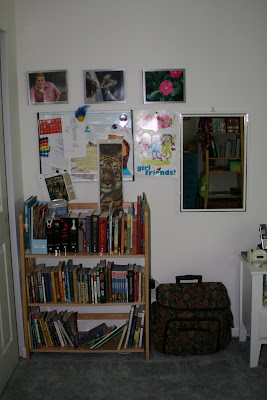 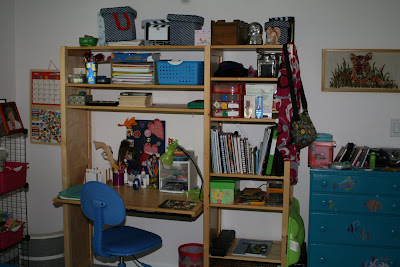 The girls have inspired me to continue my own decluttering efforts. Just seeing how much happier they are in their rooms when things are neat and orderly makes me want to get my whole house in that state. If I keep this up, though, I'm just warning you that there is no way I will be able to get off the couch and answer the phone before the 37th ring. Wow, I'm sore!

This puppy is NOT broken nor deceased. Just sleepy. 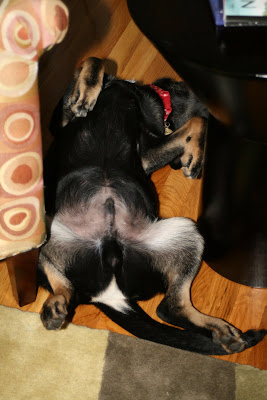 It did occur to me the other day that Austin will never learn his name at the rate we're going because none us calls him anything but "Puppy!"
Email Post
Labels: A picture is Worth at Least Ten Words Austin foot OCD? Not me. Oh the DRAMA summer Sunshine Texas Meets New York The Great Cooper Move The World According to Jane vomit

Unknown said…
way to go on the decluttering!!!

Mary Ellen said…
I like fragmented posts, regardless of the day. I was especially impressed by your use of parentheses and brackets!
June 30, 2009 at 1:06 PM

Suburban Correspondent said…
Really, you cannot even begin to understand the difference between men and women until you realize that men never, ever "feel fat."
June 30, 2009 at 1:41 PM

hokgardner said…
The decluttering looks wonderful. Will you come here and do my house?

I still call my 5-year old standard poodle "Puppy" - he comes to that, or his name, which he did eventually learn, too.

Susan said…
I have tried and tried to find a not back bathing suit - but in the plus size range there is no such thing unless it is a HUGE floral pattern.

Sarah said…
1. I want me a tortilla.
2. The bathing suit quandary just sucks! For me (I will speak of just lil' ol' me), when I put on a bathing suit I wince at my reflection. I get out in the water and I lose my cares and worries until... a) I catch my reflection again b) I see someone with the body that I used to have and, as far as I'm concerned, should still have - minus perky boobs and smooth tummy of course. Conclusion - bathing suit season is both a blessing and a curse: the warmth makes me feel sunny, the clothes make me feel OLD.
3. When I was, oh say 8, a dog jumped in our car one day while my Mom was waiting for my sister at ballet. She drove the dog home and we called it Puppy. For weeks we place and ad, but no one claimed the dog. We decided we were keeping the animal and so we should name her. We named her Holly. It didn't take. She lived and died with the name Puppy!
4. I like your fragmented thoughts. Quite a bit actually!!
July 1, 2009 at 6:38 AM

Miri said…
The first thing I noticed was the advanced use of parentheses and brackets. Then I noticed the rooms... looking smashing. Then I read the post and had to laugh, shake my head, sigh at the black bathing suit comment from Jane. Katie and I were JUST discussing this mom phenomenon at the lake yesterday. While sucking it in I might add. (And by that I mean our tummies, not lake water.)
July 1, 2009 at 7:16 PM

Jen said…
I have been reading about your de-cluttering with great gutloads of jealousy. My entire house is cluttered. Every surface. And I am really, finally, totally ready to get rid of it. But my kids are 5, 3 and 9 months. And we don't have a basement or an attic to store stuff. And it's oh so ugly around here. So I have been living vicariously through you. Just thought I'd let you know! Keep up the good work.
July 1, 2009 at 8:28 PM

Sherry Sea from Austin said…
Thanks so much for the high praise, Barb. It was the year from hell, but all the usual suspects got me through it, mainly friends like you.

I, too, drooled over the shots of your kids' rooms. I guess this means you don't want my daughter's old Hello Kitty make-up kit, or the American Girl desk, or the non-matching Barbie clothes. Pity!
July 2, 2009 at 1:46 PM