OH MY GOSH! LOOK AT THAT SKY! 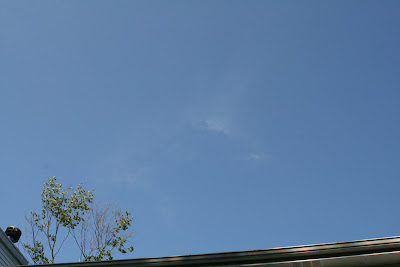 The SUN is shining. The sky is BLUE!

It's a beautiful day!

All the other thoughtful posts I've been writing and had planned and blah, blah, blah will have to wait!

I made the girls and two auxiliary girls pancakes from scratch this morning because the SUN IS SHINING (and I'm out of mix.) There is much happiness about the trampoline--especially now that it's been dried off. 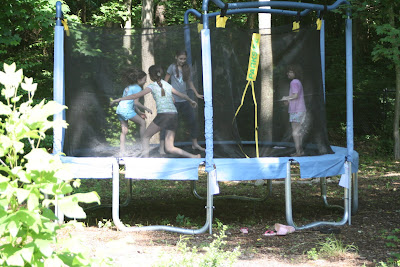 My husband is outside on a bike ride. My garden doesn't seem to have totally succumbed to rot and blight from the endless, endless rain. (PS: My friend Donna's husband won the race to see who could get an edible tomato fastest. I'm not sure he knows we were racing but we were and he won so handily that if he DIDN'T know we were racing, I'm not going to tell him. Because my tomatoes? Not even a hint of color yet.)(Unless you count brown. 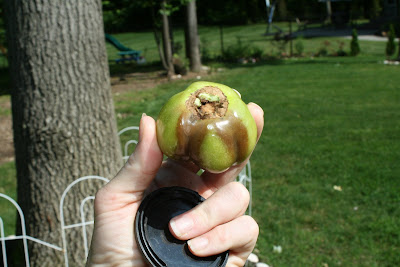 Okay, so, uh, the sun is still shining but as soon as I wrote the above, two girls collided on the trampoline resulting in tears and recriminations and then our neighbor poked his head over the fence and asked us if we could put bells on the cats since they have been leaving DEAD BUNNIES in his yard.

(Which, incidentally, means that I can't tease about the neighbor about having mob ties because A) he was very nice in the way he handled the whole situation and B) he was really concerned about those baby bunnies. I'm thinking most hardcore mobsters wouldn't be broken up about rabbits OR they'd take care of it by dispatching the cats post-haste.) (And yes, I learned everything I know about organized crime from watching The Sopranos.) (Shaddup.)

The dogs have both had baths. I took the neighbors a tray of pastries along with a handwritten note that I'd written on my "Pretending To Be A Grown Up" stationery. Austin has a new collar, too, since his collar seems to have gone missing, what with all the wrestling and all. 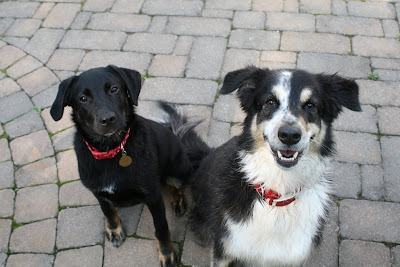 And we're on our way out to dinner at some friends--recent Austin ex-pats --who are cooking Mexican food.

Dudes, isn't it amazing what a little sunshine will do for a girl's outlook?
Email Post
Labels: Austin cats Everywhere Are Signs gratitude Homegrown Tomatoes humor? Not enough therapy in the WORLD Oh the DRAMA parenting Sunshine You Wanna Piece of Me??

Damsel said…
Um, can I come eat Mexican food, too? We should start an "ex-Austinites" club, and rotate dinners at each others' houses, where we would only cook Texas BBQ and Mexican food. *nodnodnod* (We just relocated to NJ from Austin....)
June 28, 2009 at 8:26 AM

Susan said…
Hurrah for sun unless it makes it 107 degrees out like it was at our house...no bike ride for me this weekend.

Susan said…
That brown part of your tomato? Blossom rot. It's from too much water at a critical time for tomato development. Gee, I wonder why it got too much water (she says wryly).
June 29, 2009 at 12:34 AM

I was so pissed Sat beuause I spent 3.5 hours watching the boy do a karate test indoors when the sky was like yours, then we went home for a nap and when we woke up it was raining!!!