A Little Croaky But Mostly Fine Otherwise, Thanks

I know. I know. One post in a week--people are starting to send me e-mails questioning if I'm still alive or if I've been buried under a mountain of cucumbers who are now holding me hostage until I make something besides those Bread & Butter pickles. (Y'all, they're like candy. They are so much better than pickles have a right to be. People who don't even LIKE pickles have one small taste and fall writhing in ecstasy to the floor.) (I hope that's ecstasy.) (I'd hate for someone to be having a seizure while I stand there wreathed in smiles and thinking they're complimenting my pickles.)

(Okay, okay, this is exactly why I am truly certifiable. Not only did I make the whole thing up about people falling on the floor in ecstasy/seizure about my pickles, I then found a way to feel guilty about it. Of course I did.)

AS I WAS SAYING, I came home from Europe and promptly developed the Upper Respiratory Scourge of Death, also known as the Dreaded Summer Cold. This is markedly different from the cold I had while actually IN Europe because I'm on a totally different continent and on THIS continent, laundry waits for no illness.

Anyway, I seem to be getting better, which is good because we've had house guests--our former babysitter from Austin, Steffi, has been here since Tuesday (leaves today, sob!) and my mother-in-law comes next week and at some point, we have to fit in all the doctors' appointments and eye exams and back-to-school shopping because school starts in a month. It will be nice not to feel like I need a defibrillator every time I walk up the stairs.

While Steffi was here, we did a few things we've not done yet on Long Island, at least this year. We went to the beach (it finally stopped raining, yahoo!) and Knit Night.

And we went to this place called Old Westbury Gardens, which is this fabulous estate in Westbury, New York. It's just spectacular. I mooned about, seeing The Great Gatsby characters around every corner, with their casual disregard for the grandeur and their complicated social agendas.

(Perhaps I should be clear and tell you all that I didn't really SEE them, but I could IMAGINE them. This was actually made more difficult by the insistence of the museum curators on these incredibly stupid costumed mannequins posed ever-so-artfully in most of the rooms. 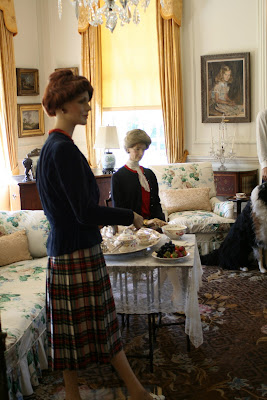 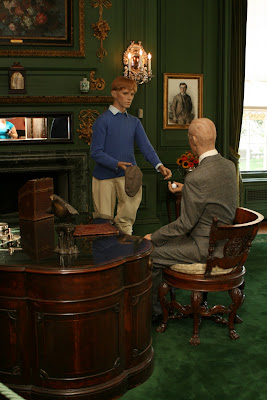 I wish I was better at Photoshop because the effort not to add thought bubbles to these pictures is making my head hurt.)

At any rate, the grounds were beautiful and we got eaten alive by mosquitoes so we were reminded that such lush vegetation comes with a price. Plus, lest we wax too nostalgic for such a romantic time, let us all remember one thing: Lack of Indoor Plumbing.

And that's all I'm going to say about that. Mostly because I have to get these cucumbers taken care of because, y'all, the tomatoes are starting to come in and I have this feeling Mount Tomato is going to make Mount Cucumber look like a speed bump.
Email Post
Labels: Homegrown Tomatoes house guests I heart New York Mount Cucumber Not enough therapy in the WORLD summer Sunshine WHAT? Doesn't everyone?

Damsel said…
I fall in the category of "not a pickle-lover" (to put it mildly) but would love to come over and test your ecstasy theory. :-) I even promise not to have a real seizure, or even a fake one.

I feel like we cheated somehow because we got an extra month of summer this year, what with the moving from Texas at the beginning of June and all.

Marion Gropen said…
I hope your improvement continues. Colds are just no fun.

On another note, if you liked the Old Westbury Gardens, you should consider a weekend in Newport (RI), and touring some of the "cottages" there. Don't miss the beaches while you're in town. (Although I think some of the best beaches on the East Coast are actually on Block Island.)

Another of my family's favorites is the Mystic Seaport, although it's a little different. It is a restored/recreated sea town, along the lines of Colonial Williamsburg, etc. with loads of activities and displays aimed at the 5 to 15 year old set.

And to get to any of the above, think about taking a ferry. Somehow it adds to the experience, even if it doesn't save much time. (Well, you can't get to Block without a boat, but you know what I mean.)
August 8, 2009 at 11:09 AM

Anonymous said…
Hey Barb, You really should go there during christmas. they have concerts and a tree. it is quite nice!!!

kim said…
Okay, the whole pickle thing cracked me up and yet made perfect sense. I hope you're feeling better. This crazy weather is messing with everyone.
August 8, 2009 at 6:09 PM

MadMad said…
I love going to visit mansiony things. My kids call them mini-museums... Just enough history, they say. Hope you're feeling all the way better soon!
August 9, 2009 at 7:58 AM

Hannah said…
Dear Barb, please consider FedExing some of your tomato greatness to an overheated, shriveled-up patch of real estate here in Austin. Cukes and pickles also welcome. Anything to help make your house less cluttered in anticipation of your mother-in-law's visit.

Unknown said…
OK those mannequins are creepy and really unnecessary.
August 10, 2009 at 1:28 PM

DK said…
Mannequins? Really, really creepy. But it looks like a cool place.