Yesterday, I made Tomato Relish for the second time in my life. The LAST time I made tomato relish (2007), I used my Father-in-Law's tomatoes which I brought back from Alabama. And I only had enough tomatoes for half of a batch. 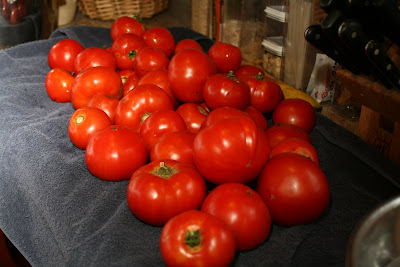 I had plenty of tomatoes. FROM MY OWN GARDEN!

(Er, sorry. I just get so excited about my garden, what with being such a frustrated farmer and all.)

In fact, even after cooking up 16 pounds of tomatoes, I still had these left and that's not even counting the ones that are still on the vine and will be ready today. 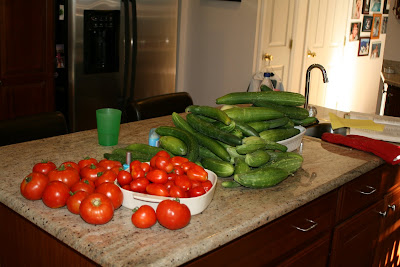 (Pardon me while I burst into tears while contemplating the never-shrinking Mount Cucumber.)

The most laborious part of making tomato relish is the peeling of the tomatoes. First I cut a little "x" in them and then blanched them in boiling water for about 30 seconds. 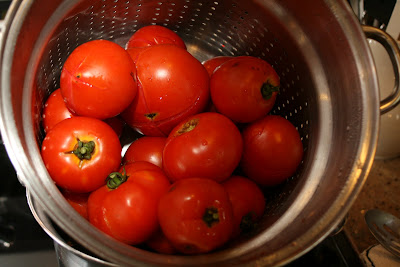 Then I put them in ice water to stop them from cooking. 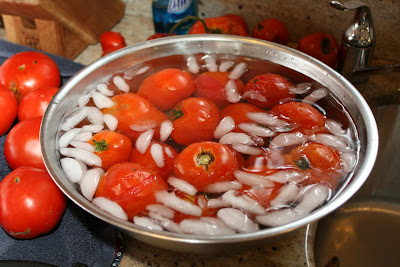 Then I peeled them.

This took roughly, oh, three weeks but at the end of it, I had a bowl full of peeled tomatoes. Ana, 11, passed by the bowl at this point and looked at me, disconcerted. "They look kind of gross -- all naked like that."

She has a point. 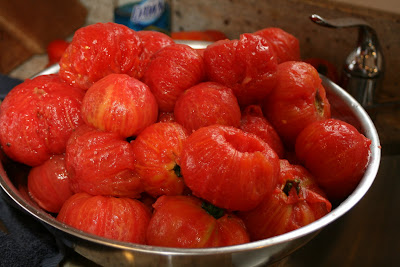 So, then I chopped the tomatoes and put them in a pot. 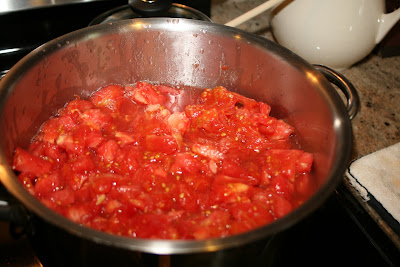 Immediately, it became apparent that I was going to need a bigger pot because I still had to chop three green bell peppers, three red bell pepper and TWELVE onions and add them to the tomatoes. (Actually, I only used eight large onions, instead of the twelve medium ones specified by the recipe. I had had enough of chopping and crying after eight, thank you.)

I was forced to use the really HUGE pot I usually reserve for big shrimp boils. 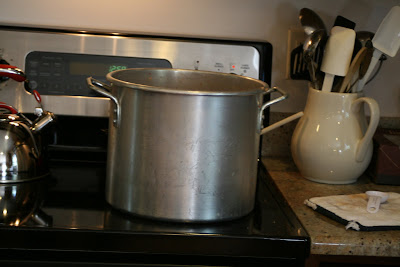 The problem with that pot is that it takes FOREVER to boil. 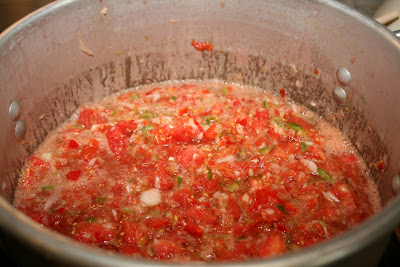 And then the relish has to COOK forever.

Eventually, though, I had my reward. 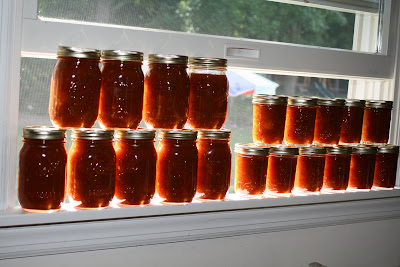 I find that I am very glad I made so much tomato relish THIS time because I don't think I'm going to want to make it again for a long while.
Email Post
Labels: cooking non-blog Farmer Barb gratitude Homegrown Tomatoes Joy Rush Mount Cucumber Oh the DRAMA summer

Susan said…
Boy, lots of hard work! Good for you! I gave up canning because it was so much work. If you hate the boiling/ice water method of peeling tomatoes you can use the freezing method instead. Just wash the tomatoes and pop them into a bag, then stick them in the freezer. When they're frozen, thaw them, and the skins will slip right off.
August 28, 2009 at 6:12 PM

MadMad said…
That is wonderful that your tomatoes survived the blight - we can hardly get any up here any more. Poor me. I was forced to buy pie at the farmers' market again...
August 28, 2009 at 7:51 PM

Stefanie said…
If a jar of that and your pickles just happened to show up at my door... I wouldn't complain. ;)

Hannah said…
Nicely done, Barb! Perhaps you ought to consider doing a blog giveaway? SOME of us live in places where gardens will not grow in the summer. Where heat records have been smashed this season. Where drought reigns. :-)
August 28, 2009 at 8:21 PM

Have you made tzatziki yet? That would use one or two cukes. Maybe more if, like me, you decide that yogurt sauce is perfectly fine plopped on top of a salad, too!

Ream O Rama said…
So Jealous. Georgia showed no love to our garden this year and all the tomatoes were a bust....devastating to someone who lives off (sob) tomato sandwiches in the summer. Feel sorry at my tale of woe yet? Wonder what could make me feel a little better? Hmmmm...
August 29, 2009 at 11:03 AM

Suna Kendall said…
Yeah, as pointed out earlier, no tomatoes in Austin. Hail knocked them all off, then it got murderously hot. Thank you for your blog, though, which I have been enjoying for quite so long, and for "introducing" me to the blogs of your friends!
August 30, 2009 at 3:32 PM

Foggle said…
Your relish looks fabulous. It is now relish making time in New Zealand and I use a recipe where you don't peel the tomatoes. The onions, however ...
The good news is that I have found a method for peeling onions and NOT CRYING!
February 8, 2010 at 7:48 PM