I really WANT to tell you about our Europe trip and how amazing it was and how we had this chance magical dinner with one of the team directors/owner of one of the American teams in the Tour de France but I'm having something of a cucumber crisis. As in: they are taking over my house and there is a mountain of them on my kitchen table. No matter how many I give away, the mountain still grows!

Yesterday, I made pickles, thanks to a recipe sent to me by "Rhonda from Baddeck" (unfortunately blogless but always so nice in the comments) and also because I wanted to do it before the house cleaners came in case I exploded something.

Here's how that went (my editorial comments are in "cucumber" green):

Prepare canning jars & lids – hold in a pot of just-under-boiling water. (I put mine in the dishwasher and used the SANITIZE setting. Because I am lazy.)

2 qts (after slicing) of unpeeled cucumbers sliced very thin (if they’re small, keep the seeds – if not, scoop the seeds out and slice up what’s left. Appearance isn’t critical.)

(HAH, if they're SMALL! I've got cucumbers here bigger than my first apartment. In fact, I have such large cukes that I can make this entire recipe with two of them. 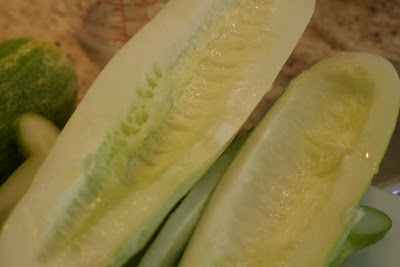 I decided to double the recipe in order to use up more cukes.)

Put cukes & onions in large bowl, sprinkle salt over them and then cover with ice water. Put in refrigerator for 3 hours to “brine.”

(Look, here they all are, brining madly. 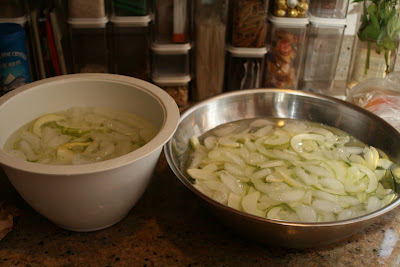 Wait a minute! What's missing from this picture?

Dang it! It would sure help if I could read. 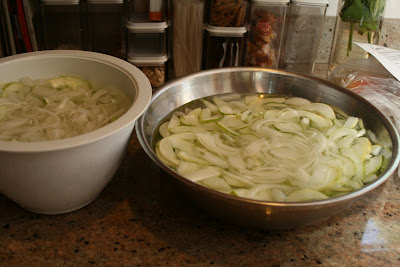 5 cups sugar (Which, when doubled is TEN FREAKING CUPS OF SUGAR. This is what ten cups of sugar looks like in the pot. 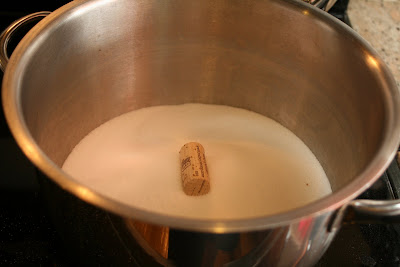 That's a lot of sugar right there.)

Combine juice ingredients in large pot and bring to a simmer. 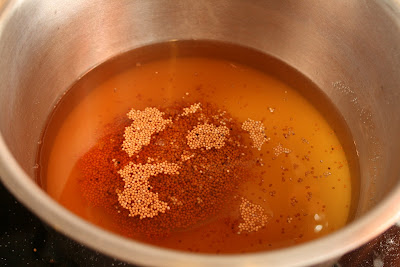 Drain cukes/onions and add to pot. 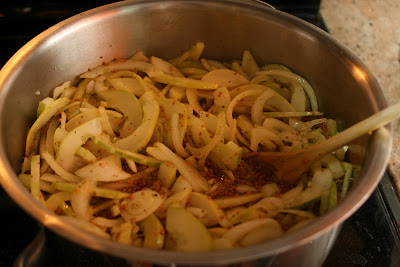 Bring to medium boil and cook for 15 minutes, stirring occasionally. With a slotted spoon (and a canning funnel), put pickles loosely in jars until half- or 2/3 full. Fill with juice to 1/4 “ from top.(I have no pictures of this because A) I have no canning funnel and B) withOUT a canning funnel, you sling a fair amount of really hot stuff about, causing some of it to land on your skin and make you curse. Er, hypothetically.)

Wipe rims (inside & out), tighten lids and invert for 5 minutes. 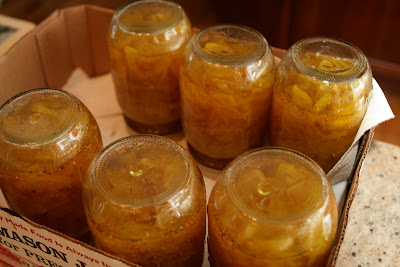 The pickles will continue to absorb the juice, which is why you don’t want to pack the jars too full. Give them a few days to “marinate” (if you can wait that long). If pickles don't seal (distinctive "pop" and lid is depressed), put them in the refrigerator and eat them first.

I didn't hear the pop but the lids look depressed--downright suicidal --so I think they turned out okay. I will say that I think I chopped something wrong because these don't really look like pickles so much as some sort of relish you might eat on crackers or hot dogs or something. Oooh, I bet they'd be fabulous in chopped salad.

I tried to take some artsy pictures of the row of jars with the sun shining through them, turning them golden and luminous but, um, the sun is not shining because it is raining (shocker) and besides, how beautiful can a jar of pickles really be? 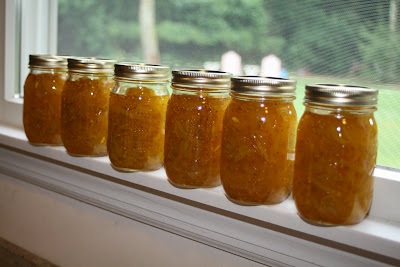 I decided to go with supermodels posing with the pickles. 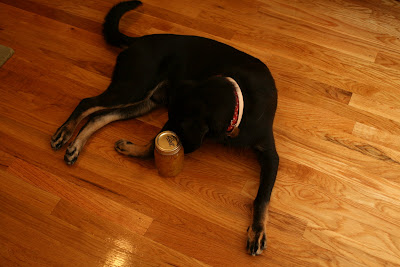 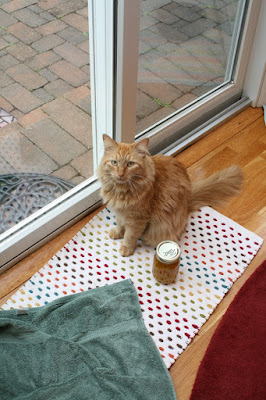 Miri said…
Who SAYS pickles can't be beautiful? I think yours are smashing. Also I think you are HILARIOUS with the "downright suicidal" lids. Ah, so glad you're back on the continent.
August 2, 2009 at 11:14 AM

knittergran said…
I once grew cucumbers - WAY too many cucumbers. So I made pickles, and guess what? Too many cucumbers make too many pickles. I kept giving them away, and still had to move some to MA when we moved from NYS.
Never again!
August 2, 2009 at 11:33 AM

I love your writing style--thanks for the laugh! And I wish I lived close enough to take some of your excess cukes. Yum!
August 2, 2009 at 11:55 AM

Lisa B. said…
I love your blog. I love how the ordinary moments in life become extrordinary insights to life. You forgetting to add the onions is my everyday pattern for cooking and living my life. "I was supposed do what? Where did it say that? I never, saw that....oh! I guess I missed that part! Who knew pie crust used flour? Oops...Oh, well."

Keep us all informed on your cucumber and pickling adventures. I have your blog on my daily list of blogs to read. I will continue to live vicariously through you--no gardens and no desire/ability to can!
August 2, 2009 at 12:28 PM

Rhonda from Baddeck said…
Congratulations on making your first batch! I hope it becomes a family tradition for you - we need several batches to take us through the year. I had to get used to seeing them in tuna salad, but now it's 'normal.'
August 2, 2009 at 2:21 PM

Candi said…
Barb - you DO know that this post just totally fueled my garden envy, right?

That's ok - next year I'm planting from seedlings instead of seeds and then hopefully I can use this pickle recipe.
August 2, 2009 at 7:24 PM

Hannah said…
This is all very Ma Ingalls of you, Barb. Now's the time for a little summary saying like "All's well that ends well."
And I think your picture turned out just great!
August 2, 2009 at 9:58 PM

ToyLady said…
The pickles look lovely, but I cannot BELIEVE how that puppy has grown!
August 3, 2009 at 8:42 AM


OMG I laughed outloud! thanks I needed that.

Ann in NJ said…
I still say it's zucchini that's supposed to take over the world. Hope the pickles are as yummy as they look!

I've got another cucumber use for you - July Real Simple had an appetizer recipe on the back page. 1 small chopped cucumber (I removed seeds) and 1/2 c. corn (fresh or canned or frozen, i suppose) and 2 tbsp. goat cheese, mixed together with salt and pepper to taste. Put into Tostitos Scoops and you have a yummy QUICK canape. I eyeballed amounts and did equal parts of corn and cucumber, and added the cheese until it looked good, and was heavy on the pepper. Went over very well with friends, and super easy.
August 3, 2009 at 2:56 PM

Tenna Draper said…
You wanted Sweet Pickles??? Dill spears and/or salt and vinegar pickles might have been better. Both recipes are quite different.

Unknown said…
also also: I wonder if cucumbers would work like zuccini to make faux-pple pie? http://allrecipes.com/Recipe/Zucchini-Apple-Pie/Detail.aspx
August 3, 2009 at 6:30 PM

LaDonna said…
I would so love some of your extra cukes! I'm so gardening-challenged that I can't get anything to grow.

Karen said…
Umm, am I the only one who wonders about the cork in the sugar? Is that a normal part of pickle-making that everyone but me knows, so no one asked about it?
August 6, 2009 at 2:08 PM

Liz in Ink said…
Can I just say that all these cucumber posts are cracking me up? Lance doesn't have anything on your cucumbers...
August 8, 2009 at 12:31 AM