The Cough, the Sock, the Blues Vanquished 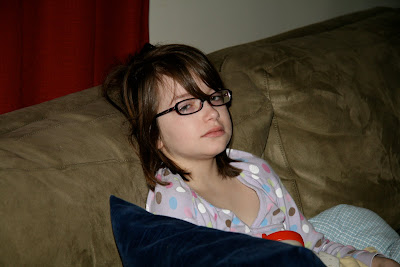 She was fighting a really awful cold over much of the weekend and woke up on Monday with a fever and a side ache. I took her to the doctor and the strep test was negative but the doctor did say that her cough was worrisome and that we needed to make sure it doesn't get any worse in case it's

(Note that you should NEVER, EVER, EVER GOOGLE "child pneumonia" unless your child is now over the age of 60.) (Maybe not even then.)

So, that's what I've been doing this week.

Apparently it worked because her fever is gone today and although her cough is still horrifying, it's not any WORSE than it was.

Did y'all just feel that sigh of relief? I mean, it was so big that I think my bones all melted and pooled on the floor at my feet.

In other news, I have cleansed my Knitting Karma. 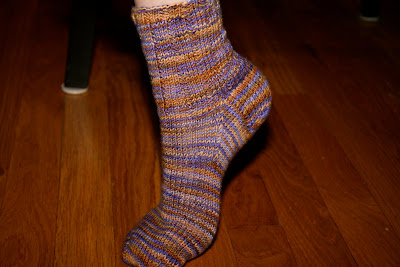 (Ana's sock.  Claudia hand-painted sock yarn in Bearded Iris (which was just a dream to work with and which doesn't photograph near as vibrantly colored as it is in real life.  Thuja sock pattern.)  (Yes, AGAIN.)  (So sue me.) 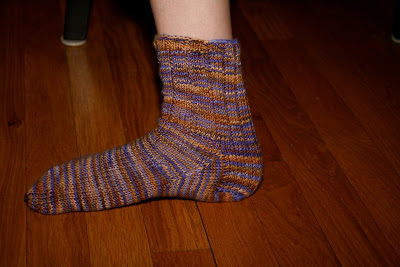 Yes, that is a seriously flat foot.  Mercifully, she seems to have inherited her feet from her father--fast, flat feet with no deformed bones.  The interesting thing about this sock, though, is that I really played with the stitch count.  I realized that I wasn't making my socks tight enough on the wearer's foot.  So while I started out with 52 stitches for the cuff, the foot only has 44 stitches.  It fits her long slender foot perfectly.  Unfortunately, her feet are still growing so who knows how LONG it will fit her but them's the breaks with custom socks. (Must now knit the second sock before I forget what I did.)
**********
We had the most beautiful snowfall this morning.  It's not cold enough to make the roads awful, but it's just enough to fill me with that sense of peace, kind of like when I go to the ocean. I stood at the kitchen window and watched it, filled with a sense of tranquility and filling my cup back up. 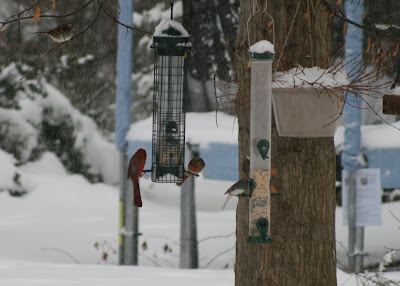 I know what you mean about watching it snow. As much as I am so sick of snow around here, I still love it when we get big, heavy snow. Especially if I know I don't have anywhere to go. I sit in my livingroom and just watch it fall, accumulating everywhere.

I remember that it must melt and go somewhere in the next few weeks. I better check my flood insurance status again.
March 3, 2010 at 11:37 AM

joannamauselina said…
What a great picture of the birds, and what a pathetic picture of poor little Jane!
My baby had pneumonia when she was about three. It was amazing. She was sort of sick, lying next to me on the bed as I read to her, and suddenly (and I mean suddenly), she was really sick. I rushed her to the doctor, got the proper antibiotics, and all was well. Pneumonia is really scary. It was the main cause of death in the 19th century! Good thing you are a vigilant Mom!
March 3, 2010 at 5:30 PM

Anonymous said…
I hope Jane is much better every day.

What? No squirrels at your birdfeeders?

Susan said…
Poor Janey. I'm glad that she has dodged the pneumonia bullet. I've never been sicker than when I had it.

TheOneTrueSue said…
Oh - poor kiddo... Is she feeling better? Pneumonia, GRAVY. I can only imagine what a basket case that would make me.

Mokihana said…
I love all your bird feeders! Bless you for feeding all your feathered friends. I hope Edward doesn't jump very high.