Marriage and Towels: A Lesson in Gender Differences. Maybe. 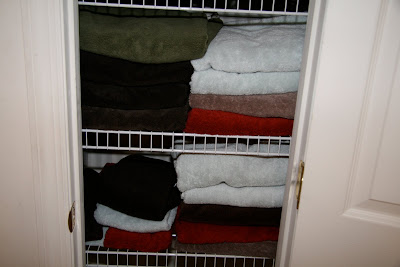 My bathroom linen closet
Some background: I have a Thing about towels.  I like big, plush, thick, absorbent towels, and, I do not like towels that are showing wear-and-tear. Even when I was in college and penniless, my towels were always in good shape. It's just a Thing I have.  (I'm a decided person in some areas of my life and one of those areas happens to be towels. I know what I like and I'm actually willing to shop to get it.)  About two years ago, after we moved here, I redid our bathroom colors.  In the past, we had green  and cream colored towels but the green towels were starting to fray.  I kept trying to put them in the dog towel bin but then I'd forget and they'd end back up in the linen closet and then it would strike me that I was using a towel that I had used on the DOGS and the cycle would start again.  So, I went completely out of my mind, ordered dark brown and light BLUE towels and that's what we've been using.

More background: My husband is an impeccable dresser and a phenomenal bargain shopper when it comes to clothes.  This year, his work has kept him so busy that he hasn't been able to really take advantage of the end-of-season sales. (Y'all, it's All Bathing Suits, All The Time in the stores despite the fact that it's still in the 50's here during the day and in the 30's at night.  I guess by the time we have to turn the air conditioner on, there will be nothing but parkas in the stores.)

Anyway, Coop has been doing some sale shopping on-line and on Saturday, a package arrived from Ralph Lauren.  In it was a gorgeous sweater (green, less than half price), a few other shirts and...a towel.

I looked at him.

"You bought a towel?"

"I wanted a green towel."

"So, you bought ONE green towel?"

"Well, I didn't want to presume to buy towels for the house or anything, but I wanted a green towel."

"It's much more than one towel.  Now we have to change the colors of the bathroom so that we match."

"You can't have just one green towel."

And a bit later, I said, "I can't believe you bought ONE towel.  Do you know, I don't think I've ever bought ONE towel in my entire LIFE?  I mean, you need hand-towels that match and you need at least a matched set..."

"You always say that, but you are NOT a simple person and your list of things you have to have is longer than a few items.  But that's beside the point. *I* would have bought green towels had I known of your obsession.  But I wouldn't have bought just ONE OF THEM."

"That is just NOT true.  When I met you, your towels were blue and gray, and all frayed and gross.  I BOUGHT you your first green towels."

"So, you bought ONE.  One lone towel, just for yourself."

"I can send you the link if you want to buy some more.  It was on sale."

"Okay, so now I guess we'll have green towels again."

"I didn't want to make a decision for you or the bathroom.  I just wanted a green towel."

So, I don't know what any of this means.  We totally do not see each other's side of this issue. It isn't like Men are from Mars, Women are from Venus...it's more like men are from some small planet that only THEY inhabit.  (And all the towels are green.) I feel like if I could get to the bottom of it, I would totally understand the difference between how men and women think.

(Lest you think I could let this golden opportunity to tease my spouse pass, though, later that afternoon, I suggested he wash the dogs since it was such a beautiful day.  I promised him green dog towels.)

Email Post
Labels: family humor Life in the Modren World Marriage Ain't for Sissies Maybe I Should Just Shut Up Not enough therapy in the WORLD OCD? Not me. WHAT? Doesn't everyone?

Miri said…
There are very, very few things I *must* have. Good towels are on my short list. And the matching thing doesn't drive me batty with anything else. For me it's the laundry. I have to do towels in a load with like towels. One green towel would kill me.
March 24, 2010 at 10:32 AM

The Dister said…
Yeah, like my husbands football trophies. He is so proud of them that I went out and bought a beautiful shelving unit just for displaying them. They look so beautiful and shiny and manly... in that empty space, in the basement, under the stairs, where there's no light....
March 24, 2010 at 11:12 AM

Annabanana said…
This could SO be a conversation with my husband and I...I think we have about 1000 topics just like it - I love how you expressed the sentiment - thank you for the smiles!
March 24, 2010 at 11:23 AM

joannamauselina said…
Hmmmm! This reminds me, I need new towels. My granddaughter has one green towel, and I have one blue towel. There used to be two blue ones, but I won't tell what happened to the other one. Too irritating. She also has one yellow towel, but that is not allowed to hang in our downstairs bathroom, and must hang upstairs on the back of the door where it won't show.
March 24, 2010 at 12:44 PM

Tiny Tyrant said…
I have the towel thing too. The husband totally doesn't understand it, but neither is he crazy enough to go near my OCDness and buy any, let alone just one on his own.

Tiffany said…
So towels are part of DECORATING to you, it sounds like. And Coop sees that as your purview. He doesn't want to interfere. He just wants his green towel. It seems kind of like the guy who is trying desperately to find a place his commemorative NASCAR mug fits into his wife's professionally-decorated living room.
March 24, 2010 at 5:23 PM

Marion Gropen said…
I loved this. My husband has NO IDEA what towels we have, let alone where the clean ones are. (And have been for 15 years . . .). But he, also, would feel perfectly comfortable buying one towel. And never have a clue that you have to have one set on the rail while the other one is in the laundry room.

Then again, I'm not sure he knows where the laundry room is, either. (Well, that last might be an exaggeration. A little one.)

ToyLady said…
I would so buy EVERYTHING I could find in GREEN - just for him.

Would you like your own special green napkin, hon? Here's a pair of Special Green Socks. Find him a green tie. Serve HIS dinner on HIS green plate. One green coffee cup in the morning.

But then, I'm mean like that. . . and I probably wouldn't really do all that.

LaDonna said…
Hmmmm...I think I agree with Tiffany on this one. While the color of his towel may not match the decore of the bathroom, having a green towel seems to be important to Coop. If something as simple as a green towel makes him happy, maybe it's not so bad to let him have it. Maybe put a hook on the inside of the linen closet or the back of the bathroom for him to hang it so that it doesn't change the aesthetic of the room when someone enters? Just a thought.

At least he's not trying to hang deer antlers or or a mounted fish in plain sight in your living room. My hubby has been trying to talk me into this one for months. I told him that's what the garage is for.
March 25, 2010 at 4:56 PM

Suna Kendall said…
My dad once bought me ONE towel for Christmas, when I got my first apartment. Oddly enough, I treasured that one towel for years, just because he thought enough about me to buy it for me.
March 26, 2010 at 11:40 AM

Bullwinkle said…
(Oh how I've missed reading your blog! Thanks for the laugh!)

But sadly, it reminds me that we did paint our bathroom (3 months) ago and we haven't been able to agree on towels since. He likes thick plushy ones and I'd like colors that appeal to me. So far the two characteristics have not meshed in one towel.
March 29, 2010 at 10:52 AM

Susan said…
I get the *one* thing. After being married for 25 years it would never occur to me to buy *one* towel. It would be like buying one pillow case or making a meal for one, doing only your laundry. And of course they need to match, you aren't dorm mates.
March 29, 2010 at 2:36 PM

STQ said…
Ok, so I don't have that particular towel "thing," nor will I claim to understand it. :) I, however, have my own towel "thing." I live in Las Vegas (hello 5% humidity) and my skin is so dry, it's amazing I still have any. So, I use baby oil in the shower before I dry off. That really helps, by the way... BUT, the problem is, the towel then gets baby oil on it, which is not so good for drying the hair the next day. Eeewwww. Ergo, I have to keep my towels separate. SO, I ONLY use a blue towel on my hair and ONLY a green towel on the oil-slicked bod. Divine hubby thinks it's weird and points out that HE uses green towels on his hair and he's just fine. Harumph.
April 6, 2010 at 10:36 AM

Anonymous said…
The best post! I have a towel thing too.

Can't have it any other way.