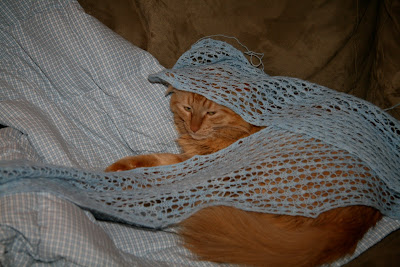 So, I finished my Olympic Knitting in plenty of time before the real Olympic torch was extinguished.

And honestly?  I could not have cared less.

Seriously, it is the most unsatisfying thing I've ever knitted, especially when the end result looks so small and not-at-all stole-like.

I washed it and blocked it before I even wove in the ends because, well, why bother? (Plus, I forgot.)

So, then Ana (11) and I decided that at least we should have some fun with it and we decided to use the pets to model it.  (Okay, this is after I suggested that SHE model it and the look of revulsion that crossed her face made me realize that I had crossed the Invisible Cool Mom Line (ICML) so I hastily changed the subject.) 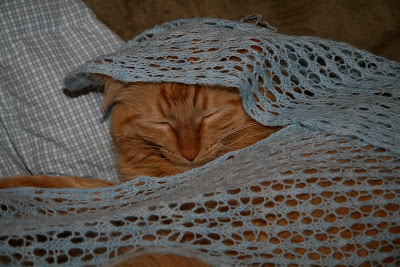 We didn't have great luck with Edward, who is firmly convinced of his own unadorned beauty therefore refused to even, um, WAKE UP for the photo shoot. (Freaking prima donna.)

So, then I tried to put it on the Puppy Austin whereupon Scout (our older, mentally unstable dog) came UNGLUED. Yes, Scout--our dog who pees all over himself if you so much as look at him while you are saying hello, decided the time had come to take a stand.  He was going to protect his friend Austin from Scary Knitted Goods!  Because they are Knitted.  And Scary!

I thought he was going to nip me, which is when I made the Scary Knitted Goods look like nice soft wisps of lace by comparison. (Because, you know, THAT'S EXACTLY WHAT THEY ARE.) (And then I got to clean up the floor.) (Freaking submissive urinator.)

So then we tried Thomas, our big fat kitty.

Thomas, it turns out, is a NATURAL at this modeling gig. 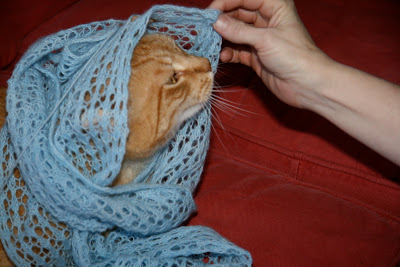 "You're sure this is a designer original?" 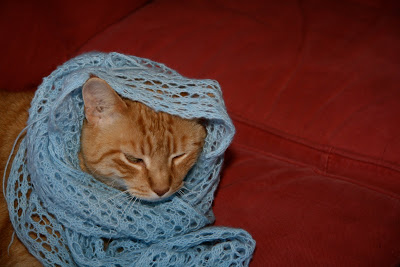 "Let me have a moment here to find my inner motivation..." 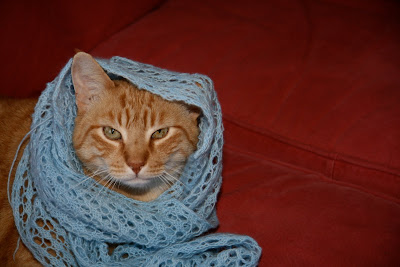 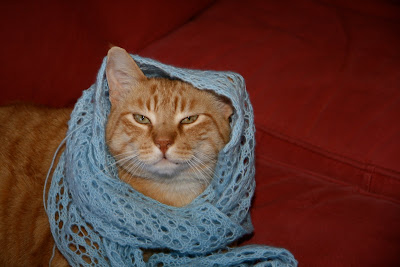 "Don't hate me because I am orange." 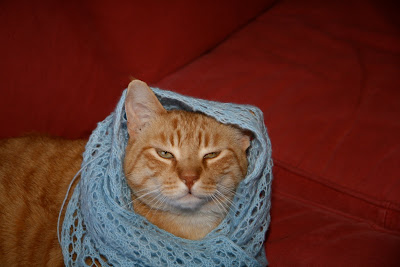 "Fasten your seatbelts, kittens, it's going to be a bumpy night." 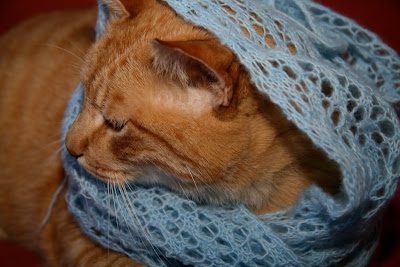 "What do you mean I'm not getting paid?  I want my agent on the phone NOW! And where's the tuna? I was promised TUNA!"


Next year, I'm thinking about knitting my own final resting place.

Unknown said…
I'm so glad I got to see some Thomas today. I'm sort of umm...groggy? Dying? Something I can't think of the word with being so sick.

I like it. And guess what? Dev and I taught ourselves how to knit yesterday. Oh okay, Dev was bound and determined to learn and I had to because he needed help. But now I can do a little something. Woo hoo!
March 1, 2010 at 7:03 PM

Susan said…
I totally want to see you make a knitted casket next year. It reminds me of one of the first (maybe THE first, I can't remember) Corner Gas episodes where Oscar is building his own casket with good lumbar support.
March 1, 2010 at 7:34 PM

Ann in NJ said…
The scarf is lovely, but I can see how all that work and you end up with ... a scarf, would be somewhat unsatisfying. I have not made the venture into lace knitting yet. And I chickened out on signing up for the Knitting Olympics, even though I knit along, so no gold medal for me. But I finished 2 (two) pairs of mittens! Which is 1.5 more than I expected to. Pictures on my blog later if my daughter remembers to bring hers home from school.
March 2, 2010 at 9:20 AM

Rhonda from Baddeck said…
Congratulations, Barb! You deserve that medal - you pushed on in the face of error, hardship and disappointment. Many of the Olympic athletes experienced the same, but they didn't quit, either. You met the challenge and you prevailed. Hurray for you!
March 2, 2010 at 12:04 PM

Jen said…
That piece is gorgeous! Although I have to agree that it is not stole-like, but scarf-like. I am slowwwwwly teaching myself to knit and I would love to be able to make something like that....congrats to you!
March 28, 2010 at 4:41 PM