We have two dogs.

Our older dog, Scout, is a Border Collie mix. 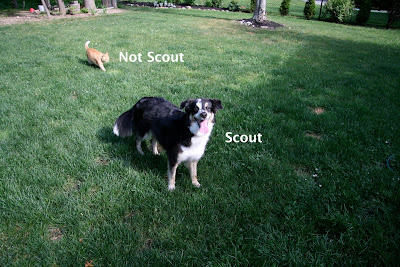 Scout is an interesting animal because, although for a long time I complained that he was dumber than dirt, he's really not.  Actually, he's probably too smart.  He's just so fearful and nuerotic that he is his own worst enemy.

Take, for example, the game of Fetch.

Scout really loves the game of Fetch.  I mean, REALLY, REALLY loves it. I used to say he was the best dog I'd ever seen at bringing the ball back.

Then we got the puppy.  (Who, I guess, we will still call "The Puppy" after he is toothless and on a walker.  Really, he's no longer a puppy.  He is 18 months old.  His actual name is Austin.) 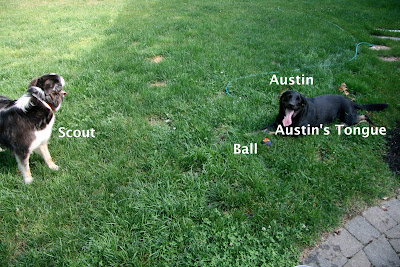 Austin just loves to play.  Anything.  Playing = GOOD in Austin's world.  Austin is smart but he is NOT neurotic.  He's a very simple creature and let me just say, the dog is Big "H" Happy.

He LOVES to play fetch.  When my husband is traveling for business and unable to take the dogs running, the way I  exercise the dogs is to use this thing called a "chuk it" to throw the ball to the far ends of our acre lot.  We do this a LOT.  I've gotten really good at throwing the ball.

Which is a good thing because I have to throw it now so that Scout doesn't get it.

If the puppy gets the ball he comes running right back to me and drops it at my feet so that I can throw it again.

If SCOUT gets the ball, he brings it back half way. 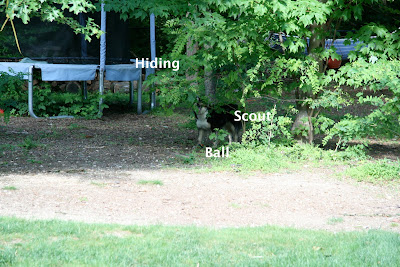 And then he just stands there, waiting for his engraved invitation to bring the ball all the way back. 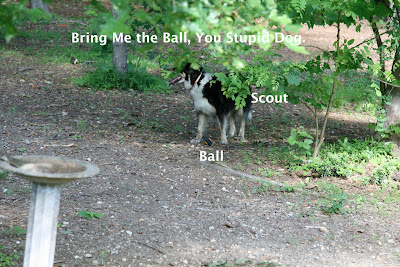 No amount of cajoling will make him bring it back.  In fact, what I have to do is get all threatening and call him names.

Sometimes we just give up and go inside until he brings the darn ball back. 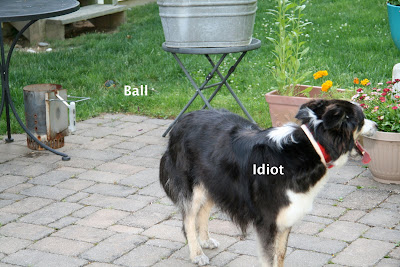 The thing that's so frustrating is that Scout really WANTS TO PLAY FETCH.  But he's so afraid that someone else (Austin) will grab the ball OR that maybe Austin will get credit for returning the ball, that his fear, confusion, neuroses stops him from doing the very thing he loves the most.

I feel like I am doing exactly the same thing with living mindfully. I want to be in the present and listen to my body and live healthily and fully. And yet, again and again, I find myself bringing the ball only half way back out of fear and uncertainty and habitual blindness. 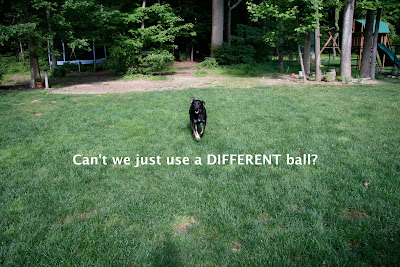 Email Post
Labels: A picture is Worth at Least Ten Words Austin dogs dysfunction humor? Not enough therapy in the WORLD what makes a life

Maggie said…
Barb,
Okay, so maybe Scout doesn't have all of the ingredidents he needs to play Fetch in the way that suits him.

Maybe he needs a new game that's called something different that has different rules and that he plays on his terms. Maybe it's the contrast to the Puppy that makes it seem like he's doing it wrong.

LaDonna said…
My dog does the same thing, Barb. The difference being that, when she doesn't bring it all the way back and you tell her to get the ball, she stands there and barks at you...and then at the ball...and then back at you again.
June 1, 2010 at 12:03 PM

Scrat the Brat loves the ball. If I play with him then Oscar wants the ball.

I throw two or three to make sure that Scrat cannot herd all of them so that Oscar gets one if he wants and I have one in reserve to get Scrat back to me (my ball is better than the one he already has you know).
June 1, 2010 at 1:48 PM

Tenna Draper said…
Well, Barb, here again, I have to tell you.

Your dog, Scout is not dumb. He is not even neurotic.

You have taught him that eventually you will give up, and the ball is his! He wins.

I have the same trouble with my dog. "Go to the door." "GO TO THE DOOR" and finally, yelling, "GO! TO THE DOOR!" Instead, she runs into the bathroom and hides under the toilet.

We have the same dog. You cannot allow him to have the upper hand. YOU are the head dog, and the dog has to realize it and accept it fully. Anything less, and the dog is in control.
June 1, 2010 at 4:07 PM

Susan said…
I don't know hpw to get out from under the dog is in control thing, so I agree on multiple balls. How that helps with the mindfulnes, I don't know which is maybe why I am fat?
June 1, 2010 at 9:06 PM

Citations said…
Our dog does that with frisbees. She is not neurotic, she's just bloody minded. We do use two frisbees with her, and by "we" I mean my husband, but he still has to walk the length of the field after every throw to get the other frisbee.
I would say she's trained him well.
I don't know why we do the same thing, though.
July 8, 2010 at 10:18 PM