My girls took a three-day refresher swim course this past week at the YMCA.

Initially, my husband and I signed them up and picked their classes based on what we know about their swimming abilities.  They are both strong swimmers but need work on their various strokes.

After the first day in swim camp, both girls were sort of "demoted" and put into classes with much younger kids.

On the third day, both girls were promoted into the higher classes again.  It turns out that the real problem was not ever with their swimming ability but instead, with their understanding of what the various strokes were CALLED.  In the North, what we Southerners call "Freestyle" is called "Front Crawl."  And what we call "Backstroke" is called "Back Crawl."  Once we got the language issue worked out, both girls were fine.  (Jane, 9,  said that her instructor asked her to do a "back float," but Jane heard "back FLIP," so she did one.  The teacher said, "Well, I said, 'back FLOAT,' but that was really impressive!") I think maybe I could have helped facilitate this issue but, as seems to be the case any time anyone is teaching my children anything in New York, parents were not allowed in the lessons.

Until the third day, when we were allowed to come in and watch.  It was at least 800 degrees in that pool area.  (At one point, the woman next to me turned to me and said, "Okay, I have to wash my bra now."  I knew EXACTLY what she meant.) Also in the pool area, this sign was posted: 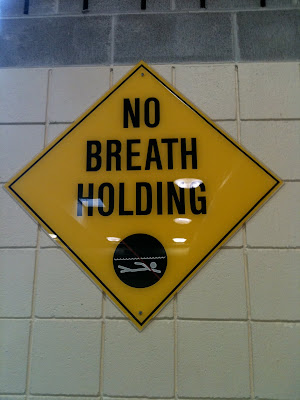 I hope this is another one of those language things.
Email Post
Labels: Everywhere Are Signs humor summer Texas Meets New York The Great Cooper Move

Miri said…
A few years ago our oldest got demoted at a summer day camp because the counselor thought she had a language issue. Which she did. She was speaking in another language, under her breath, just to amuse herself. Gah.

Rhonda from Baddeck said…
Now we have a new language for swimming? In the Olympics, they're called Freestyle and Backstroke. I hope your girls had fun and proved their skills even if the instructor didn't 'get it.' Getting ready for pickle season?
June 27, 2010 at 1:47 PM

Karen said…
Maybe the no breath holding means no "contests" to see who can hold it longest? or maybe in the north they must grow gills to swim.
June 27, 2010 at 2:42 PM

Susan said…
I can't believe that parents aren't allowed to watch their kids' lessons. That would be my cue to get them out of those lessons fast but it sounds like you don't have many other options in NY. Weird.
June 27, 2010 at 5:27 PM

I get the language thing. my mother in law from northern New York had a terrible time making herself understood when she visited us in WV.

Anonymous said…
No breath holding - google it. This sign is part of a campaign to bring awareness to and help prevent shallow water drowning.
June 28, 2010 at 7:23 PM

Bullwinkle said…
And all this time, I thought it was just the "Y" (not-regional).

I did Google it and the only article I found that referenced the rule was from my own YMCA! http://www.wsaz.com/news/headlines/19470064.html

I do understand the intent but I think the sign is phrased stupidly anyway. You have to hold your breath to swim.

Susan said…
It seems like they are always changing the names of things not just regionally but generationally, etc.
June 29, 2010 at 1:23 AM

Anonymous said…
I think the sign effectively communicates the intent. It may cause children and parents to question this safety issue too and learn more.

Here's an excerpt from one online article:

Before kids sign in to splash the day away at the Huntington YMCA Kennedy Center pool, they must read a new rule posted, due to an alarming number of drownings around the country related to shallow water blackout. The sign says "No breath holding activities are allowed at this pool."

"We found many people, kids trying to hold their breath, competitive athletes, have drowned like this," Britt Arthur, aquatics director, said.

Experts say the blackout can happen when someone hyperventilates before trying to swim or stay underwater. Many young swimmers here knew more than parents about shallow water blackouts.

"My friend had a seizure from staying underwater, having a underwater tea party, it was scary," Erin Duverlink told WSAZ.com.
"Let parents know more, because kids do play games, and it may cost a life," Kim Turley, a parent, said.

Tiffany said…
Wow. I'm always encountering people online too cowardly to stand by their own opinions, but it's pretty stunning when someone feels the need to go "anonymous" in order to support what she sees as valuable water safety tips.

Anonymous, I can't say for sure since you've opted to hide out and toss comments from behind a protective wall, but I'd lay down a bet that you don't have children. If you did, you couldn't possibly think "no breath holding" effectively conveyed anything. Children are literal--or at least, a lot of children are. The next lawsuit is likely to be brought by the parents of a child who tried to comply and ended up with a lungful of water for her troubles.

Murr Brewster said…
Man, I wonder if I would have learned how to swim if that sign had been there for me. Someone finally figured out when I was 25 that every time I put my face in the water I held my breath. Even though my head would pop out on cue with every other stroke, I had to blow it all out and there wasn't time to suck more in before my face hit the water. I could swim, like, nine yards. Pitiful.

michiganme said…
Must be New York has their own set of names for strokes, we call them freestyle and backstroke in Michigan too.

I've seen those breath-holding signs too, but never really knew what it meant. I figured it was another one of those dangerous, thrill-seeking games that kids have come up with.

All the places where we've taken our kids for lessons didn't allow the parents to stay next to the pool to watch either. But we could watch from the club house or through the one-way glass at the Y; I found it disconcerting too. One of the places explained that bystanders can distract the lifeguards & teachers. But I would never leave little kids if I couldn't stay at poolside.
July 1, 2010 at 6:55 PM

Kathy Ireland said…
Weird. Growing up, I lived in the pool from June til the end of August. I don't recall breath holding to ever be a problem. I would imagine the number of drownings would increase even more dramatically if the kids didn't hold their breath under water.

Plus, advanced breath holding skills always come in handy when somebody, you know, farts!
July 7, 2010 at 4:28 PM