Random Is as Random Does

Summer has officially started and we have house guests.  I'm finding it hard to keep up with everything, get the kids to their respective activities AND write on my beloved blog. I'll try to get more organized.  After 13 years as a mother, you'd think I would be prepared for the Summer Chaos, but it sneaks up on me every time.

One really wonderful development is that it looks like Ana (13) is going to be attending the same academically advanced private school that Jane (10) attends next year. I'm so excited for Ana; she's THRILLED, and although we may be eating cornflakes for dinner as we pay for two kids in private school, I LIKE cornflakes. It's a win all around. We're going through the application process now, but it looks like everything is good to go, barring any other economic disasters. I'll keep you posted.
********************

It turns out that my husband and I are not the only ones with a Mixed-Towel-Ethic Marriage. Check out this post by The Bloggess. It made me realize that my husband and I are very formal and serious when we argue. I have never once called him names, nor bought a five-foot chicken in retaliation for anything. (Although I confess that now I kind of want one. Wouldn't be hilarious if after all I did to remove the freakin' roosters from this house, I now replaced them with CHICKENS?) (Well, hilarious in a Mental Illness kind of way, I mean.) 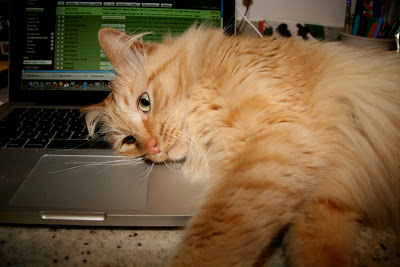 As you can imagine, I hate this --NOT.  Although, it's really hampering any kind of production, and I really didn't need any other distractions.
I know it's a slippery slope and I am probably becoming one of those sad cat women, destined to die alone in a studio apartment, surrounded by my 125 cats, but holy COW, I so love that cat. I was thinking the other day that if more people behaved like Edward (not the catching chipmunks thing, but the sheer single-minded devotion he displays to me, his Person), the world would be full of happy, purring people. His entire attitude is, "Why yes, I am the most gorgeous creature on this planet and many bow down before me, but I choose YOU.  I will now follow you around and curl up in the crook of your arm any time you lie down and I will purr my Mighty Purr only for you."  Because of this attitude, I am willing to forgive an awful lot. I could forgive him a giant chicken, I really could.


*********************
In other Jane news: Jane played softball for the first time this year and it turns out that she's fantastic at it and she LOVES it. Now she practices all the time in the back yard, which means we have to bring the dogs inside because they keep fetching (and slobbering all over) her softballs. 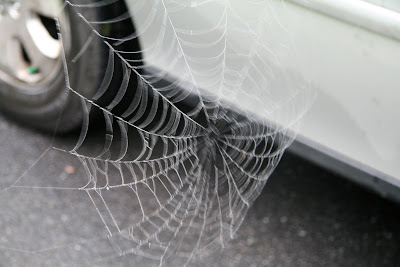 I totally understand the impulse and the futility.  I'd like to build a huge spider web to catch these fleeting days.
Email Post
Labels: A picture is Worth at Least Ten Words Ana Edward Farmer Barb humor? Joy Rush Marriage Ain't for Sissies Operation Living Out Loud parenting Rooster Count summer The Jane Cooper Experience

hokgardner said…
The HEB near our house had two of those giant chickens outside. I nearly doubled over laughing at the idea of bringing one home for my husband, who would most decidedly NOT be amused.
June 27, 2011 at 10:37 AM

Panhandle Jane said…
My DD and I once started a list of legitimate jobs that would not necessarily enhance one's resume. An example would be the "barker" who announces shoes at Shoe Carnival. The second one was the giant inflatable duck scheduler for Quick Quack car washes. Of course, the secret would be giving them a suitably grandiose title.
June 27, 2011 at 11:49 AM

The Dister said…
I actually had to leave my desk after seeing the picture of the 5' metal chicken at the front door. They may be the funniest thing I've seen this year.
June 27, 2011 at 12:16 PM

Unknown said…
bummer...I have no one to annoy with chickens. My kids would LURVE them.

The reason you can't keep up is not because you've missed a lesson in your 13 year career parenting, it is the addition of the softball...that is if there is anywhere NEAR as many games & practices as there are for little league...and if it rains in NY like Noah lives there so you have to reschedule every other dang game.
June 27, 2011 at 4:10 PM

Barb Matijevich said…
It was really windy so the picture isn't quite clear. The web was GORGEOUS!

@Ei, I don't know how single parents of multiple children do it. There is no way Jane could have done softball this year if there hadn't been two of us because every game conflicted with a class of Ana's. (Luckily, the coach wasn't big into practice so we only had a few of them.) I tip my hat to you, friend.

Susan said…
We had many good years following the girls softball teams here and there. Ana reminds me of my youngest - same haircut and little glasses. She switched to contacts when she was 10 for sports.

Lane said…
If I hadn't already come to love your kids, I'd love Jane for no other reason than her pink and yellow socks! Plus, her softball form's looking good (I used to be a pitcher!), and special congratulations to Ana!
June 27, 2011 at 10:19 PM

Bullwinkle said…
You may have been a mother for 13 years, but summer changes every year. The kids are change, every year. The place changes. Even the dogs are different.

That Bloggess post makes me want a giant chicken :)

Congrats to both kids (and ear scritches to Edward)- learning new things, and being in a place that encourages that, is one of life's greatest joys.
June 28, 2011 at 4:00 PM