Pull up! Pull UP!

You know how I finally seemed to be pulling out of this tailspin I've been in lately? And you know how I've been saying that it's my new knitting group that has saved me since we moved across the country from Austin to Long Island? And you know how I got to help my friend Linda turn the heel on her first sock and how joyous it was to share that moment with her?

I thought I'd repay her by side-swiping her car in front of the yarn store on Knit Night.

Because I so totally ROCK that way.

See, I'd had this really bad Pain Day. As y'all know (because I have whined on and on and ON about it), I live with chronic foot pain due to a genetic abnormality that remained undiscovered until I turned 42 and could no longer walk on my foot. I had an extensive reconstructive surgery that installed three screws in my foot and removed some extra bones (SUCH an overachiever) and now I can walk on my foot, but it hurts. It's gotten better or I've gotten used to it or my new medicine is acting as a pain blocker. Most days, anyway.

But yesterday was bad. I lost my balance and stepped funny and the whole day had a funky pain shimmer to it. My husband got in from the airport just in time for me to leave for Knit Night ("Hi, Hon! Welcome home--the kids need baths and the dogs haven't been fed. Gotta go!") and he looked at me closely before I left. "Drive carefully," he said. "You don't seem like yourself."

(When I told him I'd had a car accident, he said, "Yeah, I had a bad feeling about you driving." He knows me a little too well. Or, he's psychic. Or both.)

(Must he always, ALWAYS be right?)

So, I was driving to Knit Night and I started thinking about this segment I saw on David Letterman some twenty years ago. It was the "Small Town News" thing he does and he read this missing dog advertisement about this one-eyed, one-legged, deaf dog who was missing. "Answers to the name of "Lucky."

And I did that thing where I rolled my one good eye and tempted the fates. You know what I mean? I thought, "Man, if things had gotten much worse, I bet that's what people would be calling ME. THANK GOODNESS I'M PAST ALL THAT."

Can't you just hear the Fates all scambling eagerly to get in line in order to whup me upside the head (Texas phrase) for even thinking such a thing? Cue the ominous music.

Because then I drove to the yarn store, which is on a busy street, and in an effort to get a parking place in front, and avoid the guy tailgating me, I pulled over too quickly and clipped Linda's car.

That sickening sound... the way my heart just exploded in my chest... Ack. I threw my car into park and rushed to look at the car I'd hit. The damage seemed mostly superficial but it was already dark and hard to tell. I hobbled into the Knit Shop and asked, "Who drives the cranberry colored Maxima?" And Linda said, "That's mine." and I said, "OH MY GOD, I JUST HIT YOUR CAR!"

Or something equally panicked to that effect.

You have to know Linda but she was already trying to make me feel better as we went outside to look at the damage. I could not have felt worse and probably looked like I was ready to throw myself under the wheels of a passing truck. I was totally, utterly BESIDE MYSELF that not only had I had a car accident, but I had hit the car of possibly the NICEST KNITTER IN THE STATE OF NEW YORK. I said breathlessly and apropos of nothing, "I answer to the name of Lucky." and Linda assured me the damage was hardly noticeable and then she told me the funniest story about a dog named Lucky that I've ever heard. We went back inside and everyone went back to knitting and telling car stories and trying to make me feel better --because, dudes, that's what knitters DO. Linda promised to have her husband look at the car and to tell me honestly if he felt it needed to be fixed and she gave me about six hugs--because she is so KIND and NICE and LOVELY that way --and I sat there, trying to regain my equilibrium.

A task in which I was not aided when Laurie showed me how I'd been doing the increases on the sleeves to Ana's sweater WRONG. (Sigh.)

I was still so frazzled that I had to pull over and start up my GPS on the way home.

This morning, Linda called at 8:30. She said she hoped it wasn't too early but she knew I would be worrying over her car and she wanted to tell me as soon as possible that her husband had looked at the car and proclaimed the scratch to be "nothing."

I went back out to look at the car and noticed another longer scratch higher up on my car so I called her back. "Linda, go look and make sure there's not some OTHER scratch up higher on YOUR car."

She reassured me that there was nothing at all there and told me firmly to not sweat the small stuff and that this was small stuff.

And then her HUSBAND called me to tell me it really was nothing at all and to please not think about it any more.

Because that's how nice these people are--I HIT THEIR FREAKING CAR and they are worried that I'm so upset.

When I went back out to look at my car, I also noticed that a long strand of yarn was hanging out of my passenger-side door. Apparently, in all the drama, a ball of yarn had escaped and I hadn't noticed. Naturally, it was a ball of Claudia Hand-painted yarn in Plumlicious, which I FINALLY found in sport weight in order to finish Ei's socks. The ball is gone, left along the road along a route only the GPS knows, and there's not enough yarn to finish the toe of the sock. 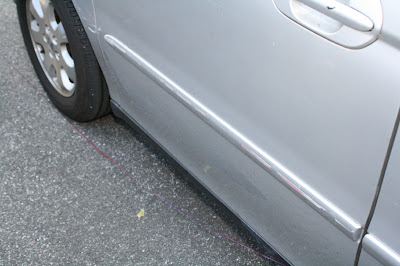 Of course I drove home trailing hand-painted sock yarn behind me. Doesn't everyone do that after smashing a friend's car?

Just call me, "Lucky."
Email Post
Labels: Enough With The Whining Already Everywhere Are Signs guilt knitting Life in the Modren World Maybe I Should Just Shut Up My Life is so STUPID the Glamah of it All

Unknown said…
Oh. Dear. What a bad night. But the dangling yarn is just too funny. Have you checked your feet for trailing toilet paper?
October 24, 2008 at 1:50 PM

Anonymous said…
Okay, honestly? Linda and her husband are seriously nice. Are you sure they live in NY? I cannot believe you trailed a ball of yarn all the way home. Do you live more than 450 yards from the yarn store? It would be kind of funny if you had been able to rewind it all back up... Some day, you'll be able to link to this and laugh... ;)
October 24, 2008 at 3:15 PM

~Jody said…
LOL - I have visions of you being able to wind the whole ball back up and wash it up good as new - like in cartoons. The thought made me smile despite the sadness that you lost a whole ball of yarn :)
October 24, 2008 at 3:59 PM

Beth in Seattle said…
What a night. S**t happens. It seems like the stars and the moon just aren't lined up for you right now. You know - what goes around, comes around - you've done many a good deed and will pay this good will from Linda forward. I'm trying to think of some more cliches but the well is dry. Hang in there. I hope your foot is better today.

I think I'm just going to go have a wee drink for you, mmkay?

MadMad said…
Dude... that yarn thing just takes the cake. You really are "Lucky." Any chance you could you track the yarn back? You know, like Hansel and Gretel, but with yarn?
October 25, 2008 at 11:21 AM

There must be an epidemic of toe-hurt going on. My daughter had toe surgery and just Saturday had her toe "cranked," as the doctor put it. http://thesillythingswedo.blogspot.com/ She says it is not a pleasure.

Your story is so funny, you had me laughing all the way to the glorious yarn being tailed behind the car on the way home. I hope some lucky bird finds what's left of it and uses it to weave a nest in the spring.
October 27, 2008 at 1:22 AM

LaDonna said…
OK, so I go offline for 3 days in a row and this is what I come back to...Oh, Barb! I want to send you some more hugs! I have to admit, I was shaking my head in sympathy and nodding with empathy all the way until the yarn trailing out the car door...

Sherry Sea from Austin said…
Well, that street is really busy and a little tight, you know? Having the luxury or being able to walk a bit, I just refused to park on it. And it was very nice of Linda and her husband to reassure you.
October 28, 2008 at 8:23 PM