Brace yourselves: I have been too sick to blog.

I KNOW! I didn't think that was possible either but there ya go.

I blogged a lot to you all in my head but I still haven't refined my mechanism for Telepathic Blogging so y'all probably didn't get those transmissions. There was some good stuff there. I'll try to recreate over the next few days. I wish I was a better note taker. I just found a scrap of paper on which I have written, "What's with all the hvelswiffin?" I'm sure that would have been a hilarious blog post, written under the influence of cold medicine and all, but darn if I know what I was talking about.

As, well, not an aside, really, but just an extraneous whine: why is it that when I get a cold here in New York, it ends up being the Mucus Producing Scourge of Death and Fatigue and Dry Skin for Days on End? Seriously, are there no SNIFFLES in New York? Must every cold threaten to send one of my lungs flying out through my nose?

In addition to this new development where I cough so hard that I have to sit down, exhausted, while brushing my hair, the other news on the Cooper front is that we had more than a foot of snow on Sunday. Schools were even closed on Monday! We were so primed for fun--only not really because we were all so sick. Coop has also been sick with a cold-- one so invasive that he ended up with an ear infection and on antibiotics. That means three of the four Coopers were on antibiotics at the same time for ear infections! Dudes, you can't BUY that kind of glamour!

Anyway, I hope to return with ever-so-witty musings about, well, SOMETHING very soon. Meanwhile, I leave you with a picture that epitomizes what really happens when Texans move to New York. 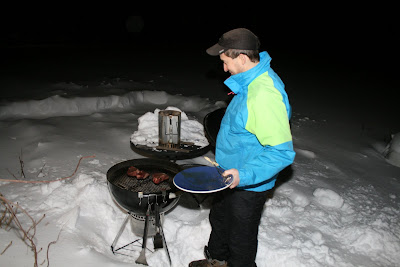 Kathy Ireland said…
Don't take this the wrong way, but I am so glad that it was NY that got that 12" of snow. We didn't get any. It's been colder than I can ever remember it being, but OMG, somebody loves us, no snow.

Suna Kendall said…
I hope you are all much better soon. And that is very pretty snow. It did get sorta near freezing in Austin over the weekend. Luckily my red bud tree can take it!
March 3, 2009 at 5:19 PM

MadMad said…
Ay! It's probably that you're getting acclimated to New York, or some such thing. Love the griling shot! Feel better soon!
March 3, 2009 at 8:44 PM

Anonymous said…
Love me some grillin' in the snow! When I first moved to MA with my husband, I was appalled by 2 things. 1. He had an *electric* grill. 2. It was stored away in the garage come Octoberish. Now, that we're back in Austin, he has quickly become acclimated to grilling year round and has realized that a glorified George Foreman grill does not a grillmaster make.
Feel better soon! Pax.
March 4, 2009 at 9:25 AM

LaDonna said…
So sorry you're sick, but please please please keep the snow! I keep meaning to do a response to the blog post where you wonder when you're supposed to get sick of the snow...complete with pictures and videos, but every time I try, it just depresses me. Is it spring yet?
March 4, 2009 at 12:04 PM

Unknown said…
oh hell yeah, i grill all year round.

and by the way, No, you cannot snorgle a Throg's floof. it's a well-known fact that Throges have sharp clawses and teefses and do not appreciate floof snorglingses.
March 4, 2009 at 12:55 PM

Mary Ellen said…
It might take a few years to get accustomed to our east coast germs. They're pretty tough, since they have to survive these extreme conditions!

I will patiently wait for you to get well and tell me everything I need to know about hvelswiffin.
March 4, 2009 at 1:46 PM