(If you do not care about my diet or my knitting, you should just skip this whole post because it's not so entertaining even for people who are interested.) (Although, if you want to scroll down, there's a good picture of my cute husband at the bottom.)

I promised not to make this a weight loss blog, didn't I?

I meant it, I really did. I know y'all are much more interested in my knitting --speaking of which, look at this picture of Edward modeling the present I knitted for my friend Two-N-Anna. (As always, click to embiggen.) 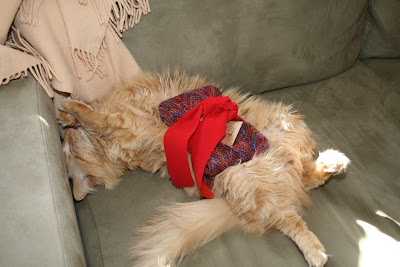 I think it may be the best thing I've knitted so far, but we knitters always think that. (Because I know some of you really DO come here for the knitting: that's Manos del Uruguay silk blend in 3106 Autumn. The pattern is something that's been going around my LYS (Local Yarn Shop) and I don't know to whom I should attribute it. BUT, I will tell you that it's fairly easy and also, that it doesn't look good in every colorway. I was so enamored of the colorway 3120 Oliveway, that I bought it and immediately cast on a second scarf and it looked like what happened the time that my ridiculous cowdog Scout ate an entire skein of Noro Kureyon and then had the world's largest furball EVER. (Sorry, was that too much information? Too much of a visual? I'm sorry. I'm dieting and cranky. Please forgive me.))

Here's another picture of the scarf in progress. 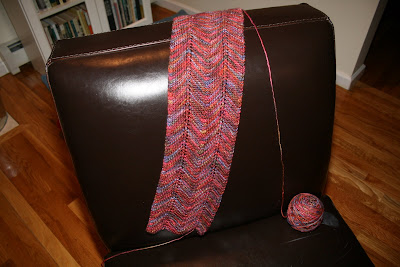 If you would like the pattern, e-mail me and I'll send it to you.

The fun thing about the scarf is that my mom was here and she knitted the same one in a different colorway for a friend of HERS. And it was sort of magical and wonderful to have a little knit-along with my mother. I think she liked it, too because we're going to do it again. I can't seem to convince her to try socks but we have found a project to knit together over the distance anyway. She's having a second hip replacement on Monday and while she's recovering, we're both going to knit blankets. We found this yarn we love (another Manos, this one a variegated brown from the Clasica line) and are working on what patterns we will do. Mom is going to do big squares and sew them together. I thought I'd try knitting the whole thing at once but I am about to rip mine out for the third time now because I haven't quite gotten exactly what I want yet.

But that's okay because I have lots of time to knit because I'm not, you know, having any other fun. Not drinking wine. Not eating chocolate, or anything else with sugar in it. Not eating bread.

About the South Beach Diet and why I chose it: I chose the SB diet because it's a healthy diet (a lot of people lump it in with Atkin's but it is not the same) and it works with my particular dieting style. I don't have to weigh or measure anything as long as I stick to the food list (at least these first two weeks) and that's a good thing for me. Food isn't so much my problem, anyway --except that I would sell my soul for freshly baked goods --it's more the lack of exercise that's caused my weight gain. I hope to begin to remedy that as soon as I get my orthotics on Thursday.

(Would you all mind just looking upward and saying a fervent prayer to the FSM (or your pasta deity of choice) that the orthotics work and I can go for a walk or work in my garden or...well, GET OFF THIS COUCH soon?)

At any rate, I think it's working because after two whole (interminable) days, I already have less of a belly. Maybe.

Plus it feels good to be doing something and to be exercising my discipline that has lain fallow for at least the past Year of Pain. I feel energized by this new resolve of mine--on Friday, I actually submitted some writing for publication! (Not to a PAYING publication or anything, but still.)

My husband, who does not believe in dieting, has managed not to say a single negative word about my latest endeavor and indeed, went to the grocery store and stocked up for me. I love a man who can both hold his tongue AND navigate the grocery store on a Saturday. Dude ROCKS.

He does believe in discipline, though, as evidenced by this photo of him about to set out on his bike ride yesterday. Dude rocks HARD. (Plus, it doesn't hurt that he looks so good in Spandex.) 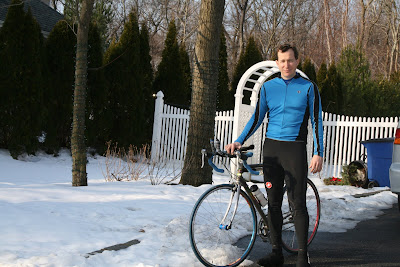 The snow seems to be finally melting away from the last snow storm, which was a bit much, even for me.
Email Post
Labels: A picture is Worth at Least Ten Words Bum Reduction Project Coop Edward Freaking Fat Genes knitting Winter Wonderland yarn

Stefanie said…
If that pattern were to end up in my inbox, I certainly wouldn't complain!

Maggie said…
The knitting is great, the exercize is good for all of us, I need to do more, and the man and bike are nice looking..
I don't know a thing about S.B. diet, here it's leave the M&M's alone and be more active...I don't want any of that white stuff I see in your man and bike photo...
March 8, 2009 at 5:51 PM

Sherry Sea from Austin said…
The cat's pretty dishy and the husband's not bad, either. I'd ask for the scarf pattern, but no promises on when I'll start it.

deb said…
Love the scarf....I'd like it, please! I admire you for being on that botherchucking diet....no carrots? WTH? It's great you have support as my fiance feeds me ice cream with chocolate! Grrrr! and he's skin and bones so does he worry? You're cat's a hoot and love every picture of him. My fiance has two orange cats also and Harley (who I picked out from the cat shelter) is just like Edward. Just a big fat lump of fur and so loveable. deb (MDeborah47@aol.com)
March 10, 2009 at 7:31 PM