Adventures in the City

My husband and I went on an impromptu date on Tuesday.

The thing about living near New York City is that we have opportunity to do all of these exotic, wonderful, cultural things. The other thing about living near New York City is that for much of the time, we might as well be still living in Texas. Trying to make the arrangements necessary to travel that thirty miles to get into the city requires a LOT more planning than just getting in the car and going. For one thing, up here, we plan around the traffic, the same way the people in "Cloudy With A Chance of Meatballs" planned around the food weather. Traffic is a Force of Nature up here. No plans can be made to do ANYTHING without taking it into consideration.

And once you've conquered the traffic, there is the Parking.

I'm still not entirely assimilated. My husband drives in the City (as we New Yorkers call it) and he does it without getting stressed out. I haven't tried driving in the City yet, mostly because just being a passenger makes me want to clamp the oh-my-God bar in my TEETH while simultaneously bracing my feet on the dashboard and covering my head with my arms.

But anyway, the stars aligned and we went to see the Spinal Tap guys in their 25th anniversary tour: Unplugged and Unwigged. Man, those guys can still pseudo-rock! We took pictures, which was ALLOWED, but because we took them with our cell phones (having never even considered that we could bring a camera) they all look like this: 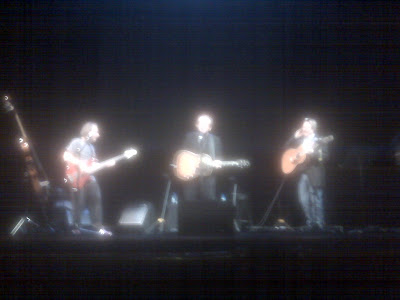 (Why, yes, you can almost see Elvis Costello there in the middle. He popped in to do a song.)

So, there it is: an entire post in which I never even mention the word, "puppy" even once. I know not everyone is a dog lover and I'm trying to serve my audience. Only, um, there is yet another tremendous game of chase going on all over the downstairs and the puppy does this thing where he grabs hold of our older dog Scout's tail and will NOT let go. Scout's only recourse is to SIT on the puppy which, frankly, is one of the funniest things I've ever seen. If I can get it on video for you, I will. Meanwhile, look at how the puppy sleeps: 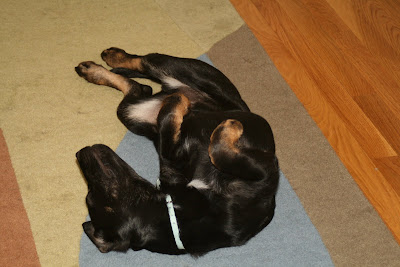 In other news, I've decided to join...well...EVERYONE and venture into the world of Twitter. (Blame Lance Armstrong, who Twitters everything.) You can follow me here: @sothethingis once you go to twitter.com. (I'll figure out how to link and why I'm not able to upload a picture very, very soon. I don't actually know what I'm doing nor how to put the updates on the blog but...well...I have good technical support.) (I'm also back on FaceBook, although this had more to do with being obsessed with a few word games than anything else.)

My washer just went out. I mean that in the sense that it is making this very awful, ominous sound and won't spin anything. (I knew this was coming and was just trying to nurse it along. Ah, well, now whenever I have to spend money I just think, "Hey, way to stimulate the economy!" Y'all can thank me for the economic upturn later.) Any suggestions for a replacement? I know I want a front loader but other than that, I have done no research.

Okay, I'm going to go Tweet unless you all would like for me to talk more about the puppy. No? Are you SURE?

Fine.
Email Post
Labels: A picture is Worth at Least Ten Words Definitely NOT Wordless Wednesday I heart New York Life in the Modren World Texas Meets New York The Great Cooper Move WHAT? Doesn't everyone?

Will watch for you on Twitter. I technically am there but appear very seldom. Blogging is much more my style. (carolynfruit on Twitter)
May 28, 2009 at 11:56 AM

Debbie J said…
I love the puppy picture. Mine isn't a front load machine but I bought a Whirlpool a few years ago and wouldn't buy another one!

It started leaking w/i 3 weeks and they had to come out and put a remanufactured part in it.

Damsel said…
OK, this has NOTHING to do with your post, here, but it just dawned on me that you made the move from Austin to NY a little over a year ago... and yours truly is following in your gorgeous (WALKING!!!) footsteps by moving to NJ. Fortunately, the Army is doing all of the actual moving, and we'll be living on post, but I'd still love to have any tips you can give... especially as we get closer to winter (eek!).
May 28, 2009 at 10:35 PM

Unknown said…
i just have to say that i hated using a front-loader. i'm sure there are reasons why people use them; i just can't figure out what they are... my back hurts just thinking about it. the ONE plus was that it was the perfect height for my 1.5 year old to "help" me. :)
May 28, 2009 at 11:12 PM

Robin said…
Washer/Dryer- We love our front loading frigidairee. We bought them a few years ago. They were rated well by Consumer Reports. Not sure about the newer models. They are my favorite appliances. :-)
May 29, 2009 at 9:52 AM

Tiny Tyrant said…
We have the Maytag Neptunes, though the top loader model, which is just as efficient as the front loader.

I love it, and I hate laundry.

Unknown said…
I have also had the Maytag Neptune front loaders since '02. I love mine and haven't had any trouble. However, they are the height of a top-loader. Taller would be easier on my back.

As someone from the part of Texas where the big cities are Amarillo and Lubbock, I can't imagine that the traffic in NYC could be any scarier than I-35 in Austin at rush hour. If it is, I certainly don't need to be there!
May 29, 2009 at 7:31 PM

kim said…
Um, yeah, driving in the city is not for the faint of heart. But is it really any better to be in the backseat of a taxi driven by a mad driver on his cell phone? I'm not sure.

Sherry Sea from Austin said…
I loved the puppy picture!

My washer is a front-loader, either a Kenmore or a Frigidaire (they're made in the same factory and are the same machine) and it has been fine.
June 1, 2009 at 6:22 AM