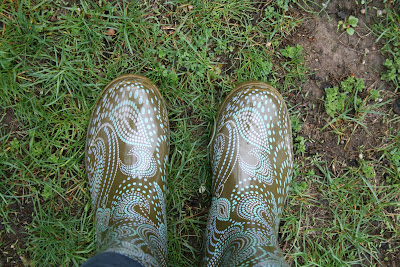 Yesterday, I heard a radio announcer say, "Our latest weather forecast is that it is going to rain forever."

There was a brief respite yesterday afternoon and Jane (8) managed to plant her garden. I would take a picture of it to show you (because it is PRECIOUS) but it is raining. Again. Endlessly. Except for a few hours yesterday.

As soon as the sun came out, the Coopers all rushed outside, including two orange tabbies and one silly cow dog. We're just desperate for a little sun. We didn't want to come back inside...ever. (Unfortunately, neither did one big fat orange cat named Thomas who spent the night outside, trying to hide from the storms. When I let him in this morning and dried him off, you wouldn't even BELIEVE the language he used.)

Anyway, I've been walking around this morning imagining myself as Noah talking to God about the Big Flood. Which I'm quite sure is blasphemous but it's been raining FOREVER and that's just the way my mind works.

"Well, you know, it's raining. No, that's too mild a term for what it's doing down here. It's storming like a mother. We're talking Biblical proportions, God."

"I know that was the plan. No, no, we're doing okay. I mean, my feet haven't been dry since all this started and a large percentage of the animals are experiencing some sort of intestinal distress. The squirrels won't stay out of the birdseed...but you know, we're all surviving."

"It's just that...God? I don't want to tell you how to do your job or anything but God? The animals and I have talked it over and we all agree that forty days is just a little...well...excessive."

"No, I know you're angry. It's your creation and you have a right to be angry but I'm just saying..."

"I just think forty days is too much. We're all so depressed, God, and no one has invented anti-depressants or those lamps that make fake sunlight --or, um, well, electricity to run them. It's really dark inside the boat and I'm not one to complain, but it smells like wet dog. No, like six THOUSAND wet dogs. Spirits are really low, God. I had to stop a cow dog from leaping overboard yesterday. It's a bad day when animals are trying to take themselves out of the gene pool. Even cow dogs."

"Well, I don't know, what's it been? Ten days so far? Is the rest of the planet under water? How long do you think it will take for the floods to recede? REALLY? That long? You can't...um...speed that up a little?"

"Well, no, I understand. Unions are everywhere these days --I just thought maybe they wouldn't be in Heaven. I guess the angels have quite the lobby when they get together on something. And I know you've got other things to deal with and a new covenant with the people to draft. I'm not trying to add to your burdens."

"Maybe we could just have an afternoon of sunshine? Just to air the place out a bit? Aw, thanks, Big Guy. That'd be great." 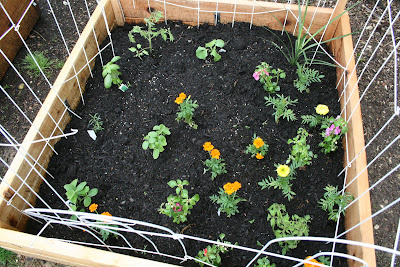 Email Post
Labels: cats dogs Enough With The Whining Already humor Love Thursday Maybe I Should Just Shut Up Not enough therapy in the WORLD squirrels WHAT? Doesn't everyone?

knittergran said…
We've been having lots of rain in the Atlanta area too. And we would complain, but that would be just wrong, since we've had several years of drought. But we DO whine a bit.
And, I'm so glad you let your daughter have her own garden; I really, really wanted my own when I was a kid, but never got one. It would mess up the lawn, you know. 8-(
May 7, 2009 at 11:00 AM

LaDonna said…
Check out my Fargo flood pictures on Facebook. The rain may be depressing, but as for the flooding...I don't think you have to worry yet ;)
May 7, 2009 at 11:18 AM

hollygee said…
I don't know if my comment showed up -- I hate OpenID.

Mary Ellen said…
One of the many reasons I love your blog is that you have this kind of stuff rattling around in your head - and it makes me feel less crazy for having other equally odd things in mine.

The Dister said…
If you haven't yet, you have GOT to read a book by Chris Moore called "Lamb. The Gospel According to Biff, Christ's Childhood Pal"

Ann in NJ said…
As I type, it's thundering again. Welcome to spring in the Northeast - believe it or not, they tell us we are actually several inches SHORT of rain this year. Even though it feels like it's been raining forever. Just remember this when we hit the three H's - hazy, hot, and humid. When a rainstorm to move the air would be welcome!
May 7, 2009 at 2:01 PM

The Dister said…
Oh! and...are those your boots???

Miri said…
LOVE the boots. And of course your sense of humor. I was thinking about Noah yesterday. In that "does everyone think I'm nuts" kind of way. Sending some Oregon sunshine your direction. Ha hahahah I crack myself up.
May 8, 2009 at 10:14 AM