(This will be the second telling of my weekend tale because Blogger ate my first one. Which was better. Well, okay, I don't KNOW that it was better but it just seems like the one that gets deleted is ALWAYS better.)

A few weeks ago at Knit Night, I was talking about my current project, which is a blanket done mostly in double moss stitch. I was saying that the stitch is deceptively simple because I can't knit it if I've had more than one glass of wine. My friend Martha started to laugh and suggested we should have some sort of rating system for stitches. Like, one to four wine glasses. I loved the idea! So, then, naturally, I started thinking of all the other things that need ratings systems like that and what the possible symbols could be.

Take this weekend, for example. I thinking this was a three toilet kind of a weekend.

I am writing this from a Laundromat.

I haven’t been inside of a Laundromat since 1990.

For example, all of the machines are front loaders. (Apparently, I am the last person in America to join the front loader craze. Mine, however, is being delivered on Tuesday.) 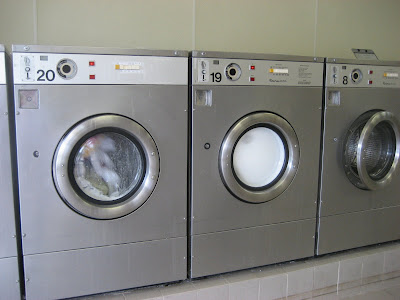 Also, the prices are insane. I guess those front loaders are expensive. (Well, okay, I don’t GUESS at that. I know. Because I just bought one and it’s being delivered on Tuesday. Tuesday will be a banner day at the Cooper Clubhouse.)

The loads I am washing are $6.00 each for the giant ones and $4.50 for the smaller ones. There are only two giant machines and I am using both of them, as well as two smaller ones. (For those of you keeping score at home, that's $21.) 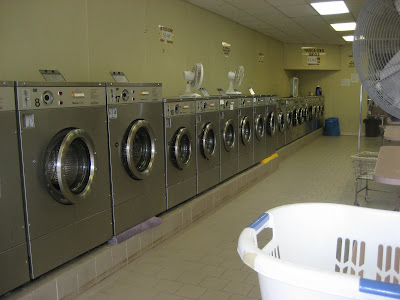 Now, I realize that you are sitting there scratching your head and wondering why I am doing so much laundry today when my new machine will be delivered on Tuesday. (TUESDAY!) Especially because you know me and I have something of a laundry fetish and therefore was completely caught up on the laundry when the washing machine broke last Thursday.

Ah, I am resisting the urge to make all sorts of bad jokes about what a freaking craptastic weekend it’s been –and oh, my goodness, I just SO mean that both literally and figuratively.

On Friday, my husband Coop went on a “bonding with the guys from work” overnight trip and my older daughter Ana went out to a movie and then out to eat with Two "N" Anna and Nina. Ana got home at 12:40 AM. (I waited up. Because I'm a mom and I think it's in the job description.) Then, as we were all almost asleep, one of our orange kitties, Edward, started throwing up and trying to poop all over the upstairs. He's had some sort of intestinal blockage in the past and I was very afraid that's what we were dealing with. I think I slept from 2:30 - 4:30. He fouled my bed at 5:00, then our older dog SCOUT started barking to go out at 5:30. NOT the new puppy, Austin; the older puppy Scout. Like most older siblings, Scout regressed when we brought the baby home.

So, I got up with them and drank an entire pot of coffee and then made an appointment for Edward at the vet. I was going to drop Jane off at a birthday party party first but it was the weirdest thing --there was no one at the house! The party was supposed to be from 10:00 - 12:30. We got there about 10:10 and no one answered the door. I had the invitation with me and we double-checked the date and address and there just wasn't anyone there. There were three cars parked beside the house and all looked fairly normal...but I got a funny feeling. (I'm allowed to listen to those funny feelings because that, too, is in the Mom job description.)

So I took Jane with me to take Edward to the vet. By then, he seemed to have worked through whatever his blockage was but Dr. Jeff (love him) told me to call him at home if anything came up. Edward peed all over the carrier and we brought him back home.

Since Jane didn't get to go to her party, we had a little birthday party at the house. I baked a cake. Yes, from scratch. Because Jane was sad and she said that the cakes *I* make are better than the store bought kind. We checked and double-checked the address and the maps and everything and came to the conclusion that maybe the party had been canceled. Jane said she felt sorry for her friend if the party had to be canceled and that she wanted to take the present to her friend at school on Monday.

I am such a sucker for that kid.

Except that later in the afternoon? Janie let the F-bomb fly in front of our neighbor's children and was so mortified that she ran into the woods. I was plenty embarrassed, too, but honestly? I can kind of understand it. First of all, I don't think she meant to say that particular word. She said she said it on accident and I believe her. I know, I know, I have fallen for more than one Jane story. But she just recently learned what that word was and it's been kind of burning a hole in her pocket (so to speak) ever since. You know how you can be trying so hard NOT to do something that you accidentally do it? I think that's what happened. (I'm a mother and I choose to believe her. See the mom job description --it's allowed.)

So, anyway, we sent half of our cake over the the neighbors via one adorable, repentant courier who had an apology at the ready. My husband came home at about 7:30, having gone to the grocery store. Things were looking up.

The next morning, I was awakened when Edward pooped on the floor of my bedroom. My husband had gotten up to let the dogs out and had left Edward shut into the room with me and Edward, still having some issues, just couldn't hold it. I stumbled downstairs, got all the cleaning stuff, cleaned up and then fed all the beasts (human and other.) Coop was out on a bike ride.

Meanwhile, we have no washer (New one: Tuesday. Yea!) and six million loads to do. Also? I had to put all the dirtied sheets, comforter and towels in the garage because they were so stinky. So, I loaded up the car and headed to the Laundromat, where I sit writing to you now.

(Or I WAS writing to you from the Laundromat, until Blogger ate my post. It's now Monday morning and there have been many more incidents in which poop figured largely. I think I might actually have to upgrade the weekend rating to FOUR toilets.) (Listen, there are other symbols but this one doesn't make me want to throw up.)

(Also? To add to the general surreal aspect of the weekend, this is what I saw when I opened the door of my car in the Laundromat parking lot: 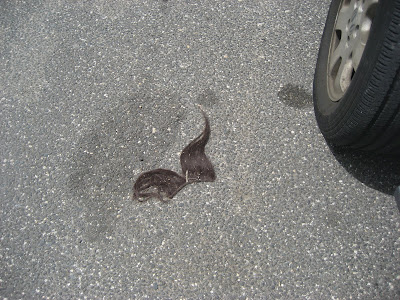 Yes, it's a fake mustache. Of course it is.)
Email Post
Labels: Coop humor? My Life is so STUPID Oh the DRAMA pets poop The World According to Jane

Unknown said…
just got back from vacation and came here first for my puppy fix (and got bonus edward and thomas shots too!)

smalltownme said…
Holy cow! I only had to deal with a clogged toilet and a water balloon battle.
June 1, 2009 at 1:41 PM

DK said…
Of course it is.

Ohh, so sorry it's been a four-toilet weekend. Although I will confess to laughing out loud at Jane's f-bombing. It's an exceptionally good week when I manage not to swear in front of any of my patients.

And besides, they got cake out of the deal. (I also think the birthday party story is a really cute Jane story. I wonder what happened...)

Susan said…
People say that appliances are inanimate objects but I know better. They work inversely to how urgent you need them. So of course you had animal upchuck and poop to deal with while awaiting your new washer and dryer. It's a weird karmic thing.

I know that the copier at school knew exactly when to jam - when I had report cards to copy just before I had to send them home. And then when we started doing our report cards on computers, the printer was linked telepathically to the copier so that it, too, knew when perfect malfunction time was.

You should have woken Jane up in the middle of the night when s*** was flying and she could have used the f-word appropriately for you and gotten it out of her system. It was a missed opportunity but I'm sure you'll remember next time.
June 1, 2009 at 3:31 PM

Susan said…
I had a similar shock at the laundromat a while back - but no poo took me there, just slow to get repairs done landlords.
June 1, 2009 at 10:50 PM

Mokihana said…
Wow Barb. And I only had to deal with a having to buy another car because hubby's car died weekend! (No laundry involved.)
June 2, 2009 at 10:38 AM

Sherry Sea from Austin said…
Your tales of the laundromat are fun! Sorry about all the, er, droppings.

I, too, have been laundromat-bound for the last 8 weeks. One adavantage is that you get in and get it done. Laundry was just a footnote in my life, for a time, and that was refreshing.
June 5, 2009 at 8:50 AM